The scene that scandalized Skopje citizens – a pile of garbage thrown down from the windows of the student dormitory Pelagonija in Skopje – provoked the city authorities to clean the garbage that was left by the future academic citizens under their own noses. The cleaning activity continued through the rest of the student dormitories and schools throughout the city, as it became clear that it was not an environmental “incident”, but an everyday life and a type of behavior. Nezavisen Vesnik/Independent daily newspaper investigated who is responsible for the hygienic chaos in the Macedonian metropolis, why citizens in the city, when it comes to the environment, behave as if they were just passing through, why the institutions are not educating enough and then they clean out the mess, and how to change it.
Tens of beer cans and food waste were scattered again yesterday behind the Pelagonija student dormitory in the Kisela Voda settlement. Entire bags of waste and garbage were scattered right over the fence of the dormitory. There were three garbage containers just a few meters away. They were all empty.

Candy bar wrappers, paper tissues and plastic bottles that are recyclable in almost all of Europe, these things can be regularly seen on the streets of Skopje. The role of garbage bins remains neglected, and there is also garbage in the parks, on the lawns, benches, stations, buses, schools and kindergartens. The question is why it is so and how hard it is to hold on to it until you see the first trash can or container, sociologist Ilija Aceski, who has researched the people’s attitude to the environment and their surroundings, notes that all societies, countries or communities that have an annual GDP of less than five to six thousand dollars face the same problem with hygiene.
“In organized societies, rules of behavior are learned from a very young age. The education begins in kindergartens, later it continues in higher levels of education, and family plays an important role as well. Our country lacks this kind of education. Educational institutions and families are the first medium that plant the love for a healthy environment in their children,” Aceski says.

He explains that in times when many citizens can barely make ends meet, and some of them even face substandard living conditions, it is delusional to expect a high degree of awareness for the environment.

“They are simply preoccupied with other problems, therefore the problem with hygiene or pollution does not even exist for them. We are all under the pressure of this unhealthy lifestyle. We are indifferent to the fact that things in general do not depend on us, it deviates us from behaving more responsibly, we see what other people do, so we tell ourselves that we should do the same, but we have to start somewhere,” concludes Professor Aceski.

NGOs estimate that Skopje is generally a filthy city, without a building plan, with not enough green space, without a quality system of wastewater, without regular sidewalks, drowning in mud and dust… 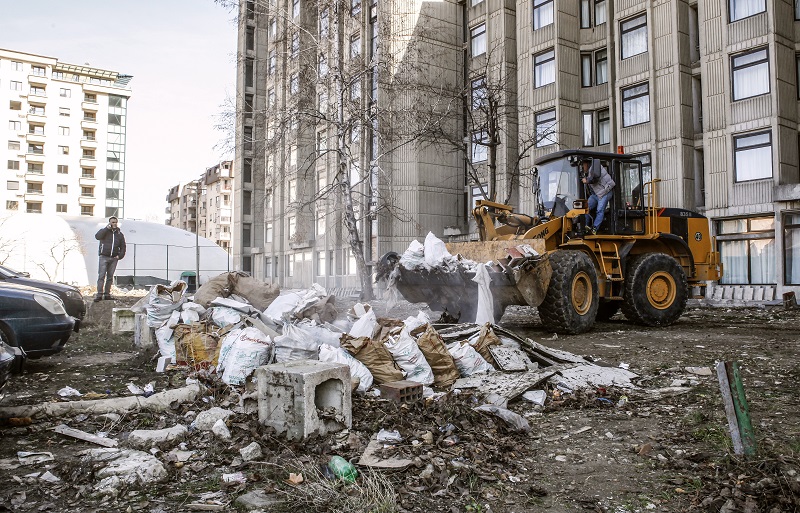 “The state of hygiene inside and around the city can and must be better. Skopje is not even at the level of poorer cities in the neighborhood. I would point out two major problems: one is the insufficient infrastructure, the other is the low awareness of the citizens. Institutions must invest heavily in collecting and selecting waste. I must admit, the public company Communal Hygiene has been active in the field in recent months; it reacts in a timely manner, cleans and collects, but not even a thousand people would be enough to clean up all the garbage if tens or hundreds of thousands of citizens are simultaneously littering”, warns Blaze Josifovski from the non-governmental organization Ajde Makedonija.

The focus of this organization is influencing the behavior and changing the attitude of the public, the private and the civil sector towards more durable waste management practices through education and raising awareness, offering services and activities by the civil sector.

“It’s a terrifying fact that there are several hundred illegal dumps only in Skopje. We cannot determine the exact number, because while some are being shut down, new ones emerge. The villages that gravitate around Skopje are an entirely different story, they have their own landfills that have survived for years and are the main source of diseases,” Josifovski emphasized. Director of Communal Hygiene, Abdusamed Shabani, adds that illegal landfills are a result of reckless waste disposal.

“We cleared the area of ​​the City of Skopje last year and collected 5,144 cubic meters of waste from illegal dumpsites, an increase of 516 percent compared to the previous year. Any disposal of waste in public areas is a violation of the Law on Public Sanitation and subject to sanctions. In that direction, our Eco-patrol completed a number of activities and was patrolling in coordination with the communal wardens of the Inspectorate of the City of Skopje. In 2018, the Eco-patrol prepared 1,400 informative and educational reports for the negligent citizens, which resulted in significantly reduced occurrence of illegal dumps and improper waste disposal. We are aware that habits are made at a very young age, and that’s why our Education Service held classes on proper handling and selection of waste in 37 primary schools and 20 kindergartens. In addition, we have completed a series of eco-manifestations for the youngest,” Shabani said.

He says that even though they are facing a lot of problems, they daily manage to collect and transport household waste in the city and rural areas, as well as 600 economic entities, and they do this in three shifts.

“Just last year we collected and transported a total of 140,809 tons of communal waste. We maintain the hygiene of six million square meters of public and traffic areas that implies both sweeping and washing. We have a hard time dealing in the utility vehicles department, we have an old fleet, the streets are becoming narrower and narrower, and it is becoming difficult to operate these vehicles,” emphasizes the Communal Hygiene Director Shabani.
Communal Hygiene has a staff of 1,058 employees, 150 of them are seasonal workers through the City of Skopje and 250 through the Temporary Employment Agencies. Most of them are employed in the hygiene sector (street sweepers, drivers, collectors), the rest are in the maintenance sector and in the administrative department.

At the beginning of the year, the company published job ads for hiring 300 employees. Later it turned out that, in fact, it was about regulating the status of employees who were hired through the Temporary Employment Agency and have been working for the public company for more than ten years. Up to 90 percent of them are street sweepers and cleaners, as most necessary at the moment.
“We have overemployment of staff in institutions that is of no service whatsoever. In Communal Hygiene we have another process in which we as a nation say that people working in this company are garbage collectors, that is, that they are usually people who do not have high intellectual abilities and are seen as laborers, so those job positions are unattractive. The enterprise must work more efficiently, be more accountable, have a plan and vision, prepare a real budget and accept a fair payment system. It must not charge per square meter, but according to generated waste production. Simply put: Pay as much as you produce waste. A person who lives alone in an apartment of 100 squares cannot pay more than a four-member family living in a smaller apartment, which, of course, produces more waste. This is the easiest method of charging and that is why they accepted it. Therefore hiring personnel in the ‘Communal Hygiene’ should be more structured, and not just fill the administration with partisan personnel,” notes Antonio Jovanovski from the Association for sustainable development and environmental protection Go Green.

The association’s motto is selection and reuse of waste. As one of the ways to handle the problem with garbage, the association is proposing a cashback system, which works in some of the neighboring countries, with which people will get a MKD denar for each plastic bottle they take to a market or other designated place.

“That way the citizens would be mobilized,” claims the association.

Communal Hygiene owns hundreds of vehicles, but most of them are in defect, so it’s a question of whether they will ever start working again. There are only 26 trucks for garbage collection across the city, and six for street cleaning. The company said that they had 40 trucks for street cleaning 30 years ago, and according to the current needs of the city, they should have at least 60 so that the streets can be cleaned. Therefore, the City of Skopje plans to purchase new containers and trucks for garbage collection. The city also announced that six thousand bins are being procured.

In accordance with the legal provisions, the Communal Hygiene employees can collect only non-hazardous waste.

“Hazardous and medical waste is not in our domain of work, although we, as people, do not rule out the possibility of throwing everything in the containers, which is why our employees are at risk. When it comes to recycling, we recently started with a primary and secondary selection that we want to increase dramatically in the next period, because this will mean that we will take less waste into Drisla, and thus pay less. On the other hand, we also have companies interested in recycled plastic, paper and glass. I would like once again to call for raising awareness of the harmfulness of reckless waste disposal. Garbage should be disposed only in containers, bins and trash cans, and bulky waste should be deposited in our selection centers,” says director Abdusamed Shabani.

As one of the measures to reduce garbage and waste in the city is the introduction of communal police, which will discipline negligent citizens and firms. Following Belgrade’s example, the preparation of a new law that will give authority to communal police officers is nearing completion.

The law is underway, it is being prepared by a Working Group and it should be concluded by the end of March. Some of our current 16 communal wardens will be transferred to the Communal Police, but there will also be additional hired staff. We are moving one step at a time, and our plan for the near future is reaching 120 communal police officers who would respond to the needs of a city like Skopje. As for the penalties, they will be the same as the ones existing in the Law on Public Sanitation. The sum of penalties is not going to change, nor is it a subject of the new law that we are preparing,” says Miroslav Bogdanovski, head of the Inspectorate of the City of Skopje.