Two opinion polls have been carried out in North Macedonia ahead of the presidential elections scheduled to take place on April 21. An opinion poll carried out by Prospekt-M and TV Telma suggests that if elections were to be held tomorrow, over 25% of people would vote in favour of the governing coalition candidate, Stevo Pendarovski, 22,4% would vote the Macedonian opposition candidate, Gordana Siljanovska and 10,9% would vote in favour of independent candidate, Blerim Reka, who has the backing of Albanian opposition. Over 18,3% of respondents have not yet decided if they will participate in the elections, while 17,9% of them have said that they would vote neither candidate. 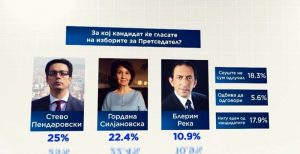 Although Pendarovski is also supported by Albanian governing parties, only 15% of Albanian respondents have confirmed that they would vote for him. Meanwhile, 41,5% of Albanian respondents have answered that they would vote the Albanian candidate, Blerim Reka. The opinion poll also suggests that these elections will be won by the governing coalition candidate, Stevo Pendarovski.

However, a few days ago, another opinion poll was conducted by Makfax think-tank and this opinion poll suggests that the presidential election will be won by Macedonian opposition candidate, Siljanovska with 40,6% of votes.

The same opinion poll shows that the governing coalition candidate, Stevo Pendarovski would obtain 36,9% of votes, while Albanian candidate, Blerim Reka would only obtain 4,7% of votes.