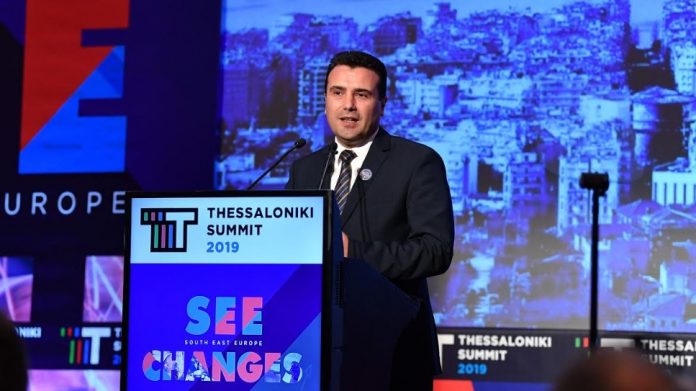 There’s only one road for North Macedonia and Western Balkan countries, that is the road towards the EU. Regional EU integration began right here, with a resolution of the 2003 EU Summit. Bulgaria and Romania were the first of the countries to accede. Now is time to take a step further, so North Macedonia and the rest of the countries can join the EU family, PM Zoran Zaev told a panel on “SEE: Taking forward regional cooperation and reforms”, which took place Thursday as part of the Thessaloniki Summit 2019. Greek and Bulgarian PMs, Kyriakos Mitsotakis and Boyko Borisov, also took part in the summit.

Zaev said that in the past three years, North Macedonia has accomplished a lot, both at home and on an international level. He underlined as one of the government’s leading priorities, the solving of bilateral disputes with Bulgaria and Greece, which made North Macedonia the only country in the region no unresolved issues with its neighbours.

The Prespa Agreement, Zaev added, is an excellent example of successful diplomacy and dialogue. It put an end, he underlined, to a long and difficult dispute.

“The Prespa Agreement is a dignified and acceptable solution for both sides, based on compromise. Our accomplishment should encourage other regional leaders to stay committed to balance and stability, improve regional cooperation, strengthen economic development and show commitment to EU integration. The whole world has recognised our efforts to solve ongoing disputes, and now it’s time to set an example for others and make a step towards goals set 2003 in Thessaloniki,” Zaev said.

He underlined that North Macedonia has fulfilled preconditions to open accession talks with the EU and declared the Union’s decision to postpone this, a historic mistake, which will have a negative effect and send an unfavourable message to the region, as countries find motivation for democratic reforms in EU integration.

“We won’t just sit and wait, but continue strengthening the society and implementing reforms. We’ll continue to fight organised crime and corruption, and won’t back down until we see positive results. EU and NATO membership will benefit not only North Macedonia and the region, but also the organisations themselves. It’s a good strategy for everyone,” Zaev said.

“Come to North Macedonia. Stability and reforms have resulted in economic progress. We noted in 2018, the highest level of direct foreign investments-EUR 624 million. Growth has improved in 2019 and is projected to reach 3,8% by year end. We have developed policies to support business initiatives,” Zaev said.

He added that the country has assisted this effort with EUR 50 million, and the 2020 budget will offer even greater support.

“Regional cooperation and removing barriers for free movement of people, goods and capital opens opportunities for you to profit and will improve our GDP, development and open new job positions. It’s a win-win situation,” Zaev told representatives of the biggest Greek and regional companies.

“From stagnation in interstate relations, we have now come to a point where Greece, Bulgaria and North Macedonia have partnered to transform the region. Strategic partnerships have been established and now its time to support and make room for business initiatives,” said Zaev.