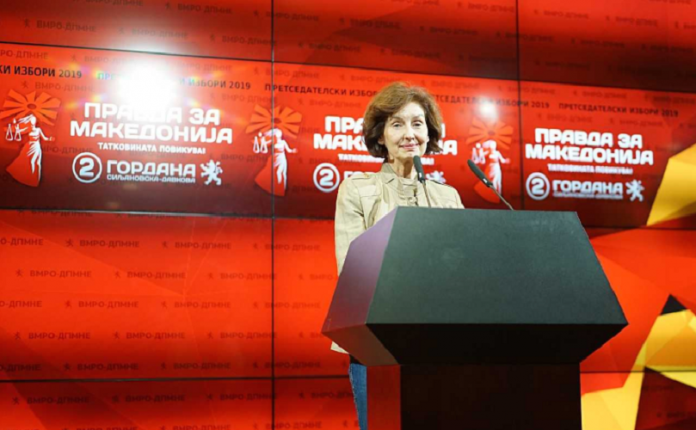 One should not be an expert to conclude that such legitimacy decline has never happened in the history of any European elections. In 18 months to lose 40 percent of the voters, around 200,000 votes is a strong warning not only for defeat in the presidential elections but also expected defeat in the next parliamentary elections, said VMRO-DPMNE presidential candidate Gordana Siljanovska – Davkova.

Siljanovska – Davkova criticized the frequent presence of Prime Minister Zoran Zaev as SDSM leader in the presidential campaign of Stevo Pendarovski, as well as the presence of Defense Minister Radmila Sekerinska and Interior Minister Oliver Spasovski.

Concerning the announcement by the SDSM leader that regardless of the result of presidential runoff there will be a “dismissals”, she said that the holders of the highest functions should be an example in a country.

“You cannot expect the citizens to behave differently if the model of managing the processes and political behavior has nothing in common with the rule of law. We must reach to radical changes, such as the law, the Constitution and the laws apply not only to ordinary citizens, but also to the holders of functions. So far, we have not seen that model,” Gordana Siljanovska – Davkova said.

About the statement of Kosovo Deputy PM Minister of Foreign Affairs Pacolli, who called on Albanians to vote for candidate of the SDSM-led coalition Stevo Pendarovski, she underlined that she has nothing against good neighbourly relations with Kosovo, but, as he said, such a statement is unusual through the prism of one of the UN’s fundamental principles of non-interference in internal affairs.