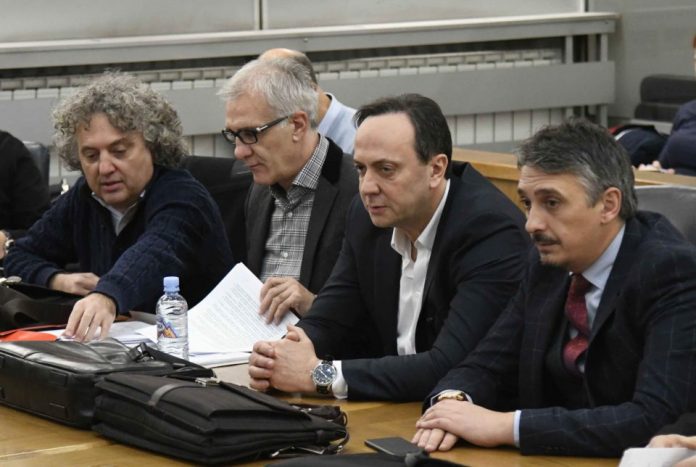 Former director of the Administration for Security and Counterintelligence, Sasho Mijalkov, asks the court for his passport back so he could have his medical treatments abroad.
According to information, Mijalkov went to the SPO with a bunch of medical documents requesting the return of his passport, which is kept in the Criminal Court as one of the precautionary measures, after being released from detention for the “Titanic 2” case.
The Special Public Prosecutor’s Office sent a negative response to the Criminal Court, that is, the prosecutor who leads the case, Fatime Fetai, assessed that Mijalkov did not have enough arguments to get his passport back, and this decision was signed by the SPO head Katica Janeva, or her substitute signatories.
The Criminal Court confirmed that Mijalkov during this month filed a request for his passport to be returned, but the Criminal Council has not yet made a decision. However, they say that the former director had previously asked for his passport back, and that this month he filed his last request.
One of his lawyers, Ljupco Shvrgovski, in a statement for Nezavisen Vesnik/Independent Daily newspaper, says that the reason they filed a request for the return of his passport was that Mijalkov had scheduled an esophageal surgery abroad.
“There is a scheduled esophageal surgery on August 14. This operation is not done here and there is a statement from the Clinic that such operations are not done in our country, but abroad”, Shvrgovski told Nezavisen Vesnik.
Shvrgovski was not sure whether Mijalkov will be treated in Germany or the Czech Republic, but according to unofficial information, the former chief was supposed to be treated in Prague, the European capital that was constantly connected with his businesses. The final decision whether Mijalkov will get his passport back should be made by the Criminal Council of the Court and to decide whether it will accept the opinion of the Special Public Prosecutor’s Office, or not.
Mijalkov, along with Kamchev, is charged in the “Empire” case, a court case that was brought back to the limelight after the “racket” scandal involving Special Public Prosecutor, Katica Janeva. Whether Janeva took money or was abused, as she claims, evidence is still being collected, but the prosecution argues that there is evidence that Bojan Jovanovski took 1.5 million euros from businessman Orce Kamchev.
Kamchev ended up in detention for the ‘Empire” case, and Mijalkov was sent to prison detention even before him for the “Target-Tvrdina” case, but was released around the New Year’s holidays on the proposal of the Special Public Prosecutor’s Office, signed by Janeva. After months of house arrest, Kamchev was released to defend himself with a decision by the Supreme Court. Mijalkov, while he waited for the same decision from the Supreme Court, was sent back to detention at the Shutka prison, after being sentenced to three years in prison for election irregularities in the “Titanic 2” case. The Appellate Court sent him to house arrest, and after sixty days since the decision of  the Appellate Court, he was released because an indictment was filed against him and a fast-track procedure was launched against him.
Six people were convicted of election irregularities in the 2013 local elections, that is, in the “Titanic 2” case. Mijalkov and former members of the SEC, Aneta Stefanovska, Vlatko Sajkovski and Sasho Srcev, were sentenced to three years in prison, DPA leader Menduh Thaci was sentenced to three years and two months, and the highest prison sentence of four years and six months was imposed on Bedredin Ibraimi. An indictment alleging abuse of office and authority was brought against all of them, and Mijalkov was sentenced with an indictment for receiving a prize for illegal influence, a crime for which a prison sentence of up to five years is foreseen. In this case, a prosecution proposal is filed and the so-called fast-track procedure. Since an indictment proposal was lodged against Mijalkov and was conducted in a fast-track procedure, the maximum detention for him was 60 days.
In the “Titanic 2” case, Bedredin Ibraimi was also sent to detention. The Appellate Court also sent him to house arrest, and later his house arrest was canceled completely. According to information from the SPO, he offered real estate in the amount of about 600,000 euros as bail.
Mijalkov is charged in four cases of the Special Public Prosecutor’s Office, and Kamchev is the only one in the “Empire” case. Kamchev was released with a decision by the Supreme Court, but his passport was returned with an opinion signed by the head Special Public Prosecutor, Katica Janeva. The public was surprised to see the suspect businessman celebrating the victory of handball club Vardar with the handball players in Cologne. Janeva tried to justify her decision to return his passport, because allegedly Kamchev had a number of companies and employees who were waiting for their salaries. Kamchev appeared as a witness in the “Torture” case along with journalist Olivera Trajkovska. While leaving the court building, he hugged her and posed together in front of the media, a message that most likely was saying that he will not be taken down. Very soon after that, the “Racket” case was revealed, and the fate of the “Empire” case, for which Prosecutor Lile Stefanova claims to have evidence, remains uncertain. With the new law on the Public Prosecutor’s Office, this case can be taken over by the new prosecutor’s office to be formed. It should now prove the claims that money was pumped out of Macedonia to offshore companies abroad.