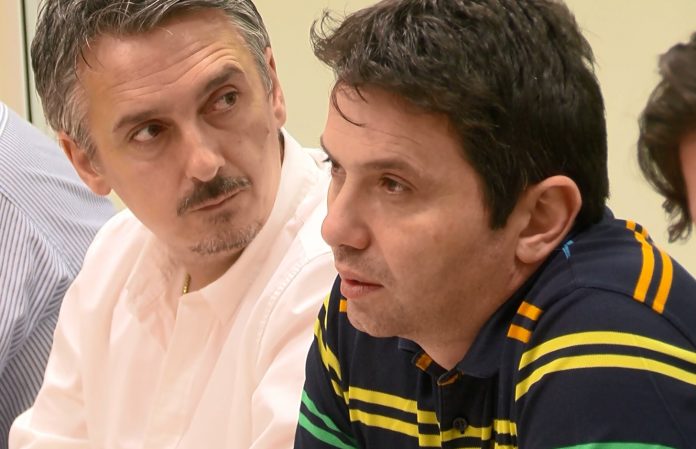 In a short-sleeved polo shirt and handcuffs, Mile Janakieski came to the Criminal Court yesterday for the hearing over the SPO’s “Thaler” case. Before the hearing was postponed, the former transport minister had a chance to briefly talk to his lawyer, as well as with party colleague Ilija Dimovski, who is one of the defendants in the case. Immediately afterwards, he was sent back to the Shutka prison, where he he has been for two weeks now due to the latest case of the Public Prosecutor’s Office for Illegal procurement of state-owned land.
Immediately after the arrest, Janakieski, according to his closest friends and family, went on a hunger strike that has been going on for ten days now. Sources from the investigative prison confirm that he rejects the food offered in the prison facility.
“He is not in complete isolation, nor is he under 24-hour observation, he has a cellmate, we cannot claim for sure whether he eats or not. He receives enough fluids, he was examined by a doctor, who concluded that he is in good physical health,” sources from the Skopje Prison commented.
Lawyer Elenko Milanov says his client will not stop his hunger strike, revolted that he was detained for the latest case, although in the April 27 case the court only ordered house arrest due to his poor physical and mental health state.
“It is evident that the hunger strike is increasingly affecting his health state,” lawyer Milanov said.
Janakieski’s wife claims the fight for justice was conducted this way because the institutions did not have any understanding.
“Their fight for justice was reduced to “arrest Mile again”. And, what? Where are the millions, no billions they said were stolen? Mile is on trial for alleged violations of procedures. Everything else you hear is just propaganda. I’m not asking for mercy! I demand justice!, Sanja Janakieski wrote in her open letter.
The Office of the Ombudsman, whose representatives announced a new visit to the Skopje prison, was informed about the case.
At the end of the working week, the Appellate Court is expected to decide on Janakieski’s appeal for the one-month detention. The measure was determined because of the danger of influencing witnesses and the danger of escape. Apart from him, nine other people are suspected.
According to the investigation of the Prosecutor’s Office for Organized Crime and Corruption, the former transport and communications minister sold them state-owned land at very low prices to businessmen for the construction of hotels in Skopje. They did not fulfill their part of the deal, but Janakieski did not cancel the contracts and did not return the ownership of the land to the state. Thus, the Prosecution claims, the suspects damaged the state budget for 2.6 million euros.