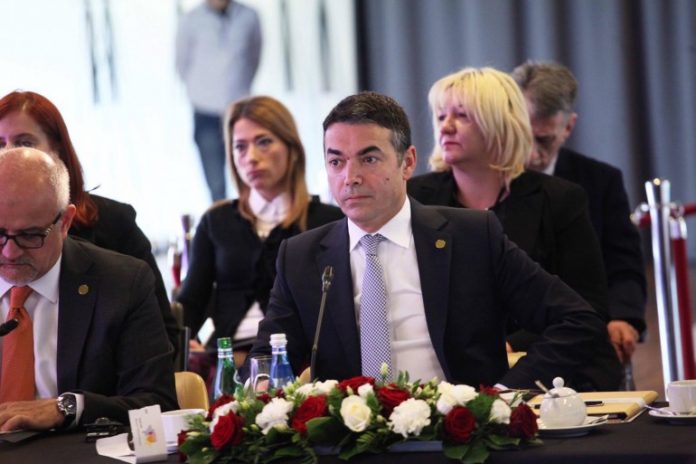 Foreign Minister Nikola Dimitrov wrote on Friday that the Ministerial meeting within the Berlin Process in Warsaw was over, and that his next stop was – home. Since the start of the campaign for the forthcoming presidential elections, the head of diplomacy, who was competing with Stevo Pendarovski for getting the status of a candidate from SDSM until the very last moment, imposed an agenda in all parts of the world, which is why he is not attending at the rallies and promotional events organized by the government ahead of Sunday’s vote.

Although he returned home, Dimitrov did not appear at the SDSM’s central rally in Skopje, where the entire party leadership, as well as officials from the government’s coalition partners, were present.

The impressive absence of the foreign minister, who is not an official member of the ruling SDSM, but by signing of the name agreement with Greece, won over the Social Democrats, provokes public interest, especially since the other internal opponents of Pendarovski (ministers Radmila Sekerinska and Oliver Spasovski) are active in the campaign and give their support every day in Pendarovski’s attempt to get to the Vodno presidential villa.

“The only reason that Minister Dimitrov did not take part in the campaign of the joint presidential candidate Stevo Pendarovski so far is his absence from the country. His visits to Washington, Berlin and Warsaw were extremely important and he had to attend those meetings. Immediately after Pendarovski’s election as the government’s candidate, Dimitrov publicly wrote on Facebook that the choice between Pendarovski and Siljanovska was not at all difficult and wished him luck,” claimed the foreign minister’s closest associates.

However, the information coming from SDSM’s headquarters on Bihac Street claims that there is dissatisfaction in the highest circles in the party with the fact that the campaign is missing a chance to show full unity and unification. In that sense, there are also comments that FM Dimitrov never personally called Pendarovski to ask if he needed any help, nor did he congratulate him on the election.

“On the other hand, Sekerinska and Spasovski are here all the time, they don’t find it difficult to go door-to-door and to seek support for Stevo Pendarovski. They also attend all rallies, wearing t-shirts with the slogan used by Pendarovski,” sources told Nezavisen Vesnik/Independent daily newspaper.

The ministers of defense and internal affairs, are pure party staff who have passed all levels, which is why they have a high rating among the party membership. They, however, quickly left the race for the government’s presidential candidate, because the polls made by the party showed that Pendarovski and Dimitrov are better accepted among non-party members.

Although there were talks that Foreign Minister Dimitrov should be rewarded with a presidential post due to the burden he took on his own back by placing a paradigm of the change in the constitutional name, SDSM decided to go with the candidate who failed to win in 2014, but is relatively clean in politics and thus cannot be affected by a dark campaign.

In his only address through social media, in which he pointed out that Pendarovski is a better choice than Siljanovska, FM Dimitrov first talks about opening key perspectives for the country through proactive foreign policy, leadership and visionary patriotism, alluding to the name agreement. He stressed that we should now take advantage of the opportunities.

“NATO membership has become a reality. There is a real hope at the London Summit in December this year to participate as a full member. The success of the agreement with Greece, preceded by a Friendship Treaty with Bulgaria, has caused an avalanche of international greetings as great news in the sea of ​​bad news. This positive wave, the EU simply cannot fail to valorize, if at the same time we offer sufficient reform arguments. The last major reform step was the extension of competencies and the selection of the Anti-Corruption Commission. Now the Parliament needs to find strengths and take a few more reform steps. First of all, I mean the Anti-Discrimination Law and legal solution for the future of the SPO and its work so far. Prepared this way, in June we will have a real chance to catch the European train. We are obligated before future generations to do everything we can to be inside. I do not know when the next one will pass. The whole society will have to go on this journey: politicians, parties, the NGO sector, the media, the citizens, etc. We need a fair, peaceful and democratic presidential election, and a choice of president that will be a principled government partner in the realization of the historical goal. Principled partner, but also a corrective to the way of conducting a policy. I think that the choice between the candidates, especially between Mrs. Siljanovska and Stevo Pendarovski, will not be particularly difficult one. Good luck, Stevo,” Dimitrov wrote on Facebook.

During the first week of the presidential campaign, Dimitrov went to Washington where he participated in the NATO Foreign Ministers’ Meeting. Then he went to a working visit to Berlin, and eventually to Warsaw where he attended the ministerial meeting within the Berlin Process, which ended on Friday.