дома Macedonia Tusk: You stood by us, we will do the same

I feel there is a change in the political mentality in Macedonia and real will to move the country forward in its Euro-Atlantic integration process. I see brave leadership focused on the future. The EC recommendation is the best proof that Macedonia’s efforts have impressed many in Europe, said European Council President Donald Tusk on Friday.

He told a joint press conference with Prime Minister Zoran Zaev there is no better place than Skopje to end his Balkan tour.

“A lot has changed since 2015, when I came here with our partners in order to stop the migrant influx. The Balkan route has since been closed and that is how it should remain,” said Tusk while addressing the media in Macedonian language.

He thanked Macedonia for the closure of the Balkan route but also its support in the Skripal case.

“You have demonstrated solidarity in some geopolitical issues such as the Salisbury case. You have stood by us and we will do the same. EU is the biggest hope for your citizens,” said Tusk.

Regarding the importance of good neighborly relations, Tusk said the Bulgaria Friendship Treaty has shown there is will to overcome ghosts of the past and a way to move forward into the future.

“I hope you will achieve the same with Greece. You have my unconditional support and I believe in you,” said Tusk.

He added that the EU would support Macedonia in its reforms, with all ingredients for success already there – political consensus for EU and NATO membership, as well as citizens’ commitment.

“EU is and will remain the region’s most credible partner. The Union is the largest investor, donor and trading partner in the region, including Macedonia. About eighty percent of your exports end up in the EU, 13 percent in the countries of the Western Balkans, while only 1.5 percent in Turkey, and one percent each in Russia and China,” underlined Tusk.

PM Zaev said Macedonia would like to assure EU member-states that it deserves to receive a date for the start of accession talks, which has never been closer.

“We are resuming with the same tempo, reforms will become more visible and concrete,” said Zaev while announcing Plan 18 that is being drafted in cooperation with the European Commission. 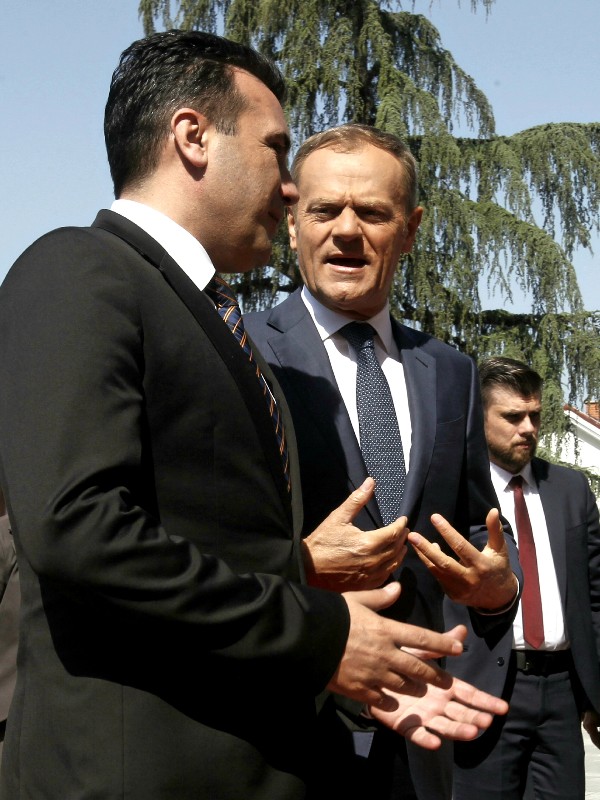 Following the EC clear recommendation for start of the Union accession talks, Tusk’s visit is seen as added acknowledgment, encouragement but also responsibility for the country.

“We have the responsibility to resume with the same transformation tempo in line with EU standards. There is no time to relax, we will double our efforts in the coming period,” said Zaev.

He stressed that Macedonia is prepared to catch up with regional states that have already launched the EU accession talks.

“We have a concrete objective ahead of us, we have never been closer to an accession talks date. This is a big incentive for us, securing the citizens’ economic and security perspectives,” said Zaev.

According to him, the signing of the Bulgaria Friendship Treaty overcame skepticism, with the focus now on finding a solution to the name issue, resulting in open doors for EU and NATO accession.

PM Zaev voiced expectation that the coming EU summit in Sofia would confirm the European perspective of the Western Balkans.