Parliament will vote on the entire prime minister’s team, not just ministers one by one. The Parliament and the government will come and go together, in the second round of presidential elections there will be no turnout census, the public offices remain open for (in) direct contact with the citizens, reporters will be invited to regular briefings, and the head of the state will address the MPs more often – not just the New Year’s address as before.

This is just part of the changes that presidential candidate Gordana Siljanovska-Davkova plans to implement if she gets the support from the voters on May 5. In the programme written on twenty pages, she explains her plans for security, diplomacy, economy, environment, pollution. etc.

VMRO-DPMNE’s presidential candidate announces that, just like the incumbent president, she will keep the right to a suspensive (pocket) veto as a tool for opposing the government’s policies, but insists that this will only be done to improve the quality of the laws. However, the MPs will still have the last say, and she will be able to appeal to the Constitutional Court. When it comes to giving a mandate to form a government, Siljanovska says she will give it to the one who will prove that he has the majority, which makes her different from Ivanov, who refused to give Zaev the opportunity to take Ilinden Street for a long time. She promises that she will foster constructive cooperation with the government, and in cases of evident violation of the law and the Constitution, she will address the Parliament and seek public support.

“I will position myself as a neutral moderator in the relations between the parties, and act impartially in possible diametrically different positions regarding issues of national interest. Taking security protocols into account, I propose reducing of the president’s privileges after the expiration of the term. I will surround myself with a small cabinet of expert and competent people selected at a public competition, with respect to the highest criteria,” Siljanovska added.

In a statement for Nezavisen Vesnik/Independent daily newspaper, the constitutional law professor explains that the fact she would as for reduction of the president’s privileges does not mean that it will apply to former presidents (Branko Crvenkovski, and soon Gjorgje Ivanov) who, according to the law, have the right to a pension and their own office.

“Macedonia is a poor country and cannot afford to support four or five cabinets. I, appropriately, do not plan to be president for more than one term, but during that time, the funds that are planned for me will be used to support the non-governmental sector, for scientific works and other things that will contribute to the promotion of the country” , says Siljanovska for Nezavisen Vesnik/Independent daily newspaper.

Among other things, she will require full professionalization of the diplomatic service and strategic targeting of the countries that matter to us on a different basis: political weight, economic cooperation, diaspora, etc. SIljanovska notes that the diplomatic profession is not a rewarding trip for meritorious party staff, but the face and voice of the country. Professor Siljanovska announces that she will seek to amend the Law on Foreign Affairs, in the part of entering diplomatic service and singling out the Diplomatic Academy as a separate institution, with a director in the ranks of career ambassador. She will dismiss ambassadors who do not do their jobs well. 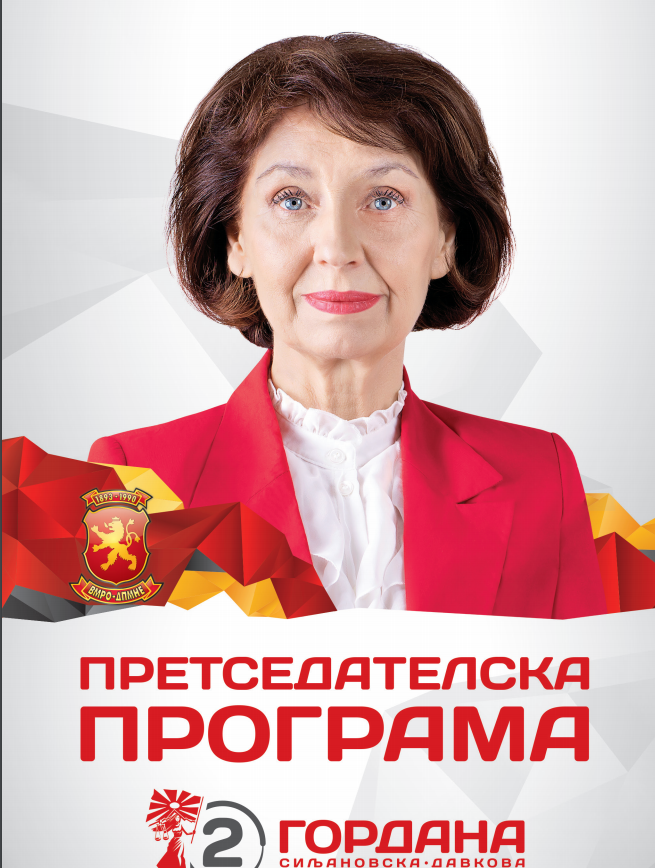 “During my term, I will encourage a debate on amending of the Foreign Affairs Law so that at least two thirds of the total number of diplomats are career diplomats and the rest to be appointed from the ranks of the so-called “political diplomats”. The current legal solution allows the diplomatic network to be dominated by ‘politically appointed diplomats’, Siljanovska says. At the same time, she will require her expert team to be involved in EU accession negotiations so as not to allow monopolization of the process by the government, and to protect the interests of the state, bearing in mind that “this government is unable to deliver quality reforms, and is ready to sacrifice everything that is sacred to the country just to show that there is some progress.”

She promises to treat environmental pollution as a security issue. Therefore, the Security Council will establish a working body for pollution as a security threat, which, if the authorities (local and central) are unable to take any measures against pollution, will propose the adoption of a decision on declaring a state of emergency to the Parliament.

I will not use the adjective North

Gordana Siljanovska-Davkova reiterates that she consideres the name agreement an open issue, although several days ago she said that she would sign the documents with the country’s new name.

“I will set up an expert group composed of top world authorities in international law to check the legal viability of the Prespa Agreement in the light of The Vienna Convention on the Law of Treaties (VCLT). The Macedonian people, with the changes related to the Prespa Agreement, have deprived them of the right to self-determination, which is a jus cogens in the light of international law. Respecting the clearly expressed will of the Macedonian citizens since September 1991, as well as from September 2018, but also as a citizen, I will not personally use the adjective North”, emphasizes the presidential candidate supported by VMRO-DPMNE.

We will promote ourselves through the “Macedonian Salad” platform

“Macedonian Salad” is one of the projects for the preservation of Macedonian culture. It is an online platform that will be dedicated to promoting Macedonia through personal experiences of people in various fields: culture, people, education, entertainment, business, nature and food. The platform will use communication tools to engage the global audience in virtual dialogue, networking, exchange of knowledge and experiences involving Macedonia.