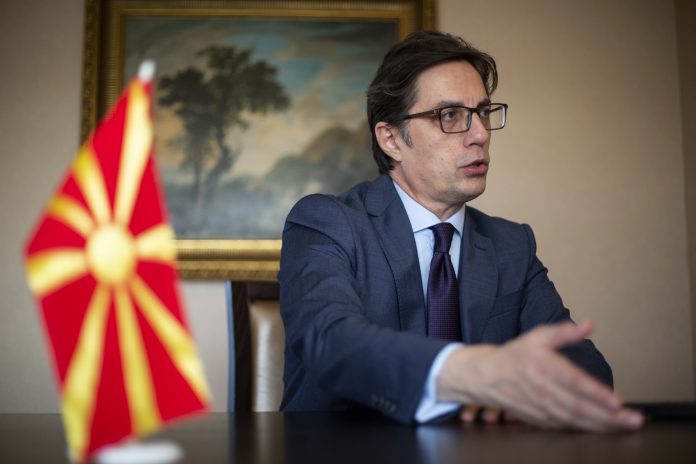 North Macedonia’s President Stevo Pendarovski says that top officials are lobbying until the very last minute to get a date for start of accession negotiations and an acknowledgement for the country’s recent efforts.

EU’s final decision should be announced by Friday afternoon, but even in the case of a negative decision, President Pendarovski says that EU integration is North Macedonia’s only option.

“We’re engaged in last-minute diplomatic efforts because the decision is not finalized yet. The EU leaders’ meeting starts today to last through tomorrow. The enlargement is on the agenda tomorrow around noon, when a formal decision is to be reached,” Pendarovski said.

“At this point,” he continued, “I wouldn’t like to say with certainty that our request to start accession negotiations would be downright rejected because all of us, including PM Zaev, Deputy PM Osmani and FM Dimitrov, as well as myself, are lobbying until the last minute.”

In terms of security, if there’s no positive decision for start of accession negotiations, Pendarovski said there wouldn’t be any drastic changes.

“All institutions guarantee this. North Macedonia’s security is guaranteed. The swift ratification of our full-fledged NATO membership is the biggest confirmation for this, i.e. for sustainable security in the coming period.

“So far, 24 out of 29 NATO member countries ratified NATO’s protocol. A technical delay by Spain could possibly prolong this by a month or so, but we’re definitely to become a full-fledged member to the strongest geopolitical Alliance in world’s history, and thus, we have an additional guarantee that 29 other countries would be here to help us if needed,” Pendarovski said.

The president reiterated that the aim is to get a date for start of EU accession talks as soon as possible, so that we enter a deep reform process assisted by Brussels.

However, Pendarovski pointed out, from the aspect of security and his role of Commander-in-Chief of the Armed Forces, there should be no dilemmas nor doubts as to what would happen if there’s no date for opening EU talks.

“In terms of the strategic direction if we don’t get a date now for start of accession negotiations, I think it’s absolutely clear that the best option is – for us as a country, regardless of government, president, or relevant political parties, to keep making efforts for full EU integration,” Pendarovski said at a ceremony marking the day of Joint Operations Command in Kumanovo.