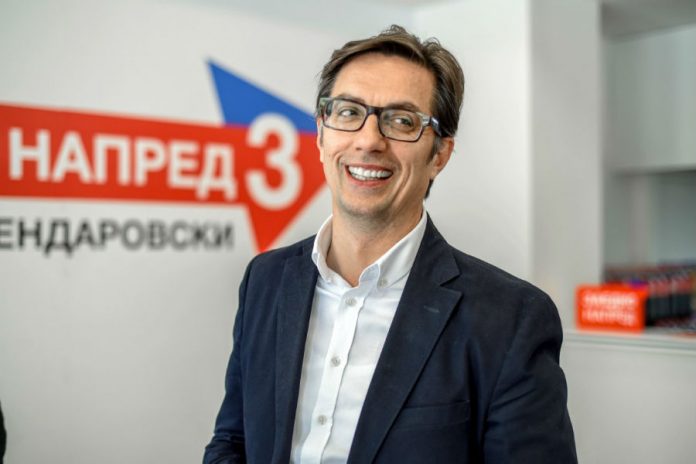 Stevo Pendarovski, the presidential candidate of SDSM and the coalition, is not discouraged by the low turnout and the narrow advantage he scored in the first round of the sixth presidential elections in the country. He is convinced that this outcome will be a motivating factor for the citizens to come out on May 5 in a significantly larger number, so that now he expects a landslide victory. In these elections, he says, we are deciding whether we want to move forward to NATO and the EU or to stop on that road, to review everything we have achieved, and enter into yet another uncertainty.How much of the baggage of SDSM and DUI from the past two years of governance is a burden to you in your presidential campaign, which you entered as a politically neutral person and as a consensual candidate, given that in the first round you had insignificant lead against Gordana Siljanovska-Davkova, as opposed to the expected tens of thousands of votes?

-Of course, dissatisfaction from the rule of SDSM and DUI among some of the citizens had a negative impact on the outcome in the first round. They decided to express their dissatisfaction by staying home and this is their legitimate right. But what is also true is that these same citizens, just seven months ago, in huge numbers supported the referendum. I am convinced that in the second round they will come out in much larger number and confirm their referendum will. These elections are not ordinary, and I’m sure that they are aware of it. In these elections, we choose whether we want to move forward to NATO and the EU or stop on that road, to review everything we have achieved as agreements, and enter a new uncertainty. I am convinced that citizens want progress and they will prove this by massively voting on May 5th.

Do you agree with the analysis that the Prespa Agreement and the Law on the Use of Languages, although pointed out as the most delicate topics, did not contribute much to the fall in the ratings of the ruling party, but that the main reasons should be sought in various “amnesties”, nepotism and certain inadequate staffing policies, and in the failures of local governments?

– I partially agree. However, you must bear in mind that the Prespa Agreement has its influence. You can see that VMRO-DPMNE abuses this topic and manipulates with the citizens’ feelings. The whole campaign in the first round devoted to criticism of the agreement and to false patriotism, while in the second round, when they need the votes of ethnic Albanians, nothing has been said about it. This, of course, had its influence, otherwise they would not have run the campaign in that manner. But the fact is that there is dissatisfaction with the government, and the prime minister and the other authorities accepted it. That is why they sent a clear message about the fundamental changes in the government coalition after the elections, but also changes in the way of governing. I welcome this and I think that it is a right move that as president I will encourage them to achieve it as soon as possible because I do not believe that there will be a second chance.

You have previous experience in presidential elections – both as President of the SEC in 2004, and as an opposition candidate ten years later. From that aspect, what do you expect on May 5 in terms of the chances of achieving the 40 percent turnout?

– I am confident that the required turnout will be achieved. In all the previous presidential elections, a large number of citizens voted in the second round and this will happen again. I believe that those who stayed home and decided to send a message, in the second round will go to the polls because they know how important this is. I expect that all ethnic communities will vote, as I expect that the voters of Mr. Blerim Reka will come out and support me. They voted in the first round for Reka with whom I have practically the same goals, NATO and EU integration and equal treatment and rights of all citizens. I am the only candidate that unites all citizens regardless of their ethnicity, and I have been promoting this sincere commitment for years. This gives me the right to believe in the success of the elections and a landslide victory.

Now that you have the experience of the first round of the sixth presidential elections, which political competition and which opponents seem more difficult to you: in 2014, when you appear to have entered an already lost battle, or now that you entered the election ring as a favorite, and won only about four thousand more votes than VMRO-DPMNE on April 21?

-The crucial difference is that in 2014 we had a regime of power which, through serious forgery and electoral engineering, stole the victory. This was proved many times later and we all heard it in the-called “bombs”. Now we have a new, democratic ambience and I can freely say that the first round elections were one of the most democratic we have ever had. It is certainly easier now, and such elections resemble a candidate country to join the EU. I am not at all worried about the narrow advantage, on the contrary, I think that it created conditions for an even more fierce battle in the second round and the opportunity to achieve the required turnout. As I said, the citizens sent the message in the first round and stayed home. They did not vote for VMRO-DPMNE. Now I believe that they will come out in much larger number and I expect a certain victory.

These are the first presidential elections in which the ruling parties are represented by a consensual candidate. Why was there such a low mobilization of the ethnic Albanian electorate in the first round?

– I do not think that there was a low mobilization among the Albanians. Of course it would have been better if there was greater turnout, but the turnout was low among the Macedonians. So it was not an ethnic trend, but a general one at the level of the entire country. Many of those who did not vote, whom I meet, say they will vote in the second round. They know that there will be no other chance, and they are aware that they need to vote.

What if the elections fail? How will this affect the integration processes and the internal political stability of the country?

-It will reflect badly, and honestly I do not even want to consider such a scenario. It will be an introduction to new political crises, calculations, cross-party quarrels. This will stall the processes towards the EU and this should all be of great concern to us. Citizens should know that unsuccessful elections can lead to new elections that will further complicate the situation. This is the least we need at the moment. We must now use the given opportunity and get a date for negotiations this summer. Towards the end of the year, we will formally join NATO and we will finally start a new chapter of our country’s history. Chapter of stability and rapid economic development. We must not miss this opportunity.

What will be the first three steps that you will take if you get the people’s confidence to stand at the helm of the state on May 5?

Firstly, I will sign all the laws that Ivanov obstructed, but are of interest to the citizens. What Ivanov does is impermissible and I will immediately change it. Secondly, I will immediately form an expert team that will help me in particular in the field of European integrations and foreign policy. I want to give maximum support in these processes that are ahead of us, and help in timely and quality preparations of reforms. This is practically something I will do my entire term, but I will start immediately after taking office. Thirdly, I will develop a national unification strategy around key strategic determinations. For years, we have not had a national strategy on important issues of interest to the citizens. My commitment is to finally change this, and as president I will be the one who will initiate a dialogue among all stakeholders and will unite them in relation to these issues. All serious countries have consensus on some issues, so our country must have it, as well.