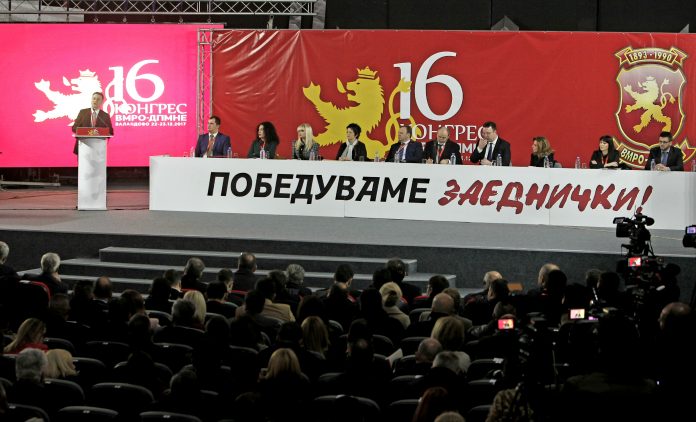 The session to discuss the proposal of The Committee on Rules of Procedure and Mandatory and Immunity Issues to revoke Nikola Gruevski ‘s Parliamentary Mandate, will take place between June 10 and 15, parliament speaker Talat Xhaferi said yesterday. It takes a two-thirds majority, that is, at least 80 lawmakers to raise their hand to strip the mandate of an MP who is  unjustifiably absent from work in parliament for more than six months now. Considering that the government does not have the necessary number, the question of the moral responsibility of the opposition MPs is again brought up, and they received a clear signal from the leadership of VMRO-DPMNE to vote for revoking Gruevski’s mandate, but did follow through on that in the Committee.

Prime Minister Zoran Zaev said yesterday he did not intend to negotiate with MPs to secure the two-thirds, as was the case with the change of the constitutional name, because, as he said, the people’s representatives in this case should act only according to the Constitution and law.

“To me, it’s not only banal, but also ridiculous, to say that Gruevski was not allowed the right to come and apply for a justifiable absence. He can come at any moment. I wish he came and it will probably be for the best if he did come home. This is our goal, so he can apply for justifiable absence. I do not intend to negotiate this issue with MPs in order to get two thirds of them to vote. It is their responsibility and of course their ethical code and morality,” the prime minister said.

On Monday evening, the Central Board of VMRO-DPMNE recommended that MPs vote according to the Constitution and the law, which stipulate that an MP who has been unjustifiably absent for at least six months will have their mandate revoked. But the very next day, the two opposition members of the commission, Johan Tarculovski and Boris Zmejkovski, i.e. their replacement Nevenka Stamenkovska, refused to state their position. Thanks to the required majority, the government with five votes brought Gruevski’s mandate issue to the MPs. A senior party official from VMRO-DPMNE yesterday stressed that the EC’s guidelines are clear, and President Hristijan Mickoski also voted for them. They expect most of the MPs to listen to the recommendations.

“We are a party that advocates absolute respect for the Constitution and the laws so we can not criticize the government that it violates them, but we must show that we are different from them. We can not be silent and turn a blind eye to the apparent political persecution of the government against those who don’t agree with them, but if Gruevski or any other MP has unjustifiably been absent from work for six months, his mandate should be taken away. Voting in the committee was not crucial, the context should be seen, because the session was led by Pavle Bogoevski, who announced his resignation,” our source says.

Regarding the question that if part of the MPs do not obey the EC’s conclusion, the source replies that the party bodies and organs will decide on that. Nikola Gruevski is still perceived as an icon among a large part of the VMRO membership, and the allegations and convictions for crime are considered a political persecution.

“Should I tell you, or it is clear enough that I will vote against the decision to revoke Nikola Gruevski’s parliamentary mandate. I have a few million explanations on that, from humane to political. And can you imagine, a vote will be held to revoke the mandate of the MP who received the most votes in the parliamentary elections, an MP who won in direct contention with the asserted prime minister, and on that decision people voting will be persons who would not even be chosen by their own families for a home council”, said yesterday Ivan Stoilkovic, president of the Democratic Party of Serbs, a coalition partner of VMRO-DPMNE.

MP’s who also said they will be voting against are Emil Dimitriev, and even Emilija Aleksandrova from the independent parliamentary group, who was expelled from VMRO-DPMNE last year for voting on the agreement with Greece.

“We will reach a firm position before the session is scheduled,” said Nola Ismailovska-Starova, one of the eight members of the independent parliamentary group.

If Gruevski’s mandate is not revoked, the law stipulates that he remains a Member of Parliament, but will not take a salary and only contributions will be paid by the end of his mandate. For absence from work, the President of the Assembly may punish a Member of Parliament with five per cent of the salary and that punishment can reach a maximum of 35 per cent. Regarding how to vote for the revoking, Xhaferi replied that he would vote “for”.

We lobbyed the EPP for a favorable report

VMRO-DPMNE welcomes the assessment of the European Commission to give us a date for the start of negotiations with the EU, but they do not believe that this will happen. The main opposition party points out that the report clearly states their constructive role in improving and approving the reform laws, and all key ones, except for the SPO, have passed.

“It’s no secret that we lobbyed about it with our friends from the European People’s Party,” VMRO-DPMNE said.

However, they point out that this report clearly emphasizes the weaknesses, corruption, the situation in the public administration, the economy and the rule of law.

“The report concludes that there is corruption, which is a confirmation of all international reports on Macedonia that rank the country as the most corrupt state in Europe. The report reads: Corruption is predominant in many sectors and the government does not show, and should show that the fight against corruption is a national priority. There is no need for the EU to tell us this, unfortunately we see it all around us. Unfortunately, it is becoming more and more clear that a negotiation date will not be set this June, nor this year”, says Aleksandar Nikolovski, vice president of VMRO-DPMNE.

Mickoski was prevented from coming to the delivery of the report

Party leader Hristijan Mickoski received an invitation to come to the presidential villa in Vodno on Wednesday, where EU ambassador Samuel Zbogar handed over the report to the head of state, Stevo Pendarovski, but was prevented from coming due to urgent obligations.

Earlier, President Stevo Pendarovski announced that he had invited the leader of VMRO-DPMNE to a meeting, for which he was also busy these days, although he did not refuse the invitation in general.