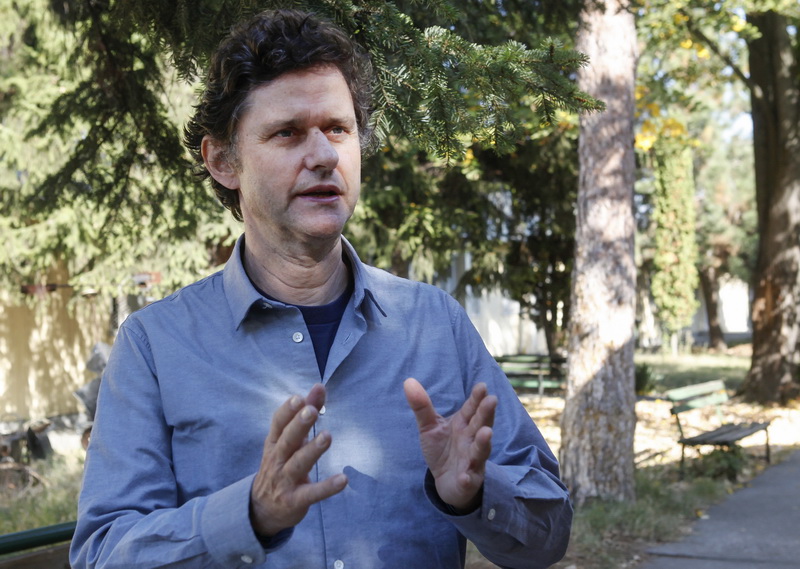 Imagination is one of the key techniques for the actor, especially today, when we are taught in all parts of the world not to use it. At a time when the media is giving us a cultural fast food, we must reconnect. This is stated by the award-winning German actor, director and lecturer Ulrich Mayer-Horsch, who worked for several days in the Kino Kultura (Teatarot na  Navigatorot Cvetko) and he introduced the Macedonian actors with the  technique of Michael Chekhov. The acting techniques developed by Michael Chekhov, the grandson of Anton Chekhov, consist of the imagination and sensitivity of the actor’s body, and one of the main tools of his method is the psychological gesture. The German lecturer Horsch is a graduate theater pedagogue, theologian and philosopher from the universities of Heidelberg, Hamburg, Kiel and London (Royal College). He has been active in the theater scene for about 30 years and has shared his experience with numerous actors in Europe, Russia, Armenia, the Middle East, Brazil, Uruguay, the United States, Japan, Singapore and Taiwan. He also teaches at Yeditepe University in Istanbul, and from January 2020 he will assume the position as an artistic director  of the Hamburg School of Theater. He is a co-founder of Michael Chekhov- Europe and a member of the International Teaching Council of the Michael ChekhovAssociation in New York. He upgraded his education with former students to Michael Chekhov such as Hurd Hatfield, Mala Powers and Joanna Merlin. In a conversation with “Nezavisen”, Horsch says that although actors around the world have different backgrounds in education and practice, they still share a common problem or challenge. 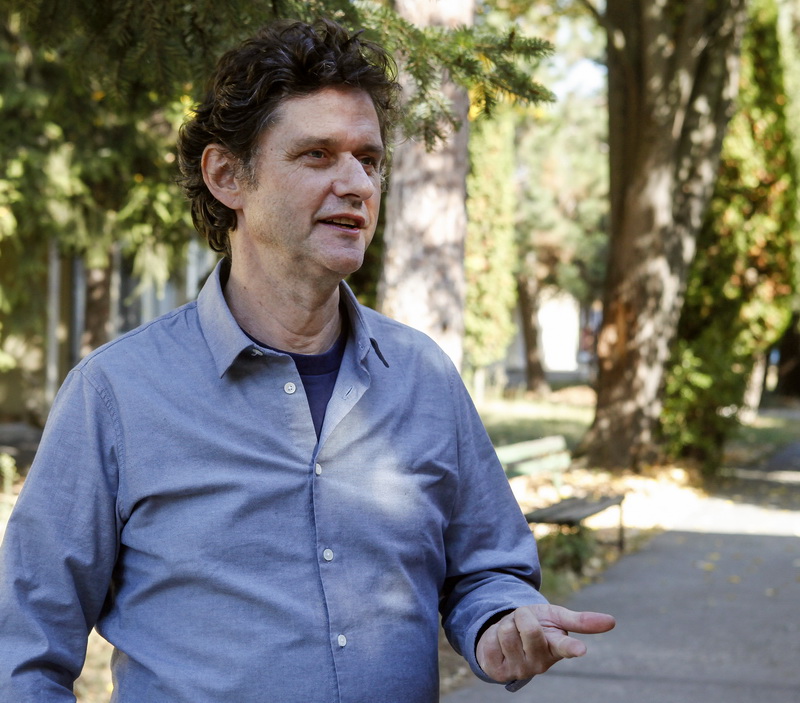 N: What is the first thing that you usually teach young actors to?

What we do at the Hamburg Theater School is that we treat the actors as artists, from the very first day. We do not treat them as students. Because if you treat someone as a student, he will always remain a student and behave that way. But by treating them as artists, then they will better understand what it means to be an artist with artistic freedom. And to achieve the  artistic freedom, then, one has to learn the skills. In the 20th century there were about 25 basic acting techniques, and in the 21st century there are a dozen techniques that are really valuable, but the actors cannot compete on how many techniques they know. If you are a good actor, just mastering one technique opens up another. If you are well trained in Stanislavsky’s techniques, you will have to be open to other techniques. We are artists and we must constantly work to spread the challenges of mind and body. Anne Bogart believes that actors need to possess three things – passion, technique, but also to say something – to send a message. If you do not have the passion, why you would go on stage or why you would start something, if you do not have the technique, you have the passion in vain and you don’t know how to send a message. If you have nothing to say, technique will not help you, passion will not help you. But, I really think the 21st-century artists do have something to say.

N: What are the most important skills according to Michael Chekhov that every actor needs to achieve?

Michael Chekhov said that actors love their profession, they love the audience, they love the show, they want to be on stage, they love the character they interpret. It’s all love. As actors we have to connect with it, otherwise everything we do on stage will be shallow. Every actor should know about Chekhov’s psychological gesture. It is actually a psychophysical movement. Stanislavsky defined the entirety of the characters in the play, but Chekhov says it must be physically realized. First, physical fitness is very important, the body needs to be constantly trained. The second thing is the imagination, but not only to have it but to deepen it. Here in Skopje we mainly worked on the imagination, on what we hear, see, taste, imagine, and smell. Imagination is greater than memory, greater than life, and through the imagination Chekhov makes the actors greater than they are. If I use my imagination and play Hamlet, it will always be different. If I only use my personal experience, I will bring Hamlet down to my personal level. But if I use my imagination, it is likely that Hamlet will take me to his level. Well, that’s what Chekhov is looking for. If you think of the person you love or want, your inner body reaches him or her and touches him or her, even though we are sitting here physically. We are always driven by our imaginations, images, visions, hopes, potentials. The third important thing about Chekhov is the atmosphere. Every place has an atmosphere, and this bar has an atmosphere, but we as actors can transform it, we can make it exciting or sad, cold or warm. Chekhov says the atmosphere is the soul of the performance. I’ve seen very good performances, good techniques, good acting, actors with good intentions but I was bored. Why? Because there was no atmosphere. We want to be touched, to be moved when a show or performance is over. It is the atmosphere that unites artists and audiences. 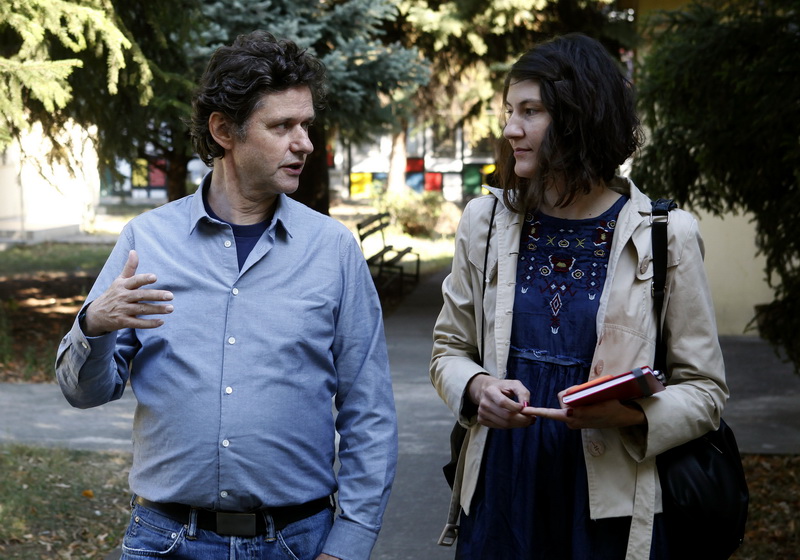 N: In your articles about theater and acting you often refer back to what actors need to learn is to listen to each other while on stage…

It is very important. This is Chekhov’s most basic technique. Not just for the actors but for the people in general, to learn to listen to each other. One of the most important things in the 21st century is to learn what it means to lead a dialogue. It is giving and receiving, and there is no giving without receiving and there is no receiving without giving. Therefore, you must listen before you react, whether it concerns your partner on stage or in privacy. Chekhov also refers to individuality, which he says will not be lost when you work in an ensemble. You get more expression, you become more interesting if you are surrounded by people. And this doesn’t just apply to theater. If you have family, friends and give up your ego, you become bigger, not smaller.

N: What are the challenges of the theater or the contemporary theater?
It’s hard to say a contemporary theater, but there’s a European theater, there’s an American theater, there’s a South American, Japanese theater … But the question is correct because they all have something in common. We need to learn some things in the theater again. We have already talked about the imagination and now I will say in another context why it is important again. Because all over the world, people tell us not to use our imagination. We see pictures in the media, but these are not our pictures, it’s like fast food. We are taught cultural fast food, and we need to learn to reconnect again. The second thing is empathy, not so typical for Chekhov, but it is taught everywhere. But not only as artists, we need to be able to see the world through the eyes of others. If we succeed, we may understand why someone behaves the way they do. Politics in the world says either you are with me or you are against me. Either you are my friend or my enemy. In theater we do the opposite, we try to understand the “enemy”. We are trying to understand why Richard III, the mass murderer, behaves this way. We do not take sides here, but through empathy we understand Romeo and Juliet equally. And that is really important in today’s political discourse. We have forgotten the empathy. 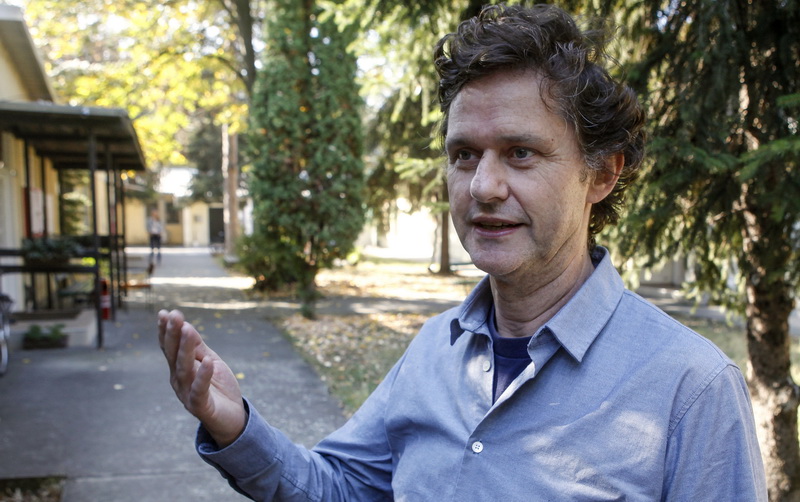 N: You have been in Skopje for several days, we met with some of the Macedonian actors, mostly the younger ones. What is your piece of advice for them?

Macedonian actors have to learn the same thing that the German or French actors should learn as well. The basis is to learn how to learn. I notice one behavior, generally in all actors. If they have finished college of four years, they think they know everything. That is wrong, the actor is constantly learning. A few years ago we did a cabaret show in Germany. Although this is not our genre, we decided to do it. We offered the lead role to one of the best actors, an adult, whom we considered to be the most appropriate. He told us: “But how can I do this? I’ve never played something like that. Let me think. ” A few days later he called and said – I accept. He explained that he accepts the challenge precisely because it is new to him. This is the kind of attitude  every actor should have. They need to be curious and try out new unknown things in the theater.