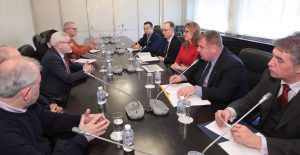 Following its fourth meeting, the Bulgarian-North Macedonian commission on issues in history and education has proposed that the two countries jointly honour the historical figures Tsar Samuil, St Clement of Ohrid and St Naum of Ohrid.

This was said in a Bulgarian Foreign Ministry statement after minister Ekaterina Zaharieva held a meeting with the commission, to be briefed on the outcome of their meeting.

The commission was set up following the good-neighbourliness treaty between Bulgaria and North Macedonia. The commission held its first meeting in July 2018.

The Foreign Ministry statement said that Zaharieva thanked the commission for its achievements so far and emphasised its important role in the interpretation of the shared history of the two countries.