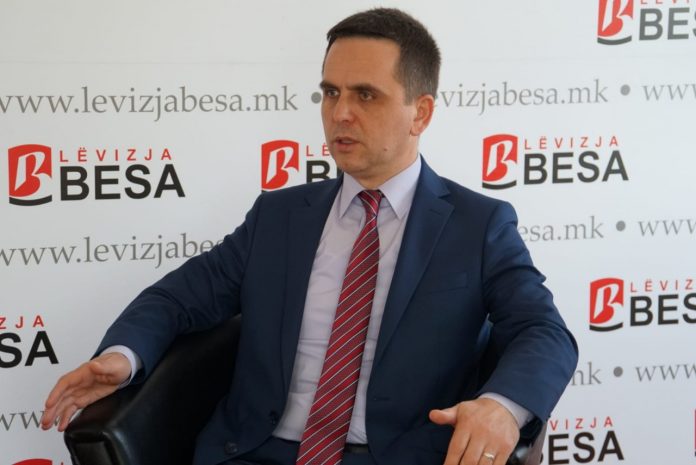 We didn’t support Stevo Pendarovski in the second election round, instead our goal was to have a successful process so that we can move the country forward. The mood among the Albanian voters was on the side of the opposition, so DUI’s position was completely delegitimized. It is still too early to say whether at the next parliamentary elections we will compete in coalition with the Alliance for Albanians. We plan to promote our vision door-to-door. After the elections, we expect to be part of the new government, says Bilal Kasami, president of Besa in an interview with Nezavisen Vesnik/Independent daily newspaper.

Mr. Kasami, the presidential elections in which the candidate of the government Stevo Pendarovski won, are behind us. The impression was that his victory was more pronounced in the second round, not only because of the mobilization of SDSM and DUI membership, but also because the supporters of Blerim Reka voted for Pendarovski, that is, the supporters of your party Besa and the Alliance for Albanians.

– Our call for mass turnout and voting according to our voters’ personal conviction was a sign that we wanted it to turn out as it turned out in the end, for the process to be successful and normal, expectations were in that direction and the newly elected president will be inclusive in his attitude and position as it is appropriate for a head of a state.

Although you and Zijadin Sela have ordered everyone to act according to their will, it was surprising that Reka’s call was to come out and vote I large numbers for the European option, which, according to many, was pointing to Pendarovski. Was there a misunderstanding among the parties that supported Reka and Reka himself?

– Our call was absolutely principled in line with our long-term political positions, and I can say with confidence that we are the only party with consistent political views. Our call was by no means think of boycotting the process, knowing the consequences, but also knowing the attitudes of certain political parties that, although they tried to show themselves as actively working on the field, however, prayed for the process to fail, so they can blame the Albanian opposition in the end and extend their intra-party agendas. That is why our position, which is shared with the Alliance of Albanians and Professor Reka, was each to send their message separately on the basis of the decisions and the positions they represent.

In the first round, your candidate won 80,000 votes, but how many of these votes are thanks to Reka’s qualities, and how many because of the support given by Albanian opposition parties? Is DUI’s position stronger now, or less stable?

– From the moment we decided on what kind of candidate we want to represent our party in the presidential elections, the quality of the candidate was a priority for us, and I think that a better option than Professor Reka could not be found in these circumstances. In this context, it was a facilitating factor in the mobilization of the voting body for us, and certainly for the Alliance for Albanians, as well. The message is clear: Albanian opposition has long been a majority in opposed to the DUI votes and the smaller satellites around them. I think that, after the presidential elections, DUI’s position has not only been shattered, but completely delegitimized.

In this context, why, despite all the scandals and allegations of bad management, Ali Ahmeti’s party continues to be a part, as well as an important factor, in any government?

– We have said several times, not only in this government, but also in the previous regime: DUI is the only common option desired by any Macedonian political party, whether it is VMRO-DPMNE or SDSM. Surely, the reasons why this is so are great, because if you look in the past and now, the only officials that have no detailed procedures for crime and corruption against them are DUI officials. So, who is covering up and who keeps things hidden in their drawers, is a question that should be posed to the Macedonian political parties.

After the disagreements with Afrim Gashi, what is the current strength of Besa?

The presidential elections proved a very clear picture that Besa was not only not damaged by the careerists who became famous through the Besa logo, and later sold themselves cheaply to the government, but on the contrary, Besa managed to get out much stronger in this process and surely this will reflect positively in the next parliamentary elections.

The presidential elections were the first where you competed together with the Alliance of Albanians. Does that mean that you will also co-operate in the upcoming parliamentary elections next year?

-What is now important is to articulate the political concept and expectations of the citizens. We are preparing for a door-to-door campaign where we will convince the citizens that we are the best option that should be given the opportunity for government. As for how we would compete in the next elections, I think that it is still too early to say, and to know from this time perspective how things will unfold. The political scene is very dynamic, many things are changing, so what is most important for us is to hold consistent political views that are already recognizable for our party.

You criticize the work of the government, even if you support it in processes that are important for the European future. On the other hand, despite the conciliatory tones, there seems to be no climate for a coalition with VMRO-DPMNE. Where do you see yourself after the end of the parliamentary elections?

-We will continue to criticize the government because we are an opposition political party. It is not true that we support the government for the processes for the European future, but we have a common position with other political actors who are uncompromising for NATO and the EU – the option as the only perspective of the country, because it is in the best interest of all citizens and the country. So, we offer our support to our common future as a country, and that is not only a commitment of the government. As for the outcome in the next parliamentary elections, we expect to be winners, or in a wider option of winners of the Albanian electoral body and, of course, be part of a government where we can clearly and accurately implement our program commitments, as well as fulfill the expectations of the citizens.