Recently dismissed VMRO-DPMNE vice-president, Mitko Jancev, calmly received the decision on his dismissal from office. He says he is waiting for an official document from the party to see if he is “only” dismissed from his vice presidential post, or was ‘kicked out” of his party membership.

“If I am still a member of the party, I will certainly stay to fight for my ideas of progressiveness and Euro-Atlantic orientation,” says Jancev for Nezavisen Vesnik/Independent Newspaper.

The strained relations with President Hristijan Mickoski, which resulted in yesterday’s dismissal, culminated in the pre-post-referendum period when Jancev openly advocated that he would go out and vote “against” the agreement with Greece, which according to him was bad, but the party should publicly show a stance to help Macedonia finally become part of the European family. On the other hand, Mickoski and the other two vice-presidents: Aleksandar Nikoloski and Vlado Misajlovski declared a “boycott”, although they publicly advocated the option of everyone deciding according to their own belief.

In fact, the first sparks on the VMRO campus towards the Mayor of Kavadarci was a summer photo of a seemingly insignificant event in the Tikves region where Jancev posed together with Prime Minister Zoran Zaev. While Social Democracy saw this moment as a photo of two leaders for European Macedonia, VMRO-DPMNE felt betrayed that the opposition party even took action on the social media and launched a campaign to boycott the Kozuvcanka bottled mineral water, whose owner is Jancev. Immediately after the referendum, however, he was the first to extend his hand to Zaev’s idea of ​​amnesty and reconciliation for the events on April 27th.

“The talks about my closeness or for alleged businesses with Zaev are fabrications. I would be happy when my party VMRO-DPMNE and SDSM have people in the leadership positions that think of Macedonia’s wellbeing. As for the business I run, everyone has his limits and tolerances, it has nothing to do with politics,” commented Jancev.

When he won the election for the mayor of Kavadarci 11 months ago, many predicted a bright future for him in the party. His fellow party members spoke highly of him, saying that he became a mayor exclusively because of his abilities, and not because of the power of the party machinery, which was completely jammed in the last days of the rule of Nikola Gruevski. After all, Jancev was the only VMRO mayor in all of the cities in the country. The other three are in the municipalities of Zrnovci, Ilinden and Sopiste. Shortly afterwards, with the appointment of Mickoski as a new president, he was given a chance to watch his back. He accepted. In one of his first interviews with our newspaper, he emphasized that VMRO-DPMNE’s policy, political ideas and commitments were closest to his convictions. According to him, that party knows how to get closer to the people, to emotionally experience problems and to approach them transparently and honestly. He said that the post in VMRO-DPMNE was a big challenge because he wanted to help the process for a prosperous and more democratic Macedonia. 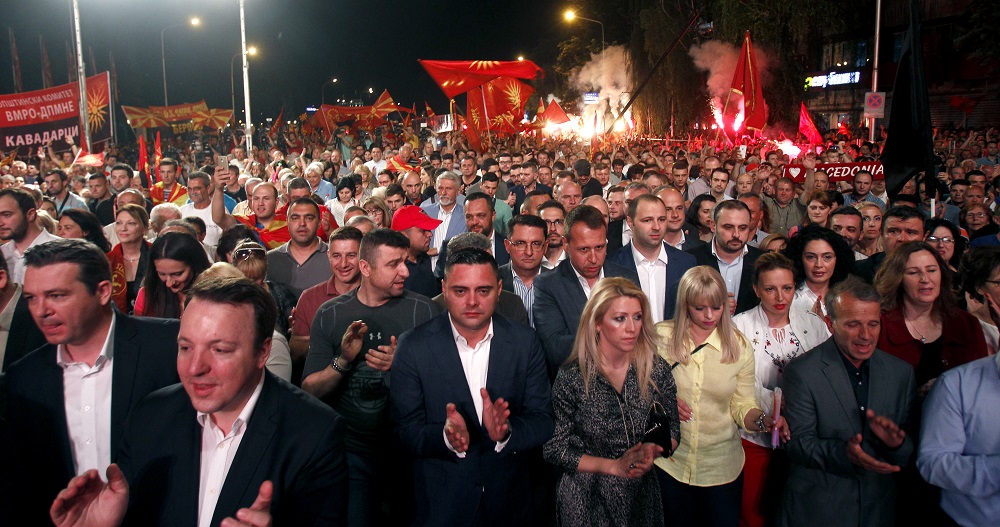 Nine months later, we ask what ruined his relations with Mickoski.

“From an economic point of view, I still have no problems with the ideas that the party advocates. But, I do have a problem with the vanity of certain people. VMRO-DPMNE cannot and must not be a sultan-party. There should be respect for different stances, because with only one stance and dictatorship we have reached the point where we are,” the mayor of Kavadarci pointed out.

Some media speculated that he was preparing a “coup” against Mickoski in order to take over the party. On the other hand, the party was preparing a dismissal in the VMRO ranks. A few days ago, Jancev asked “who is the man who will be brave enough to dismiss him?” He was unanimously voted out by secret ballot of the Central Committee on Monday, to which he did not attend.

“I will not answer directly to the question of whether I have ambitions to become the president of VMRO-DPMNE. It would not be fair, but I will tell you that if there is a team inside the party that is ready to work, a team made up of highly established people with a clear vision of the direction and situation for the party to move forward, I am ready to join this team, to guide it and be its leader,” Jancev announced.

The party explained his dismissal from the post due to his acting against the interests of VMRO-DPMNE and Macedonia, because of his strong cooperation with Zoran Zaev, as well as organizing a group for pressures, blackmail, threats and bribery of opposition MPs to vote on constitutional changes, using the lowest of methods.

“Vice President Aleksandar Nikoloski, who said these things, sent me a text message, and then he phoned me to apologize for the ill-prepared media statement. He confirmed that I am dismissed only because of the different policies with the top of the party,” concluded Mitko Jancev in an interview with Nezavisen Vesnik.

To the conclusion that VMRO-DPMNE remained without an important financier, he reiterates that business and politics have nothing in common, explaining that he helps wherever he thinks is necessary, and where democracy needs to be promoted.