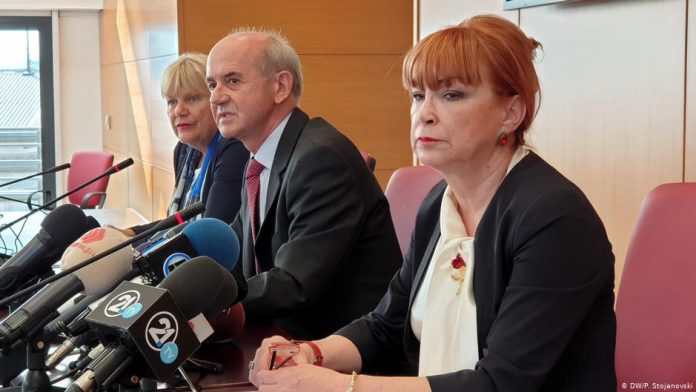 The law on State Prosecutor’s Office proposed by Prime Minister Zoran Zaev on Friday is entering parliamentary procedure today. The Government will try to provide the necessary two-thirds majority to push through the changes that will make the SPO part of the newly established Prosecutor’s Office against Organized Crime and High Corruption with jurisdiction over the entire territory of the country and guarantees of independent action corresponding to the current position, and yet is in the hierarchy and subordination of the Public Prosecutor’s Office. To this end, a compromise is first required with VMRO-DPMNE, from which they say they only agree to the SPO becoming part of the regular Prosecutor’s Office, while Vilma Ruskovska’s election as the new head of the department, her enormous power envisaged by the law, as well as the possibility to continue the investigations of the SPO opened after the legal deadline of June 30, 2017, are absolutely unacceptable.
Although yesterday SDSM declaratively called yet again on political rivals to support the text of the law, however, the ruling structures began to send the first signals that they were ready to sacrifice Ruskovska, and, in return, get the necessary votes from VMRO-DPMNE. MP Artan Grubi, who is considered to be the right-hand man of the DUI party leader Ali Ahmeti, says that it is neither the Parliament’s, nor the Government’s job to decide who should be the head of the new Prosecutor’s Office against Organized Crime and High Corruption that is supposed to replace the SPO, but the job of the Council of Prosecutors.
“Political parties should not go into staffing decisions for a new head prosecutor. They did it four years ago, we see now what has come out of it”, Grubi added. According to DUI, the new draft law is a good basis for a compromise that needs to be achieved through parliamentary debate.

“We stand firmly on our position not to vote on the proposed solution and not have any law in the circumstances when the deadlines of the old law are expiring, or vote for a solution that pardons criminals because the wiretapped conversations will not be no longer considered as evidence. We will intervene with amendments in at least three parts of the draft law, and whether we will vote largely depends whether these amendments are accepted or not”, said Alliance leader Zijadin Sela.
The Besa party officials say they will not support Zaev’s legal solution if it does not undergo significant changes.

“This new proposal will bury the SPO. For us it is unacceptable that there will be no new cases based on the wiretaps the SPO holds. If this is not changed, we will not vote for the proposal, officials from BESA told Nezavisen Veesnik/Independent Daily.
Euro Ambassador to Skopje Samuel Zbogar says he is trying to see the “Racket” case in a positive light and believes that the Public Prosecutor’s Office shows that it is fighting corruption. He emphasized adding it was evident that country has been establishing a practice to fight against high-level crime.

According to Zbogar, there are no reasons for political crisis in the country. ‘The institutions are functioning, the Public Prosecutor’s Office is functioning as is the Special Public Prosecution. We’ve taken note of Katica Janeva’s resignation, but the SPO will continue to function until September 15. Until then, the political leaders have enough time to consider ways to make sure the SPO resumes its work. One of the options is the SPO to be integrated into the Public Prosecutor’s Office. There’s time to solve it,” Zbogar said yesterday in Novaci during his working visit for meeting with local self-government officials.
If a swift agreement is reached, it is possible for the law to be passed by the first of August when MPs go on holiday. There is a possibility for the government to put the draft law to vote even without an agreement reached, in order to see who is in favor, and who is against the future of the SPO. However, it would be most reasonable to leave room by the end of August to find a compromise solution and to vote after the return of the MPs from their vacation. The law on State Prosecutor’s Office is important for the country’s European integration, but above all, for the citizens themselves.

Justice Minister Renata Trenevska-Deskoska rejects to answer decisively when asked whether the government is ready to negotiate for Ruskovska.
“VMRO-DPMNE’s amendments that were submitted to the previous text suggested that the SPO enters the Public Prosecutor’s Office against Organized Crime and there was no proposal for the termination of Ruskovska’s mandate. We only accepted their proposal”, Justice Minister Deskoska told Nezavisen Vesnik.