дома Macedonia Special prosecutors are leaving, but will still handle the SPO cases 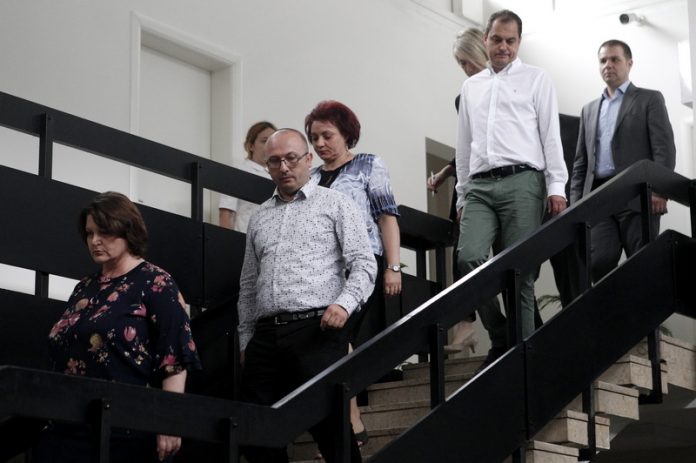 Today, the Council of Public Prosecutors will discuss the status of prosecutors from the Special Public Prosecutor’s Office. Following the dismissal of the SPO head Katica Janeva, it is expected to be formally concluded that the special prosecution’s term is also over. By law, the term of prosecutors cannot exceed the term of the head special public prosecutor.
Ten prosecutors will then return to their previous prosecution offices where they worked before joining the SPO team four years ago. Most of them come from the Skopje Prosecutor’s Office: Lenche Ristoska, Fatime Fetai, Trajche Pelivanov, Artan Ajro and Gavril Bubevski. Lile Stefanova will go to the Prosecutor’s Office for Organized Crime, Burim Rustemi goes back to Kumanovo, Ljubomir Lape to Kriva Palanka, Elizabeta Josifovska to Gostivar and Stevco Donchev to the prosecution office in Kochani.
However, it has not yet been determined whether they will continue to work on the cases they opened in the SPO, which are now in the hands of the regular Prosecutor’s Office, as well as the status of the remaining 80 employees in the special prosecutor’s office. According to the latest information, some investigators are considering returning to their previous jobs at the Ministry of Interior, the Public Revenue Office or the Financial Police, and some plan to continue working in the Public Prosecutor’s Office. The fate of the other employees is uncertain, especially those who had a contract of deed valid until the expiration of the SPO’s term. They were paid for their work in August. After Janeva’s detention, the order was signed by Deputy Elizabeta Josifovska.
An additional problem is that under the SPO law, prosecutors, when returning to their previous jobs, should receive “comparable pay”, that is, their salary to be as high as the one they received so far. But it is clear that the monthly allowance in the SPO is higher than in the ordinary prosecution offices, so these matters will also be dealt with. MP Antonio Miloshoski, who is part of the VMRO-DPMNE negotiating team for the prosecution law, claimed yesterday that the SPO prosecutors’ salaries and bonuses combined exceeded 3,000 euros.

Sources from the Public Prosecutor’s Office inform that after taking over the cases from the SPO, the prosecutors who have led them so far will continue to work on them.
“As soon as the SPO prosecutors are returned to their previous prosecution offices, they get the status of prosecutors. They now had the status of deputies. Whatever prosecution offices they are in, they can all work on the cases that they have been handling in the SPO. We will go case by case. We will give preference to court cases so that there are no delays in trials. We are heading for prosecutors to continue handling their cases. Prosecutors will pick up the cases where they left off. Even if there is a new prosecutor handling a case, it does not mean that the process starts from the beginning. This is done only when the Judicial Council is replaced”, explained sources from the Prosecutor’s Office.
The council called a special session on Saturday evening to accept the dismissal after Parliament earlier in the day had voted unanimously to dismiss Janeva.
Following the special session, Council Chairman Aco Kolevski told the press Janeva was unanimously dismissed for “illegal, unprofessional, and unethical conduct” and her dismissal was effective immediately.
Asked about the fate of her associates, Kolevski said council members were expecting Parliament to draft a proposal in line with the current Law on the SPO.
The procedure for Janeva’s dismissal started when the parliamentary Committee on Election and Appointment Issues at a closed session on September 5 passed a proposal for Parliament to dismiss her based on the Council of Public Prosecutors’ report saying she had acted against the law and the standards of her profession. “We will conclude this with a decision on Monday. The position of the Council is that there are no conditions for the appointment of an acting Special Prosecutor in the light of the WCO Law itself which states that the proposal to appoint a Special Public Prosecutor is made by the Assembly. We are expecting a proposal from the Parliament and if it is submitted we will act on the proposal, as the law is still important”, Kolevski pointed out.
The process of dismissing the detained prosecutor began on September 5, when the Election and Appointments Commission behind closed doors unanimously and without debate reached the conclusion to propose to Parliament to dismiss Janeva. The decision was made on the basis of a report by the Council of Public Prosecutors dismissing Janeva for illegal, unprofessional, and unethical conduct.
The lawmakers decided on Janeva’s dismissal with 102 votes in favor, with no abstentions or against, as well as 27 votes for non-majority communities. The parties were unique in their stance on Janeva’s dismissal, but lawmakers from the VMRO-DPMNE and SDSM reiterated their different positions and views on what the public prosecution should be, in which the SPO should be incorporated. They blamed each other for legal chaos, the protection of crime, abuses of the justice system, the collapse of the SPO cases and their stopping.
Janeva’s term was ending on September 15, even without the dismissal decision. She had resigned on July 15, immediately after the Racket scandal broke and the case’s main suspects Bojan Jovanovski and Zoran Mileski were arrested. She was later detained, as well. While in the Shutka Prison, she demanded the transfer of the SPO cases to the Public Prosecutor’s Office, which was immediately accepted. All cases, wiretapped conversations, transcripts remain in the SPO building and will be kept under a special security regime. They will be picked up from there as needed for trials.