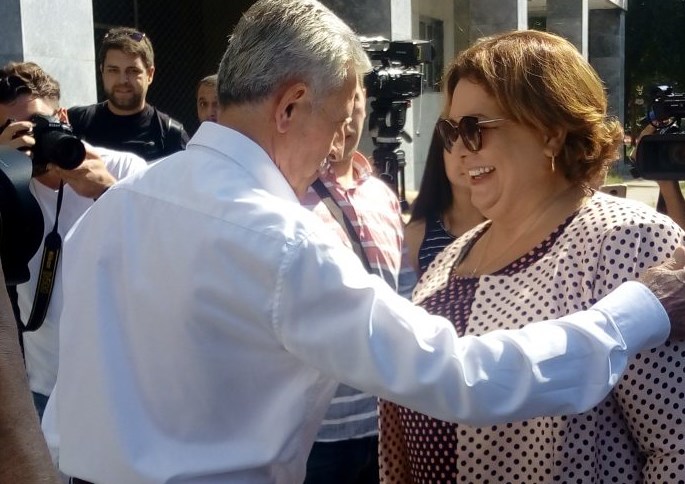 Special Public Prosecutor Katica Janeva came in and out of the office of Prosecutor Vilma Ruskovska, the head prosecutor for organized crime and corruption, after being questioned for more than four hours as a witness. Dozens of news crews waited for her to answer the numerous questions raised after the “Racket“ affair and footage published in an Italian newspaper showing Janeva’s (until recently) close friend Bojan Jovanovski – Boki 13 and a suspect in one of the SPO investigations arranging the release of businessman Orce Kamchev for one million euros. In these recordings, Janeva’s voice can be heard telling Kamchev that “everything will be okay”. After these recordings and numerous speculations that Janeva will come out as a suspect from the Prosecutor’s Office, she said she remains a special prosecutor and testified as a witness. In a statement after the recordings were released, she indirectly confirmed that their voice was hers and said that a prosecutor was always a prosecutor, even when talking to Orce Kamchev. Yesterday Janeva told reporters she could not say whether the voice on the recording was hers, but said that more information will be available at the trial of the case.
“You have to be patient, I cannot say anything else because there is an ongoing investigation. You ought to know that one is not supposed to share information during an investigation. I hope there’s a trial, I hope you will be there, you’ll be seeing more of me,” Janeva said.
The Special Prosecutor does not feel any guilt, but she does not know how the investigation will proceed as another prosecution and another prosecutor are handling the case. Asked why she ordered the suspects to settle on the “Empire” and “Postal bank” cases, pay the damage to the state and not go to jail, Janeva smiled and briefly said, “There is time, this too will be explained”. She says she does not know if any politicians are involved in the affair, or whether someone from the ruling party took a piece of Kamchev’s millions. Although the prosecution said that the second phone, the one that Janeva initially claimed was lost, was formatted and had nothing in it, Janeva said her two phones were being analyzed and that neither of her phones had been formatted, but there was a third phone that was lost.
However, the Special Prosecutor does not know where the first suspect in the “Empire” case is, who was issued a temporary passport on her order to go out of the country and participate in a director’s board and to continue his education, but says he remains a suspect in this case. Two reporters’ questions were asked simultaneously to which she answered “yes”. One was whether Kamchev remained a suspect in the “Empire” case, a response that coincided with the question “do you know where the money is”. The answer was probably not about the money.
Janeva arrived at the Prosecutor’s Office for organized crime and corruption a few minutes after ten o’clock in the morning in an official vehicle owned by Special Prosecutor’s Office. She got out of the car wearing her sunglasses, while reporters waited for her there with dozens of microphones. Janeva, ready for interest from the media, after the first reporter’s question “How did you get to here, after being the greatest hope for justice”, stood in front of the cameras and made a brief statement but did not answer any of the questions.
“I am still a special public prosecutor. My colleagues have full authority to represent cases in court. I hope to have more resolutions this autumn. I hope that with my arguments and my statement I will speed up the investigation,” briefly said Janeva and entered the Prosecutor’s Office.
Lawyer Stevan Pavleski, who came in before her, was waiting for her at the door. They warmly greeted each other and both went  to the office of the head of the prosecution for organized crime and corruption, Vilma Ruskovska. Of all the witnesses who have been summoned to the Prosecutor’s Office so far, including prosecutors Elizabeta Josifovska and Lile Stefanova, only Janeva came with a lawyer. Although legal theories say that if Janeva comes in for questioning with a lawyer she either is a suspect or a plaintiff, the prosecutor’s office says Janeva as a witness has the right to be examined by a lawyer.
“It is not against the law, I can be accompanied by a lawyer. I always have legal consultants with me,” Janeva said.
But this drew the attention of the media as Pavleski was the  lawyer for one of the suspects in the “Empire” case, the case that started Janeva’s downfall. Pandelevski’s name was also mentioned in a statement by Prosecutor Lile Stefanova, who leads the “Empire” case. In this statement, Stefanova claims that although she disagreed, Janeva agreed to issue a temporary passport to Pandelevski.
Janeva’s hearing comes more than a month after the arrests of Bojan Jovanovski and Zoran Mileski-Kicheec, who are currently the only suspects in the “Racket” affair. The same day Janeva handed her resignation, and after it was clear she was involved, the special prosecutor went on sick leave. One of her phones was seized and the other, according to information from the Prosecutor’s Office, was lost and was then found, but all data was deleted. One week after her resignation and sick leave, Janeva held a press conference and said she had been abused, and Boki 13, with whom she was often photographed, turned into the person known as Bojan Jovanovski. After the footage was released, she only addressed the public through press releases.