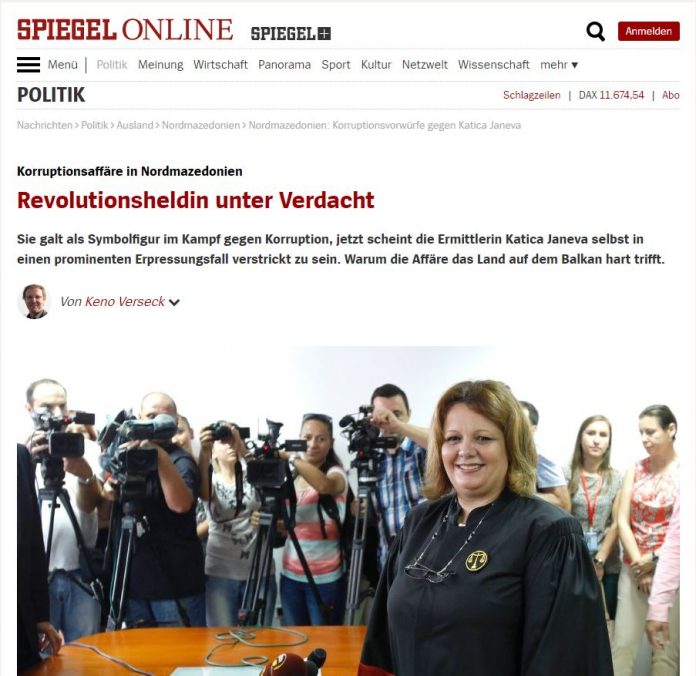 Katica Janeva was considered incorruptible, and right in front of the SPO building, in T-shirts with the three prosecutors – Janeva, Fetai and Ristovska, the “Colorful Revolutionaries” began their protests, trying to overthrow the nationalist-authoritarian regime of Nikola Gruevski, writes the German newspaper SPIEGEL. But with the Racket affair, this myth of the heroic SPO has collapsed, the newspaper notes.

SPIEGEL’s article talks about public disappointment, including footage released by La Verita, though there is still no clear evidence of the special prosecutor’s involvement. SPIEGEL also calls the government, of which the paper says it has been unresponsive to the “Racket” case. Prime Minister Zoran Zaev is also called upon, who, according to the newspaper, “makes an impression as if he himself is hiding something”.

According to the newspaper, the affair has hit the country in a very delicate and vulnerable moment – waiting for a start date for negotiations with the European Union, a date that was partially delayed due to France, the Netherlands and Germany’s reservations over insufficient progress in judicial reform and the fight against corruption. The case of “Racket” seems to confirm these reservations, the newspaper concludes.

According to SPIEGEL, Jordan Kamchev is a symbol of corruption and organized crime. In the article, the tycoon is described as a corporate conglomerate in the finance, media, energy and construction sectors, and at the same time a person of corruption and organized crime. Kamchev, as Der Spiegel writes, acquired much of his wealth during the reign of former Prime Minister Nikola Gruevski from whom he received “millions of orders in millions”. His main partner, it is said in the article, is “the frightening head of the counter-intelligence service Sasho Mijalkov, director of the Gruevski regime”.

SPIEGEL writes that the two businessmen were under house arrest and released on bail by the decision of Special Prosecutor Katica Janeva, who took advantage of their financial power. Confirmation of this is the video and audio recordings of Janeva saying “everything will be okay”. It is unclear for the German daily paper how these footage reached the Italian newspaper La Verita, which is linked to Italian Interior Minister Matteo Salvini, and what they have gained from publishing these compromising materials.