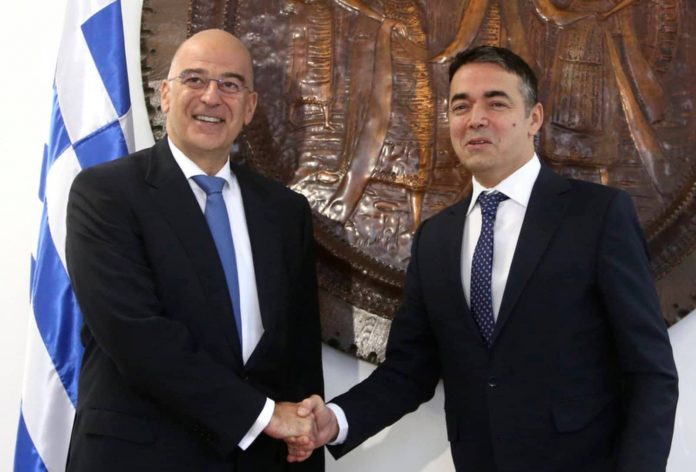 “I am happy to be paying my first visit to neighboring North Macedonia, which is soon to become Greece’s NATO partner and EU hopeful. I am sure accession talks will open soon. You have Greece’s full support,” Dendias said.

He underlined dramatic improvement in bilateral cooperation, set to focus in the future on economy, military collaboration, investments, and infrastructure.

Regarding the Prespa Areement, Dendias said there is progress in its implementation, but some areas still require adjustments.

“Greece supports the EU accession of North Macedonia and other Western Balkan countries. This is our common goal. Starting talks will be a significant step forward, and its one of Greece’s main goals. We understand the disappointment stemming from the decision to postpone opening negotiations, but you need to look forward. Implementation of European values is crucial, and we offer our full support in this area,” Dendias said.

FM Dimitrov underlined that North Macedonia can count on Greek support on the road towards EU integration.

“Greece is our strategic partner, neighbor, and friend. The Prespa Agreement has opened a huge cooperation potential that needs to be utilized,” Dimitrov said.

He underlined that he expects the first session of the trademark committee and an expert meeting regarding new border-crossings between the two countries to take place soon.

In answer to a reporter’s question whether there’s a possibility of either side disputing the Prespa Agreement, Dendias said the position of the current Greek government is that the issue is a done deal and requires full implementation.

“We have a joint future, if we act in good faith,” Dendias aded.

FM Dimintrov also underlined that the agreement is part of our legal system and must be respected.