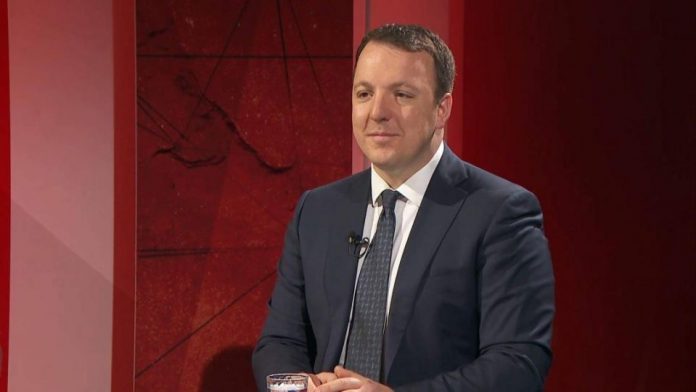 In the past few days we witnessed the eruption of “Racket” affair. The government is trying to manage it without allowing those at the top of the pyramid led by “capo di tutti capi” to be held accountable, but the fact is that it is clear to the general public that this is a well-designed and implemented operation for extort money from numerous businessmen throughout Macedonia. It is coordinated by the highest ranks of the government from the top of SDSM, and according to initial information a total of over 20 million euros have been extorted by businessmen. Part of this information is already known by the citizens, other part would likely become available as the investigation progresses, but most likely to be announced after the change of government and the collapse of SDSM and Zaev when the prosecution and judiciary are released from their constraints and pressures, and prevent businessmen of speaking out because they are blackmailed and the whole truth will come to light.
In the meantime, the urge for this power to fall is to steal what can be done in the few months remaining in power. Such a corrupt Government of Macedonia neither had nor will have. Even the greatest occupiers of Macedonia did not have such a hostile attitude towards the plunder of the people. Zaev and SDSM’s philosophy now is to stay in power for another month and steal whatever what they can. The most striking example is the state of healthcare. There is obviously just one intention in this department. Just take a look at the grant for a new clinical center. Without provided money and without knowing how much they are going for a grant where the main criterion with even 70 points out of a possible 100 is quality! The most subjective category for rating! A category that is included in the public procurement law only when SDSM is in power to have the legal opportunity to steal. While VMRO-DPMNE was in power the only criterion was price! So it will be after the change of power, because everything else is leaving a lot of space for manipulation. Theoretically one contractor could offer half a billion euros (as much as the government says the center would cost) another contractor to bid for 100 million lower bids, but get the first one because of the subjective quality criterion! It is clearly a robbery. And unfortunately this goes with the clinical center being the crime of the century. Or just take a look at the public-private partnership tender for sterilization. To give public-private partnerships what is the basis for every hospital and every health care institution that is regularly and well-executed is in itself a crime by a criminal mindset. Ever since it was announced I warned in one of my public appearances that the model from Albania would be copied and would get the same man as in Albania. And just a few days ago in the wake of the “Racket” scandal, it was almost unnoticed that the tender for sterilization was won by an Albanian citizen and a company we warned about. In this same tender, the price brought only 40 out of a possible 100 points.
These two examples alone illustrate the level of ease and lightness with which government officials get involved in crimes in the same way and with the same ease with which they have decided to take part in shameless racketeering.
Along with this blatant and exposed corruption, there is a total fiasco in the economy and a complete failure of government policies resulting from the corruption and incompetence of this government. So, for example, it can almost go unnoticed that Zaev mentioned that the contract with the contractor company on the express road from Veles to Prilep was terminated, which is extremely important for Pelagonija, not the Polog region as Zaev said. That road is has not moved from point A to point B since the change of power. SDSM has done nothing to finish it. And now the contractor is likely to sue for the breach of contract, and the state will also have to pay penalties. The situation is similar everywhere in the country, the express road Shtip-Radovish is standing still, grass has grown along the Ohrid-Kichevo highway and no one is working on it, no activities are expected on the Skopje-Blace or Kicevo-Gostivar highways. We haven’t heard anything about the railway. Neighbors have move ahead of us with infrastructure thus becoming an attractive destination for foreign investors. Overall a total incompetence and inactivity of this government that works just when there is something to steal, and spends all day devising schemes how to get money from a businessman. Unfortunately, they have brought the country into being an example for students from the Scandinavian countries who are pursuing their Master’s or PHD thesis on corruption. Rock bottom that has reached its end.
In all this incompetence and crime, young people are unfortunately packing their bags in one direction, as the situation becomes such that any enthusiasm for success is lost.
A sad story that only shows how a single government in a few years can destroy an entire country. After the next early parliamentary elections there will inevitably be responsibility for this, both political and judicial. Because that’s just the way to get to zero. And then with a lot of dedication and work to move things forward, for the suitcases to be filled for traveling to Macedonia, and not for racketeering or for leaving Macedonia.