If someone told me that the theater, which has five editions of the international “Bitola Shakespeare Festival”, will make a typo in Shakespeare in the printed materials on the play “Julius Caesar”, I would not believe it. However, on Saturday, April 28th, the name William Shakespeare was written at the premiere of “Julius Caesar (res publica or cosa nostra)” on the cover of the program, on a red sticker in white letters. The design of the edition is cute, and this sticker comes as a design solution that completes the print. However, when you are curious, and the play is ten minutes late, you also allow yourself to be creative, so you remove the sticker.

And then actually you realize that you are going to see a play by William ShakespRea. Eighty minutes later, the program’s typo is a priori decree on what the play is. “Julius Caesar (res publica or cosa nostra)” directed by Zlatko Pakovic, is the first play in the new season of the Bitola Theater, which was opened with the motto: “If you are fine, then never mind!”

When the Bitola Theater came out with this new motto (borrowed from the Serbian “Peschanik”) on the press conference about the premiere, it became unclear to whom it was actually addressed. The Bitola Theater, along with the Prilep Theater, is considered one of the best in the country, and this is due to the synergy between the ensemble and the technical team of the theater, their boldness and unity in the performances – plays that win awards and are played for a long time. The ensemble in 2017 played 195 plays, making the theater one of the most active in the country. If we consider the last three months of the repertoire, we will count more plays than the MNT for the same period. 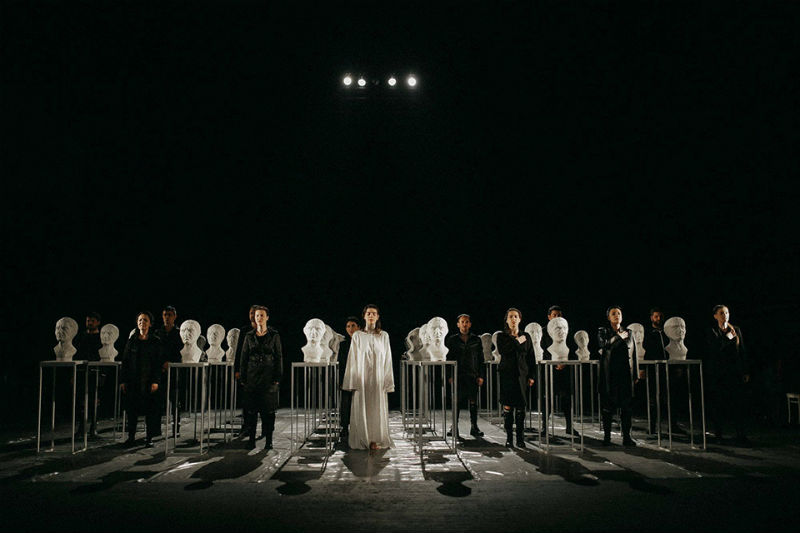 Considering that the plays are performed in front of a crowded theater, it means that the motto does not address the audience. Then followed the views about the directors. The Bitola Theater never feared, as they themselves say, “to get in the grips” with the biggest theater names from the region and beyond. Then what does this borrowed motto mean, and to whom is it addressed? Danish philosopher Soren Kierkegaard said “Life can only be understood backwards; but it must be lived forwards.” Going backwards, we first reach the publication of approved projects from the Bitola Theater by the Ministry of Culture this year, where Zlatko Pakovic, who opened the new season, Vladimir Milcin, Kokan Mladenovic and Ita Doron were selected as directors.

Milcin, one of the guests at the Pakovic premiere, will work on “The Dragon” by Eugene Schwartz. Nela Vitosevic will direct the same play in the MNT. When in the program of the Ministry of 2017, the play “The Night’s Dream” was approved for installation in three theaters (MNT, Theater Comedy and Bitola Theater), a revolt came up following the decision. The newly hired director at the MNT, Nela Vitosevic, this year will direct the same performances with two directors. Besides matching Milcin (“The Dragon” by Eugene Schwartz to set up in MNT), Vitosevic will set “The Seagull” by Chekhov in the Prilep Theater, while Nikolic will set the same piece in the MNT.

If we are fine, then never mind?
So from the premiere in April 2018, we arrived in December 2017 when the work “Julius Caesar” was applied by Pakovic for support from the annual culture program of Macedonia. In 2016, the performance “Philosophy of the Province – Christmas Oratorio for Radomir Konstantinovic”, directed by Zlatko Pakovic, was on the AKTO festival. The artistic director of AKTO – Filip Jovanovski invited him to participate in the festival, with the play and as a speaker in the public discussion “Art for Change”. Today, Jovanovski is the stage designer and author of the poster for the play “Julius Caesar”.

The last date is actually the fifth day of the camp before the government, after the big march on May 17, 2015. Paković is the first foreign guest to have an opportunity to address the citizens/campers. In his presentation on the importance of culture in building a healthy society, Pakovic points out: “… it is not terrible when someone lies to you, even when they invest so much imagination in the lie. It’s terrible and horrible when you are so foolishly lied to.”
Three years after his guest appearance in May, this April, at the conference about the play, Pakovic gives the following statement: “I think ‘Julius Caesar’ by William Shakespeare is the most important dramatic work that is today in front of Macedonia, and which is most adaptable to the situation in the country. Why? Because there was a change of a regime. Change of Nikola Gruevski’s regime that I identify as Cosa nostra “.

When Alan Moore, otherwise known as the author of the graphic novel – “V for Vendetta”, writes: “There is no coincidence. There is only the illusion of coincidence “… I’m already beginning to understand the borrowed motto. In fact, as a commentary on cosa nostra, the strategy of culture says: “If theater means nothing to you, then (this is) good.”

In what way does Paković read ShakespRea in Bitola? What reality corresponds to the murder of Caesar, and who is Caesar in Macedonia? Are not Caesars the young people who dreamed of living in a free state, and today they have moved thousands of miles away from home? Young people who wanted to create here, but their programs / ideas / projects were not supported? Young people who believe that new debt books need to be introduced and old debts should be abolished. To abolish any loan taken out for buying bread and milk. In Karposh 3 at the polyclinic “Bucharest” a billboard appeared with an advertisement to raise money for a birth grant! Hey, young people, you are Caesar, aren’t you?! Caesar dreaming for the return of power among the citizens and being emperors over their own future, as much as this republic is a republic today.

In this play, young actress Gribovska, who as a virgin, was sacrificed in the first scene. Well, bye – to you too, dear sister-in-law.
Zlatko Pakovic’s director’s credo in this play was a remarkable collage of previous stage solutions. The projection of the text that was used in “Philosophy of the Province” was used this time to design the names of the scenes and the text of the poems of the play. Jovanovski himself – the scenographer of the play coped with the scenery recalling his plaster statues from the exhibition “Spartacists or the Power of Love”. This time, instead of being placed on the floor and leaning on pallets, they are placed on high tables. On both sides of the stage are chairs where the actors await their order of appearance in a new scene. This stage decision reminds me of the play “Bible – The First Attempt” by Slovenian director Jernej Lorenci. 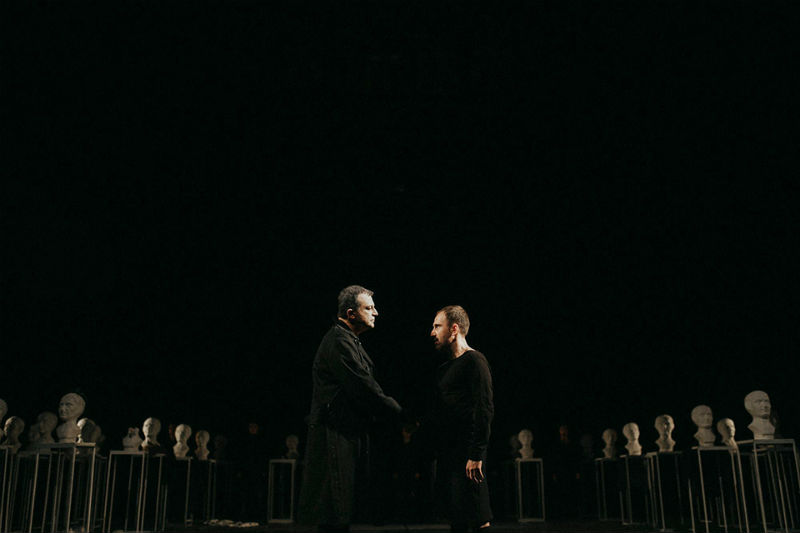 Actress Sonja Mihajlova is a brave choice of the role of Caesar. She, with her posture and transformation, is a believable Caesar, but only when it comes to non-verbal acting. In fact, even the speaking of most of the actors is so accelerated, which is more like going through the lines. The actors Djakovski, Projcevski and Mircevski play the roles of Brutus, Casio and Casca with nervousness, which as if it is a product of breaking a recently bought phone, or a goal that put the opposing team in the decisive match on a paid ticket; instead of aware self-sacrifices for the freedom of the Republic. Petar Gorko presented Cicero as a bureaucrat, but not as an orator. Only actor Ivan Jercic in the role of Mark Antony, remembered to take a breath between words. With this, he emphasized the importance of the replicas in which, through his masterful speech, Antony quotes a crowd of rebels against the conspirators of Caesar’s murder. In that scene, the actresses remain to seek justice for Caesar. They first mourn the loss of the great Caesar, and then they embark on a crusade, making the first killing, when instead of Cinna the conspirator, they kill Cinna the poet.

In addition to the other elements seen before, I also have to mention the use of balaclavas and tracksuits. Until last year, the audience may have experienced a catharsis on such elements in the plays. But today the audience is relieved because criminals are pardoned with such ease, so the audience is not afraid of masks, but of those who rob us without masks, staring directly at us.

If it was set out in this way a few years ago, this play may have had some meaning. If the alternative scene (which united under state sponsorship) associated with the resources it clearly had, would have made this play less ‘pamphlet’ and less boring, and at the same time more critical to the “spectacular” present.
And the theater will survive this, just as it survived so far!