“Unless the name dispute is resolved this year, the status quo will linger on for years,” Michael Roth, Minister of State for Europe at the German Federal Foreign Office, said during the press conference held together with PM Zoran Zaev on Thursday.

Roth said that both sides were willing to make a mutually acceptable compromise, adding that despite the key role of UN mediator Matthey Nimetz the Macedonian and Greek governments were those leading the process.

He pointed out the necessity of being constructive, creative and flexible, praising the positivity and creativity of both governments.

“I see the light at the end of a long tunnel,” Roth said. “We salute the positive climate in the relations between the two countries.

“We think both sides are willing to work out a compromise and resolve the name dispute. Germany is giving its full support to the resolution of this issue in the near future.”

Roth advised against drawing red lines and said he was in favor of the government pursuing a dialogue with the opposition.

He also praised Macedonia’s progress in carrying out the reforms required for its EU-accession.

“The country’s climate has changed considerably,” Roth said. “However, the accession-related reforms need to continue so that Macedonia can stay on the right track. The EC recommendation is a result of your Government’s efforts. Germany supports the European perspective of Macedonia and will follow closely its progress reports.”

He said that upholding the rule of law was the duty of not only the government but also everyone in the country, including the opposition.

“Independent legislature is crucial in the fight against corruption,” he said. “Citizens have to see results.”

Roth congratulated the Special Prosecutor’s Office on its successful work and stressed the importance of restoring trust in the court system and the need to resolve the telephone tapping cases.

He also congratulated the Government on its agreement with Bulgaria and the improved relations with Greece.

Prime Minister Zaev expressed his thanks to Roth for the German support. He described Macedonia’s progress during 2017 as a quantum leap from an oppressed country to a functional democracy built on the idea of a ‘single society for all’. 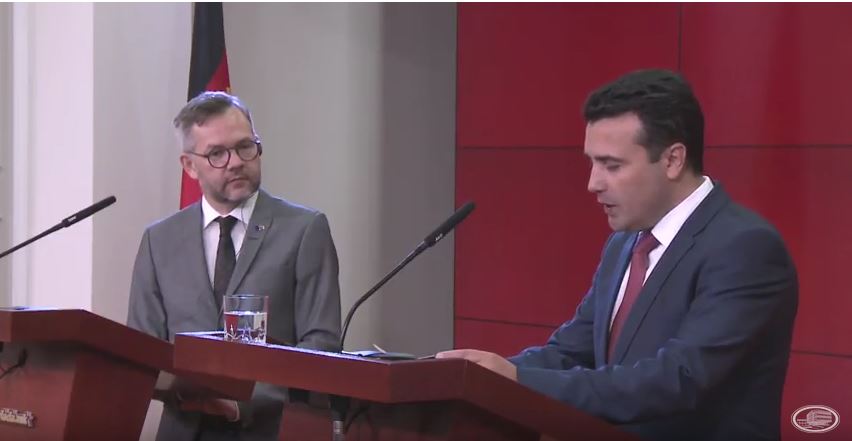 “The clear and unconditional EC recommendation is proof of this. We remain completely committed to reforms, good neighborly relations, and regional cooperation,” Zaev said. “Our goal is to start negotiations with EU and receive an invitation to NATO in 2018.”

“We are convinced that EU leaders have recognized the considerable momentum Macedonia has built up and that the time for our European perspective is now, this year.

“We’d like to move forward to a more prosperous future, contributing to a stronger European Union at the same time,” Zaev said.