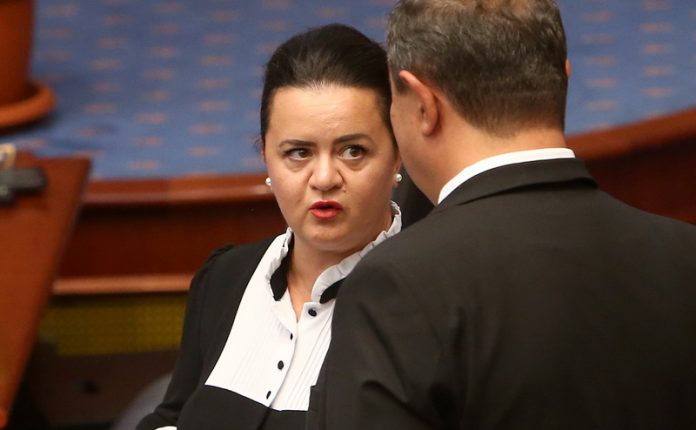 The Deputy Parliament Speaker and Member of Parliament Frosina Remenski was behind the scams committed by the President of the International Union, Bojan Jovanovski-Boki 13 with the NGO that was presented as a humanitarian organization. Remenski along with Jovanovski attended the meetings organized by Boki 13 with the companies from whom he was extorting money to give the impression that the executive branch was behind the proposed projects for the alleged construction of a Center for the Elderly.
The Prosecutor’s Office for Organized Crime and Corruption, one day before filing charges for part of the investigation, namely the 1.5m-euro racketeering conducted by Boki 13 along with Zoran Milevski-Kicheec , as well as former Special Prosecutor Katica Janeva of businessman Orce Kamchev , expanded the investigation and suspected a total of four more people of misconduct committed with the International Union.
Vice President of the NGO Jasna Mandic, Bok’s father Mile Jovanovski, Jovanovski’s assistant and Remenski are suspected of assisting Boki 13, and criminal proceedings are also being instituted against the NGO as a legal entity.The prosecution’s investigation so far has shown that starting from July 2017 to April 2018 Boki 13 deceived two construction companies, the Bitola-based company Pelister owned by businessman Siljan Micevski and the Struga-based company Drim Building. The informal owner of 1 TV had promised businessmen that he would provide state-owned unfinished land for the construction of a center for the elderly and mobile service center, and then state subsidies. He took 720,000 euros from Micevski that he later transferred to a certain retired woman, and 233,000 from the Struga-based company, money that was later transferred to the bank account of the Federation’s vice president, Jasna Mandic. People from Boki’s surroundings helped him, made contracts, raised money and paid them to other companies on a loan or donation basis. Prosecutors are seeking detention for Mandic, as for the other new suspects, including Remenski, they demand precautionary measures, citing flight risk. Most of the suspects offered to cut a deal with the prosecution.
Remenski is specifically charged with assisting fraud, and the other three suspects are charged with fraud and money laundering. Jovanovski is now charged with fraud and money laundering.
Remenski and Kiracoski were summoned as witnesses this summer to testify at the Prosecutor’s Office for organized crime. Kiracoski was at meetings where representatives of the International Union met with the mayor of Bitola looking for nursing home locations, but according to available information, the mayor did not settle for Boki’s fraud. Remenski was also honorary president of the International Union. However, the Prosecutor’s Office does not say whose accounts ended up with the money and it is still unknown where the racket worth 1.5 million euros went.
The Prosecutor’s Office will press charges today against Jovanovski, Milevski-Kicheec and former Special Prosecutor Katica Janeva. Boki was summoned to the Prosecutor’s Office on Wednesday night for a statement, or his defense, of the extortion racket, but instead he collapsed before prosecutor Vilma Ruskovska. From there it was taken with stretchers and taken to the September 8th City Hospital. He was released from hospital a few hours later and returned to the Shutka Prison, and the hospital director said he was in good health condition.
The Appellate Court did not accept his request to be released from detention, as for former Special Prosecutor Katica Janeva, she is also in detention. She decided not to give her statement to the Prosecutor’s Office, that is, to remain silent at this stage of the proceedings. The indictment will be filed without Jovanovski and Janeva’s statement.
(FFS)