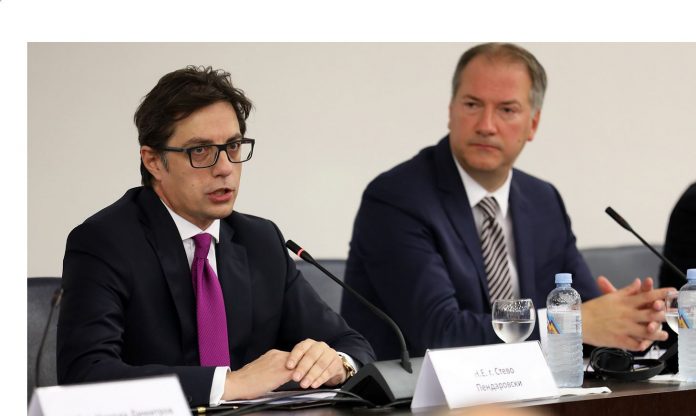 “The “Racket” case isn’t a benchmark for getting a date to launch EU accession negotiations at the moment, nor will it become one if authorities continue to handle the case properly,” North Macedonia’s President Stevo Pendarovski replied to reporters.

“I believe that the Racket case isn’t a benchmark for getting a date to launch EU accession negotiations at the moment, nor that it will it become one by the end of the year, as so far, authorities have taken all the appropriate actions. But, this is a complex case, so it’s best we leave them to it. The situation might change if the investigation is hindered in any way,” said President Pendarovski.

Minister of Foreign Affairs Nikola Dimitrov is nor quite sure whether the Racket case is a benchmark or not.

“In any case, our chances to secure a date to launch EU accession negotiations in October will increase if the investigation continues to progress,” Dimitrov pointed out.

He added that politics must not get in the way of the investigation.

“It’s crucial that the media report on the investigation process in a transparent and unbiased manner, as this will aid our diplomatic efforts,” said Dimitrov.

He added that the adoption of the public prosecution law will help the country secure a date to launch EU accession negotiations.

“It’s no secret that the diplomatic corps has been sending this message. We should continue the Special Public Prosecution’s work, upgrade resources and continue to fight against high corruption,” said FM Dimitrov.