When Hristijan Mickoski succeeded Nikola Gruevski on the party throne about ten months ago, almost no one expected that the new leader of VMRO-DPMNE would succeed in causing a great deal of revolt from the international community in such a short time, of which his predecessor needed for almost a decade of rule – and with manners that were judged as undemocratic, authoritarian, retrograde, and isolationist. Now, Mickoski as an opposition leader, is well on his way not only to contribute to further isolation of Macedonia, but also to isolate his party from the European family of Demochristian parties.
Former Assistant Secretary of State for European and Eurasian Affairs, Victoria Nuland, who has strongly assisted in resolving political crises in the country during the ruling eraof VMRO-DPMNE, was never put to position to write such a harsh letter to Gruevski as her successor Mitchell recently did with his open letter to Mickoski. Mitchell’s letter, which, according to party sources, instantly caused unrest and uncertainty between former and current officials of VMRO-DPMNE, does not seem to bother Mickoski much.

The incumbent leader of VMRO-DPMNE responded to the senior State Department official that “it is always darkest before the dawn”. Earlier, in an interview with Deutsche Welle, Mickoski pretentiously assessed that he was oppressed by not being allowed to address from the parliamentary rostrum (although he was not an MP), when it was already allowed to Federica Mogherini, Jens Stoltenberg, and other international representatives.

Beside Mitchell, President of the European People’s Party Joseph Daul also sent a message of disappointment to the Macedonian opposition several days ago. But that’s not what Mickoski, who has only fallen to his knees before his supporters at the pre-referendum protest rally of VMRO-DPMNE in Stip. 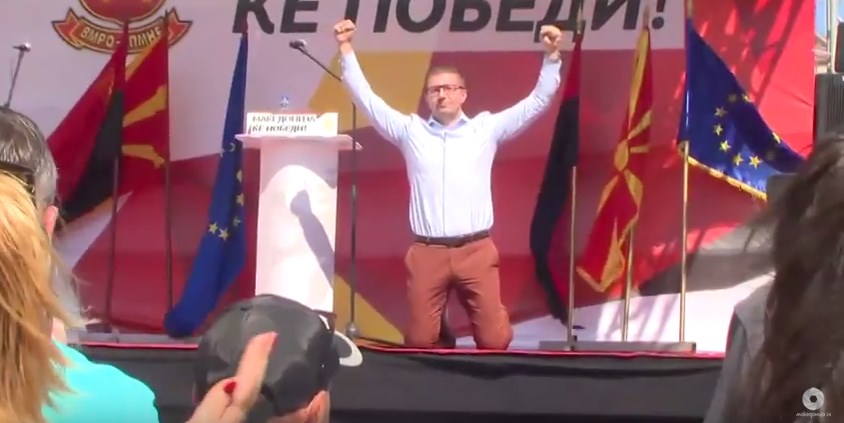 VMRO-DPMNE sources claim that Mickoski and the people in his closest surroundings are not concerned much about the possible EPP sanctions, which would ultimately mean excluding the party from the European family of Demochristian parties – a threat that has already been sent to the party of the Hungarian Prime Minister Viktor Orban. Allegedly, as a prevention of the possible exclusion, VMRO-DPMNE’s top is considering an option of joining the European Conservatives and Reformists – a Eurosceptic political group in the European Parliament. The largest parties in this group are the British Conservative Party and Justice and Justice of Jaroslaw Kaczynski in Poland, as well as the far right from Sweden and Norway and the Bulgarian VMRO of Krasimir Karakachanov. The group has been around for about ten years, but the Mickoski clique’s estimates have allegedly been soon to be more influential than the EPP.
While Mickoski persistently showing teeth to the international factors and the Macedonian authorities, who expect VMRO-DPMNE’s co-operation for the adoption of the constitutional changes, the parliamentary group of the party gradually differentiates a parliamentary nucleus that performs far more moderately from the party’s top in terms of the further implementation the agreement with Greece, in order to join Macedonia in NATO and start the negotiations with the EU. Such a more constructive and more progressive “faction” in the past period also crystallized in the leadership of the party, formed by Mickoski after his election at the congress in Valandovo.
Interlocutors from the VMRO-DPMNE leadership say that “reformers” are no longer the only ones who have a critical stance towards the policies of Mickoski and his closest associates. In the party, they say, a bigger critical mass is gradually being created, which do not exclude the possibility of demanding responsibility from Mickoski.

-After all the messages of disappointment that came from the international community, especially after Mitchell’s letter, it is clear that Mickoski’s leadership is put into question, interlocutors from the leadership of VMRO-DPMNE said.

They point out that various information circulates within the party about Mickoski’s relations with the former party leader Gruevski, who kept distance before and during the referendum, while in the past few days he was present in the assembly hall during the debate on constitutional changes almost every day. Gruevski, as we announced some time ago, moved out of the VMRO-DPMNE headquarters and rented office space in TC Paloma Bianca. Then, information began to circulate within the party that the relations between Gruevski and Mickoski have turned cold. Our interlocutors, however, comment that it is less important whether they both see each other and have coffee together, when it is obvious that the incumbent leader does not intend to introduce new policies in the party, but rather maintains the political course of his predecessor.

In the past period, Mickoski, as opposition, profiled himself as a defender of the policies that the former leadership of VMRO-DPMNE faced with isolation, criminal prosecutions and lost power. This was especially evident with the persistent efforts of the current leadership of VMRO-DPMNE to win amnesty for the cases arising from the wiretapping affair – and at the cost of blockade of the Euro-Atlantic processes of the country. What Gruevski worked on for several years, Mickoski achieved within a year. The only thing that did not succeed in is to keep the party base in strict discipline and subordination, and to achieve complete monolith in the party, as Gruevski did.