Skopje spent this whole winter on the list of the most polluted cities in the world, where it shared the first place mainly with cities from the Asian continent. The Nezavisen Vesnik survey,, which was published last  weekend, showed that it was a topic that also worries most of the citizens of Skopje. And, there’s a big reason for it: The latest report by the United Nations found that a quarter of all premature deaths and diseases worldwide are the result of pollution and destruction of the environment. Due to the lack of access to clean drinking water, as a result of environmental pollution in various ways, 1.4 million people die each year from preventable diseases, such as diarrhea and parasites. In addition, emissions of harmful gases are increasing in conditions of drought, floods and major storms, which are exacerbated by rising sea levels. Experts advise that the timely and appropriate protection of the environment we live in will mean reducing these consequences and preserving an enormous amount of resources.

The infamous “most polluted city” title, Skopje is sharing with several other Macedonian cities – Tetovo, Bitola, Strumica, Kavadarci, Kichevo, in which during the winter months the concentrations of PM 10 particles reach alarming levels. Accidentally or not, almost all of these cities have a greater presence of industrial facilities within,  or in their surroundings. According to the EUROSAI Joint Audit Report on Air Quality, the European Organization of Supreme Audit Institutions, the industry is the biggest polluter in Macedonia, although all official statements in our country were in the direction of the households being the biggest polluters. They rank second in the list behind the industry, while cars are rated as medium polluters, as for waste, agriculture and other factors are considered as smaller pollutants. But, despite such data, there is no precise study of how much the industrial capacities in Skopje actually pollute. After examining pollution from households and traffic, city authorities announced that this year they will be conducting a research on factory chimneys. 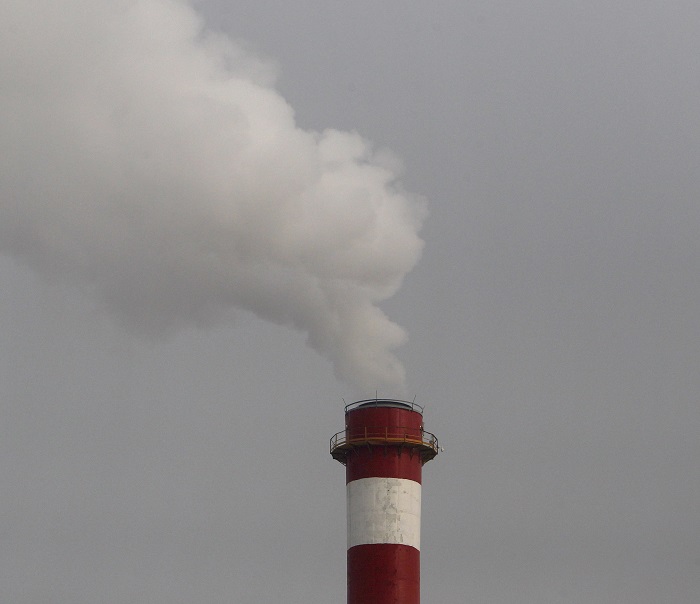 The report of the International Audit Authority for Macedonia there is a reason why this is so. It states that the institutions competent for this sphere and wider do not cooperate, that environmental inspections at central and local level work without any coordination, and the funds that the Government invests in fighting air pollution are too small. For now, the only prevention for not letting the industry get a hold on  the environment is the integrated environmental permits, which impose obligations for investing in new technologies and catching up with the modern times of a circular economy, which is the only way to have a sustainable life.

Permits for integrated pollution prevention and control (IPPC) are regulated by the Law on Environment. A-integrated licenses are issued by the Ministry of Environment and Physical Planning, while the B integrated licenses in Skopje are issued by the City of Skopje, and in all other cities they are issued by the municipalities. The purpose of the permits is for each industrial capacity to make a disposal plan or, if it is not possible, to completely remove the causes of adverse environmental impact.  Simply put, the industrial capacities that these licenses receive are based on a plan to limit pollution for a certain period, which explains the fact that Drisla has such A-permit, even though the citizens of Skopje perceive it as the biggest polluter in the city. The City of Skopje says that these licenses take into account the effects of air, water, soil, waste generation, noise, energy efficiency, prevention of technological disasters, the use of raw materials, etc.
“An initial step in the process of integrated environmental management is to provide knowledge about environmental media emissions: air, water and soil and to be systematized through the development of an integrated environmental cadastre, which is the basis for monitoring the indicators for the quality of air, water and soil. Also, the Environmental Cadastre is a reference point when analyzing the effects of the measures taken to improve the quality of the environment,” the City of Skopje said.
Out of a total of 131 licenses granted by the Ministry of Environment until the end of 2017, until the A-Integrated Permits Register has been updated, 25 of the capacities are in Skopje. Of these, they are mostly located in the municipality of Gazi Baba, a total of 11. There are also many in Karposh, a total of four, two in Aerodrom, and two or less in the rest of the municipalities. 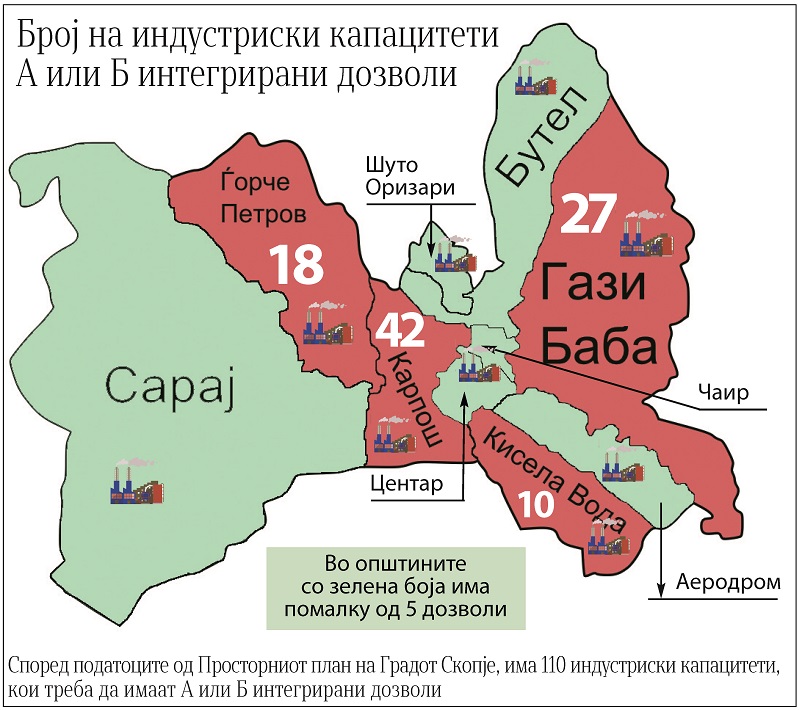 In total, according to the Spatial Plan of the City of Skopje, there are 110 industrial facilities in Skopje, which should have A or B integrated licenses. Most of them are located in the Municipality of Karposh – 42, then follows Gazi Baba – 27, Gjorce Petrov – 18, Kisela Voda – 10, and less than five in other municipalities. Most of the industrial facilities are from the food industry (37), which includes meat industries, bread and bakery production, and food and beverages. Less are from the chemical industry (21), textile (12), paper and graphic arts (11), and others, such as construction or the metal industry, which are less than ten. Beyond this control are small companies and power plants with a megawatt furnace, which are a factor on their own, but given their large number, they contribute to pollution when combined. Every major industrial capacity in the country must have A-integrated permits, and they must adjust its investment program with the protection of the environment in which it operates. No large factory can operate without such permit, but small ones can pollute without any control.

However, there are exceptions, and currently these are the state-owned REK Bitola and TPP Oslomej. Last year in July, it was announced that ELEM is actively working for submitting a request for obtaining A-integrated environmental permit for REK Bitola and that the compliance with the environmental plans should be completed this year. Due to non-realization of investments in environmental protection several years ago, the State Environmental Inspectorate closed Tetovo-based Jugohrom after environmental NGOs pointed the plant as the biggest culprit for extreme values ​​of PM 10 particles in the air in Tetovo.

B integrated licenses in the capital are issued by the City of Skopje, and in other cities municipal authorities. According to the registry of the City of Skopje, 22 B integrated permits have been issued so far that are operating on the territory of the City, and there are more that are in procedure. Of these, almost half of them, or ten of them, are located in the industrial zones of the Municipality of Gazi Baba. There are three factories with B-permits in Saraj, in Gjorche Petrov, Suto Orizari and two capacities are located in Aerodrom, as for Kisela Voda and Butel there is one factory in each municipality.