The final minutes before 18:00 were counted down in front of the building of the Macedonian National Theater on the Vardar bay, when the ceremony on the occasion of the 125th anniversary of the formation of the historic VMRO was scheduled. October 23 is a non-working day for all citizens, but has long been a name-day for VMRO-DPMNE. And, in days after the vote in the Parliament and the purge that occurred on the eve of the holiday, a different mood could be felt in the air. The catharsis for one, and the divisions for another will also reflect on the diversity of the guests. The media counted who came to celebrate the jubilee, but more importantly – who will give support to the party leader Hristijan Mickoski with their presence, and who, by not making an appearance, will show that they disagree with the leadership procedures.

Professor Vlado Popovski arrived, who is probably the only supporter of the party that did not get “disciplined” because of his publicly expressed position in support of the agreement with Greece. One of the founders of VMRO-DPMNE, Mane Jakovlevski, as well as Gjorgji Naumov, were also present. The director Ljubisa Georgievski arrived too. With 81 years of age, he had minor problems with walking, but is a dear guest for everyone, which was noticeable when younger guests came to greet him and wish him good health. Skopje’s Mayor Koce Trajanovski has appeared in public after a quite some time. 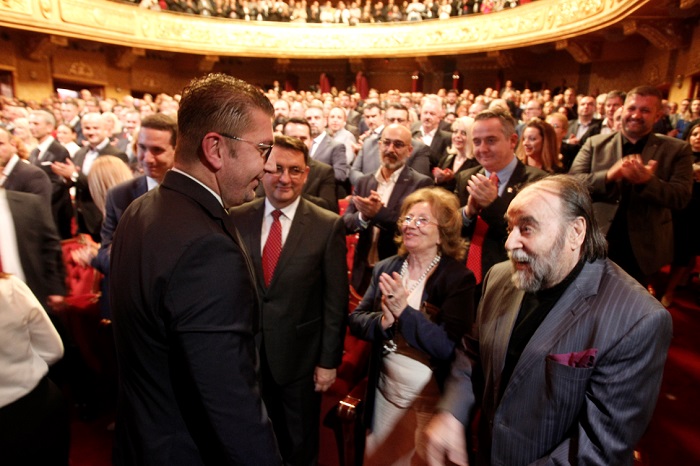 The two MPs, who have been charged in the 27 April case and who did not vote on the constitutional changes: Johan Tarculovski and Ljupco Dimovski of the Socialist Party, walked proudly in the hall. Apart from them, there is also the majority of the dissolved parliamentary group of the opposition. Coordinator Dragan Danev, Antonio Milososki, Ane Laskoska, Vlatko Gjorcev, Goran Manojloski, Krsto Jovanovski etc. But Daniela Rangelova was missing, who is the president of the Union of Women, as well as Ilija Dimovski, Trajko Veljanoski… GROM’s leader, Stevco Jakimovski was there to give his support, although his party members in parliament have “betrayed” VMRO-DPMNE. Professor Trajko Slavevski, who is a potential candidate for president of the state, received praise for his brave performances during this the past period. It was difficult for the audience to set a boundary between sincere admiration and shoulder tapping to get higher in the hierarchy.

Dr. Sasko Kedev stole all the attention along with former Culture Minister Ganka Cvetanova, who stunned with her styling. Cvetanova was especially active these past few days, calling upon her successor – Elizabeta Kanceska-Milevska whether she would vote for the Prespa agreement. It turned out she was well informed.

About fifteen minutes after 18:00, the main celebration started. The quiet jazz music was turned down and VMRO’s anthem echoed in the air. It’s was a sign that President Mickoski was arriving. His elegant wife Rozi was right beside him, followed by the Vice Presidents Aleksandar Nikoloski and Vlado Misajlovski, as well as the Secretary General Igor Janusev. He entered the hall and the audience began to chant his name. Few more times in the first minutes before the official part of the celebration began. He raised his hands and greeted them.

The 700-seat hall is packed. The guests and supporters of the party from the show business and the media were present, but mainly people from the Executive and the Central Committee, set up after the arrival of Mickoski to the party’s helm. Besides Saso Mijalkov and the others that were excluded, honorary President Nikola Gruevski also missing. Many of the founders, former ministers, officials, presidents were also missing. There is not a single representative of the diplomatic corps, nor of the government. One could get the impression that Mickoski plays alone against all others.

“Someone would say everything is over, everything is gone, but nothing is over, quitting is not an option. The government no longer has legitimacy, and whenever the next election would be, I will remind you not to trust those who have already deceived you about everything,” he said in a forty-minute speech, which was constantly interrupted by applause.

Mickoski noted that he always told truth to the people. He claimed that some of the “traitor” MPs admit that they had to vote because of pressures.
“If you were more resilient, we would have gone to early elections, Zaev would have been overthrown, and we will have won,” confident Mickoski.

“You made a mistake, although you knew that all the April 27th patriots were completely innocent!” He gave an assessment of the most traumatic event in the past two decades.

He demanded non-selective amnesty for April 27, that is, it should not apply only to lawmakers, but to all those who were charged.

The birthday ended around 20 o’clock.

“Let’s celebrate next year from the position of power,” the guests wished to each other.