Tampered or not, the purge that VMRO-DPMNE conducted Monday evening  will affect the party. Overnight, they were left without a quarter of their deputies in the parliament, without one of the main financiers, without one of the four mayors who were from their ranks, but also without the “chief” that was running the country and the party for ten years. With collapsed bridges for cooperation with other ethnic parties in the country and with international partners, leader Hristijan Mickoski and his associates will need far more from internal catharsis to get to the path of victory and regain power, as they have announced.

Vice President Mitko Jancev, UBK Executive Director Saso Mijalkov, former Health Minister Nikola Todorov, “reformers” Kostadin Bogdanov and Petar Bogojeski joined the seven deputies who voted for the constitutional changes and will have to leave the party. There are announcements that there will be new exclusions, but also resignations that will be submitted by people who are currently managing positions in the party. Some of them openly declared that they are against the policies led by the new leadership in terms of the agreement with Greece, that is, the country’s Euro-integration process. They were roasted because they cast their vote “against” the referendum, with which, ironically, the stance on the top was respected, that is, for everyone to decide whether and which way to vote on September 30th. MP Pance Minov, who is part of the VMRO-DPMNE coalition, has already said he was to leave the party due to the expulsion of his fellow citizen, Mitko Jancev from VMRO-DPMNE.

However, those who keep an eye on the developments in the VMRO-DPMNE corps know that the excluded have long been targeted by party bosses. Mijalkov, who, along with his cousin Nikola Gruevski, was bossing around until the so-called “bombs” were published, has long been a target of accusations that he has cut a deal with the Special Public Prosecutor’s Office in the cases against him in exchange for pushing the Prespa process. So, unconfirmed information was implied that he personally met with opposition MPs in order to force them to cross over to the ruling majority. Mijalkov himself on the eve of the session of the Central Committee said that it was not the right time for creating divisions, on the contrary, that VMRO-DPMNE needed unity more than ever. Stressing that the historical VMRO had pro-Western orientation, he denied that he influenced the president, MPs or other party organs in any way.

VMRO-DPMNE sources say that the idea of excluding Mijalkov originated from the vice-president Aleksandar Nikoloski, who commented before the attendees that Mijalkov worked solely in his own interest, while others shed blood for the ideals of the party. It went on to a public vote and one hundred delegates unilaterally decided to start a procedure for his exclusion from the party. At the moment, Mijalkov does not perform any function in VMRO-DPMNE, nor is a member of the Central Committee, so he was not able to attend the meeting.

Members of the CC also publicly voted on the exclusion of Bogdanov and Bogojeski from the “reform wing”. From the very beginning, they weren’t accepted by the membership of VMRO, which saw them as connection to Brussels because of their public fight against Gruevski and his style of government. Their commitment to accepting the agreement the reason the membership was looking for, so they kicked them out without blinking an eye. Nikola Todorov is also seen as someone who works against the leadership, and he is also accused of urging MPs to vote “for” in order to be saved from the SPO. 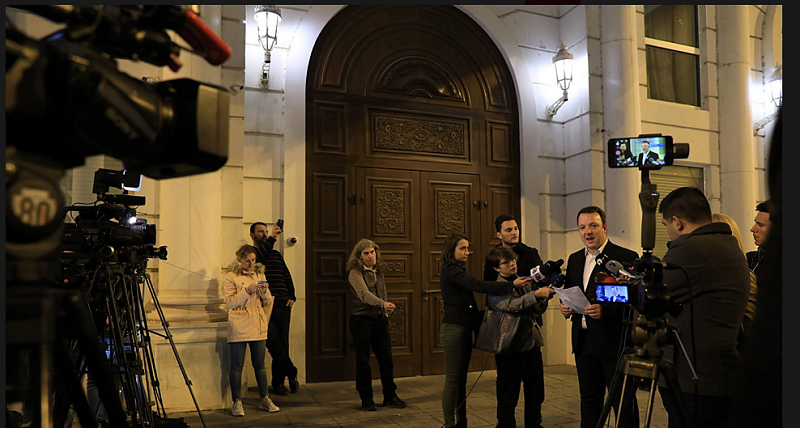 Todorov: I was kicked out by a faction of VMRO

“They excluded me from the transformed faction of VMRO, transformed into an anti-Western, anti-EU and anti-NATO faction, run by people who are guided and trapped by their own vanity, and who practice outdated methods of political action imposed by the old UDBA structures. I don’t see myself in such an anti-reform, anti-Western, undemocratic and anti-Macedonian faction of VMRO. Therefore, I want to thank them for saving me from the embarassement of being part of their sectarian faction. VMRO has been through a lot and has survived, so it will survive this too. Unlike their faction, my party VMRO-DPMNE is a European, modern, center-right party, whose members are Macedonian patriots, intellectuals, workers, honest citizens, the people,” Todorov responded.

Only Jancev was secretly voted out, because he was to be dismissed from office, not excluded. However, it is highly unlikely that the owner of Kozuvcanka will continue to help the party financially to the same extent, and, moreover, the logistics that every local election is won by the local powerful men.

Ilija Dimovski and Antonio Milososki, who both had ambitions to succeed Gruevski but angered him so he supported Mickoski as his successor, came out with amusing reactions. Dimovski said he did not want to participate in tampered processes, while Milososki expressed his support to Mickoski because of his position to boycott the referendum vote.

“We think that we had to reach this boiling point. After the betrayal in parliament, the house has collapsed to the ground and now we have to rebuild the foundations. But we will do this with clean people. This is a chance for us to clean the party from all that are, or were in it for personal interests. Yes, we will have a lot of work and we are aware of it. It is obvious that there will be no snap election and that is why we have time to start from the beginning. We do not think that we will suffer a great damage. On the contrary, we will become stronger,” VMRO-DPMNE stated.

Gruevski did not do the same as his cousin

President Mickoski, as they say, had strong support among the membership in both the executive and the central committee, which was also proven on Monday. He himself said he was ready for an extraordinary congress if there was a mood for such thing among the delegates, after which he left the hall in order to let them vote. He received unanimous support. However, his opponents explain that there are people appointed by Mickoski and his mentor Gruevski in the EC and in the Central Committee, which is why they were not expected to oppose him. But it may also come to requests for his removal in the next period. As for Gruevski, the party found that he has no relation to the pressures and threats to the opposition MPs, and he remains an honorary president. With this, the speculation about a quarrel between Mijalkov and Gruevski gains more power.

Asked how VMRO-DPMNE planned to form a government in the near future, considering its quarrels with the Albanian political parties, but also with Washington and Brussels, the ’White Palace’ said the party would work on intensifying contacts with the international community and proudly move forward with clear conscience.
“There is no reason for our international partners to be angry. The process will be completed in one way or another, and after the change of power in the country, they will certainly need someone to cooperate with. The same goes for the Albanian bloc, they will join the coalition of the one who wins the Macedonian bloc,” said VMRO-DPMNE.

Mickoski said yesterday that VMRO-DPMNE has always come out stronger, bolder and more resolute from every challenge and temptation.

“A new start has always meant a new hope, a new spark,” the leader of the opposition said.