The International Residual Mechanism for Criminal Tribunals in The Hague ruled on Wednesday on the appeal judgment to the first Republika Srpska President Radovan Karadžić, sentencing him to life imprisonment.

The appeal judgment was pronounced after reviewing the defence team’s and the prosecution’s appeals to the first instance judgment handed down by the Hague Tribunal in 2016, which had sentenced him to 40 years in prison. 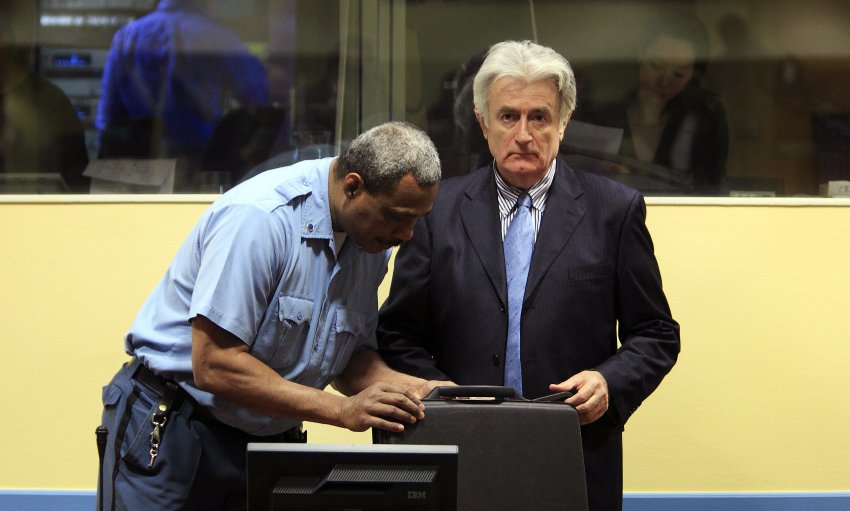 The first-instance ruling found Karadžić guilty of “genocide in the Srebrenica area in 1995”, attacks on civilians during the siege of Sarajevo and of taking members of the UN peacekeeping force for hostages. The Appeals Chamber dismissed the Prosecution’s appeal and confirmed the first-instance judgment, which acquits Karadžić of alleged genocide in other municipalities in BiH in 1992. Karadžić’s motion to reduce the sentence was also rejected.

This sentence triggered different reactions in Bosnia and Herzegovina, depending on the nation. Citizens of Bosniak nationality, who suffered the most casualties in the 1992-1995 war, are mostly satisfied with the fact that Karadžić will not have the chance to ask for an early release after serving two third of sentence.

Professor at the International University of Sarajevo, Emir Suljagić, who survived the genocide in Srebrenica, told the media that this is an expected judgment called “throwing dust into the eyes”. There are now two questions left unanswered, Suljagić says: “What is the punishment for the crimes committed by Karadžić, which are unforgivable?!”

“There is no adequate punishment for the crimes he has committed, because it is impossible to forgive what he ordered”, Suljagic said.

The second question is the question of the Republika Srpska, which he created.

“So, to sentence him, without consequences for the RS and its status, is simply throwing dust in the eyes. People who survived Karadžić’s crimes and now live in that entity – live in his life’s work”, Suljagić stated.

The Party of the Democratic Action, which was established by Alija Izetbegović, a Bosniak war leader, said that the verdict against Karadžić for genocide and crimes against humanity has a historical significance and carries messages that everyone in BiH needs to understand.

“The verdict on Karadžić confirmed the truth about a genocidal project aimed at the division of BiH through the systematic extermination of Bosniaks and other non-Serbs from the territory of the Republic of BiH under the political and military control of Karadžić’s regime.

It has been undeniably proved that Karadžić was at the head of a joint criminal enterprise responsible for the most brutal violations of international law since World War II, through mass killings, persecutions, torture and rape, and the destruction of BiH towns and villages.

We urge all political representatives in BiH to face the truth and acknowledge the facts contained in the Judgment, and not to place the mortgage for crimes on the entire Serb nation, but on Karadžić and other members of the JCE responsible for genocide. Only in truth, can we build the necessary confidence among the nations, and thus guarantee a secure future for BiH and the generations to come.

Serb Democratic Party, which was established by Karadžić, considers the verdict as political, unfounded and scandalously unjust.

“The SDS’ position on the International Court remains unchanged – it is primarily a political institution whose formal aim is to prosecute the gravest crimes committed in the former Yugoslavia, but in essence, its aim is the continued demonization of the Serbian people”, says SDS in a press release.

The SDS says that draconic sentences handed down to Serbian officers and political leaders are an attempt to put a lasting seal on the responsibility of Serbs for the civil war in the former Yugoslavia.

“A tendency to abuse the judgment rendered to Karadzic as a judgment to the Serbian people and Republika Srpska will not reduce the constitutional and political status of Republika Srpska guaranteed by the Dayton Peace Agreement nor will it contribute to the reconciliation of peoples in BiH”, says the SDS.

The press release says that politically motivated judgments will not diminish the tragedy that befell on all the peoples in BiH during the war nor will they reduce pain for innocent victims.

Republika Srpska National Assembly Speaker, Nedeljko Čubrilović, said that the Tribunal confirmed its true nature and fully committed itself to politics, proving that all these years was biased in the pursuit of political goals.

“This verdict confirms the conviction of the people of Republika Srpska that The Hague Tribunal was biased, selective and that it was founded with the aim of proclaiming the Serbs and their leaders as the sole perpetrators of the civil war in BiH. The Hague Tribunal, through its practice, invented the categories of “command responsibility” and ‘joint criminal enterprise’, which are almost exclusively reserved for Serbian officers and political representatives, some of them even indicted for verbal delict, regardless of the fact that Serbian political leaders did not commit the war crimes they were convicted of”, says Čubrilović in the written statement.

He said that it is clear that the Hague Tribunal did not contribute to reconciliation in BiH, which is why it was allegedly established.

“On the contrary, it has deepened the division between the peoples in this region, putting itself in the role of protecting one side, and releasing the perpetrators of documented crimes committed against Serb civilians, such as the crimes of Muslim forces committed in Kravice, Sase and Zalazje. Although in the Statute of The Hague, the tribunal, writes that the purpose of its establishment is the ‘principled punishment of all war crimes’, which should contribute to reconciliation in these areas, it is clear that the Tribunal did not fulfil its mission and showed political bias and a selective approach in its work”, Čubrilović said.

Analysts expect that the verdict will be the basis for further actions of Bosniak leaders who, it is certain, will use it for the next attempt for the dissolution of Republika Srpska and the unification of the country without entities.