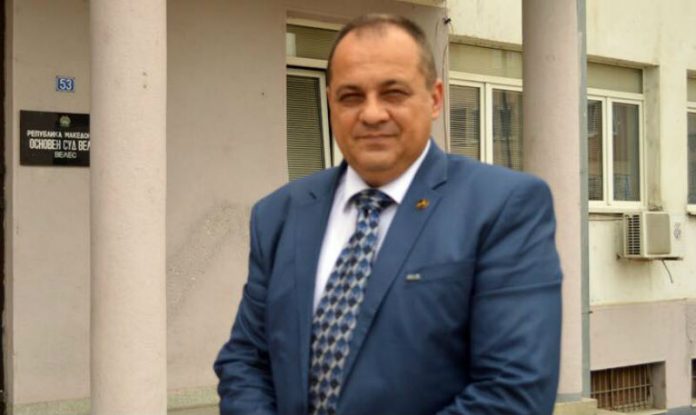 My colleagues and I were sitting in the café next to the court staring into the hot air that shimmers and distorts the image of the surroundings, creating a false movement of the stationary asphalt and concrete. I check what I’ve posted this time last year and I realize that last year’s post applies perfectly to today’s situation a year later. I posted the following – It’s an early August morning, the court empty is as a municipal treasury, and the trial is scheduled to take place on the third floor. The corridors are as hot as the Macedonian political scene, and the judges are still as sleepy as justice. Judicial administration without will and eagerness as an Ohrid waiter, Justitia still with her blindfolded eyes and her blunt sword. In a word, everything is in place as usual, the situation is normally abnormal.
Everything has been abnormal for a long time here in this godforsaken country, everything is standing still and nothing is moving except those who move abroad forever, far from home, away from the Balkan madness. Nothing has been thriving here for a very long time and it only boils down to crime and criminals and greed and lies. Leaves have not moved here for a long, long time because municipal stepfathers and stepmothers with the help of the construction mafia cut down trees and stopped the wind with mindless buildings and illegal construction. Hellish heat destroys the city just as stupidity and ignorance, perversion and politics, crime and servility destroy the minds of the people. Necrosis of the mind, infarction of the system and society, a diagnosis that has been long established.
We keep quiet, depressed by the past that is still our present and how the future will be for us. We keep silent not to talk about the only thing that is said here in this godforsaken country, politics and crime intertwined like snakes in ecstasy. Looking at the distance we do not notice the arrival of a young colleague into the café, smiling and humming a song from the “Saturday Night Fever” film. One of his colleagues calls out – John Travolta and Olivia Newton John, and this young colleague answers – No, Johntra sings this song without Olivia. We all look at him in amazement and say – You mean John Travolta, and he repeats – Nooo, it’s Johntra Volta, his first name is Johntra and his last name is Volta. We tried to convince him that his name is actually John, not Johntra, but it was all in vain.
Just as we have failed to show and prove that John is not Johntra  to our colleague, all these years we have failed to show and prove to politicians that the people are not servants and are not sheep. We have failed to show that we can handle crime, that it is not a profitable business and that you could go to prison for it. We have failed to create a rule of law state in which the institutions of the system fully fucntion, a state in which there is a separation of powers, a state in which there is a rule of law that is equal for all and applies to all. We failed to create a society of honest people in which virtue is valued, a society of normal living and progress, without hatred and division. We failed to preserve what our forefathers created and built with their own sweat and blood, we did not learn how to be ourselves and be proud of what he have, we didn’t learn how to respect our neighbors. We did not learn how to stop differences from dividing us, nor did we learn how to make similarities unite us, we learned nothing, and we forgot everything we already knew.
Instead of normal we nourished the abnormal and created a state in which the party is the mother and the leader of the father of the state, the state treasury is their wallet, and the official post a cure for hemorrhoids on their greedy behinds. We have created a state in which power is the aim and means of satisfying the personal interests of individuals and party servants drowning in crime and debauchery. We have created a state in which the law is only for smaller fish, and for the big criminals and officials the Pope’s mercy is applied by buying, bribing and selling indulgences. We have created a state in which power is not divided into legislative, executive and judicial, but divided by relatives and friends. We have created a society of lazy spineless people laying on the beaches of neighboring countries, criminal businessmen with money transferred to foreign accounts, and moral waste presented as avant-garde. We have created a society in which doctors of science wash dishes in restaurants or serve semi-literate rednecks, trendsetters, call-girls and socialites in nightclubs. We have created a society in which the spin is true and the truth a lie, a society in which everyone records everyone else, and the recording means nothing and is no evidence. We have created a society in which content is not important but party comfort, we have created a society of affair and spin, of a society of excuses and justification, a society of irresponsibility, dishonesty and non-transparency. We have created a society of robbers, bribers, criminals, spineless men, policemen and schizophrenic supporters. We have created a society in which the truth is defamatory.
I still hear my colleague’s words about Johntra Volta, and they instantly remind me of the Upper Volta. Maybe it would be a better if, instead of North, we added Upper to the country’s name, like the Upper Volta, and rename ourselves to Burkina Faso, which means a land of incorruptible people. We are far from Volta and Burkina Faso there are punishments and justice.