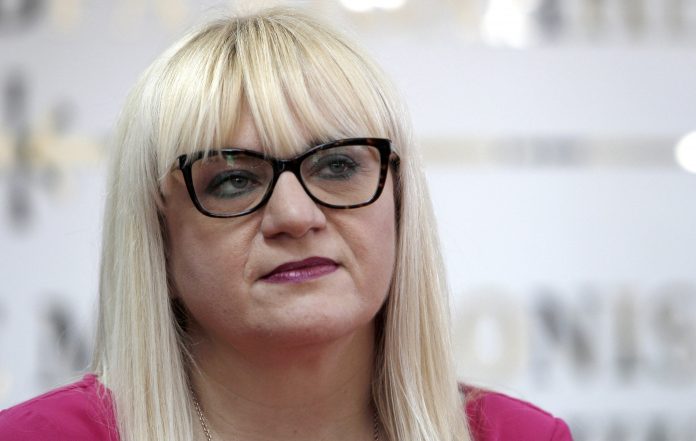 Passing the Prosecution law will be a particular challenge because we need to get votes and support from people who are suspected or accused of crimes, or from political parties whose management members are suing. The stumbling block in the negotiations with the opposition is not Katica Janeva, as her term ends on September 15th. I have only met Bojan Jovanovski twice at the launch of 1TV and the television’s first birthday. If we do not reach an agreement with VMRO-DPMNE on the Prosecution law or fail to secure a two-thirds majority in Parliament, we are considering other options to continue the fight for justice.

These are just a few of the points in Nezavisen Vesnik’s interview with Justice Minister Renata Deskoska.

Minister Deskoska, negotiations between the government and the opposition on the Prosecution law continue this week, but they appear to be in a worse political climate now than before the summer holidays. Is there any hope of a compromise that will guarantee a minimum of 80 votes in Parliament?

– The political climate for adopting this law has never been good. I said at the beginning of my term that the adoption of the Law on the Public Prosecutor’s Office would be a particular challenge, given the fact that we are supposed to ask for the votes and the support from persons suspected or accused of criminal activity or of political parties against whose members of leadership litigation is on one hand, and government’s determination that is backed by the EU on whose doors we are already knocking, for the law to not include amnesty of crimes. That is why the political climate during all the discussions on the law was bad. But at the same time, such a situation could also be treated as a good climate in which all political parties and caucuses with their support had the chance to show that they were truly committed to the fight against crime and corruption. Unfortunately we did not see such a will among the main opposition party. And when there is no will to do so – one can always look for different reasons for excuses, and the easiest way to do this is “blame the political climate”.

In this past period we have heard points where the opposition does not agree with the law drafted by the government. First of all, the section of the text of the law stipulates that Special Prosecutor Katica Janeva will be automatically transferred to the newly formed Prosecutor’s Office for fighting Organized Crime and Corruption, and to move the entire SPO team and capacity there. Do you find that part appropriate now, after the unveiling of the “Racket” affair?

– The stumbling block during the negotiations of the law is the request to close the proceedings initiated by the SPO after the first 18 months, and to destroy the evidence so far collected. This is the key issue for which there are irreconcilable differences. The rest of the issues are issues that can be discussed without any problems. One must bear in mind that this is not, and should not be a law that resolves personal issues, but rather principles. I have made it clear during the talks, but also in the interviews during the negotiations that Katica Janeva is not a stumbling block. The principles that should be adopted in the law, not personal interests or conflicts, are important. Given that the new law provides for the two prosecution offices – for organized crime and the SPO to merge, it makes sense that all prosecutors whose term lasts and all employees of the two prosecution offices will move to the new prosecution. Katica Janeva is not included in the package because her term ends on September 15th. But when talking about specific individuals, whether they are prosecutors or just employees in the prosecutor’s office, we must be aware that if their criminal liability is proven, they would be removed from their jobs by a court decision, no matter where the law provides that continued their career. Until the verdict is reached, the presumption of innocence remains.

The opposition also demands that the proceedings initiated by the SPO so far in accordance with the deadline set on June 30, 2017, be transferred to the new prosecution. How feasible is this?

– The law that we have proposed in the Parliament proposes that the procedures initiated by the Prosecutor’s Office for Fighting Organized Crime and the SPO be transferred to the new Prosecutor’s Office in the phase in which they already are. The difference is that the main opposition party is opposed to taking over the cases opened after June 30, 2017, which would practically mean closing, or terminating these cases. In order to have justice that is fully established, we need to stay focused and consistent for the resolution of all SPO cases the way we demand resolution for the “Racket” case.

-This is the most urgent request and it was agreed upon at the first meeting after the new Government law was submitted to the Parliament. This request is a little overdue after 10-11 years of power, and now it serves as a facade or a mask for hiding to someone who says that he fights for an independent and strong prosecution.

The “Racket” affair shattered Janeva’s credibility and the credibility of some of the other prosecutors, and recent events speak of internal disagreements and tensions within the SPO. Is there any kind of force in this prosecution, which was formed to fill out the anomalies of the basic prosecution and prosecute the criminals from the former government, to stand up on its feet again and start over?

– In my opinion, responsibility should always be individual, not collective. Hypothetically, because of the irresponsible behavior of a minister, deputy director, mayor, etc., we should not shut down the institution, but instead sanction the one who acted irresponsibly. It is therefore very important that an investigation into the “Racket” case is carried out as quickly as possible and present all the evidence. As for the institutional capacities, remember that the SPO was established because the Public Prosecutor’s Office for Fighting Organized Crime was not functioning. We now see a situation in which this prosecution, which was practically “written off”, was working and dealing with serious cases such as the “April 27th”case , “Racket” and so on. Therefore, the new Draft Law on Public Prosecutor’s Office contains a solution by which these two prosecutor’s offices merge to utilize the capacities of the two prosecutor’s offices in the fight against crime and corruption.

A session in parliament to discuss prosecution law is scheduled for next Tuesday. When is the deadline for reaching an agreement, considering that Janeva’s term ends on September 15, and we are already awaiting Brussels’ decision in October to get a date for EU negotiations?

– It would be really good if the new law comes into force by September 15th, because, as a state, we will send an unequivocal message that we are united and committed to the fight against crime and corruption.

Prime Minister Zaev announced that in case the negotiations fail, other measures will have to be implemented, without specifying which ones. It assumes that they would go for a two-thirds majority without the opposition as in the case of the name agreement. But does the government now have the power to get the necessary votes without involving the opposition?

– There are several options for adopting the law, but there are several other options if the law is not adopted. I think now it is more important to focus on providing consensual support in Parliament.

Has the time come for a new Przhino agreement that will tackle other contentious issues: the census, the election model, and early parliamentary elections? Or do you believe the situation is still under control and can be handled with minor adjustments?

– The situation is quite different from the one that led to the Przhino Agreement. Probably the main opposition party, with its destructive behavior, wants to create the illusion of resemblance, but they are also aware that there are no arguments for it. We have not heard serious suggestions and remarks about the Census Law, we have not received any stance on the Electoral Code, and it seems as if the opposition asks for early elections and prays it never gets them.

Minister Nikola Dimitrov says he has never been friends with Bojan Jovanovski, because he “felt that something was up”. You, in turn, can be seen posing in photos with Boki 13. Didn’t you “notice” anything?

– You could see me on two photos of events related exclusively to 1TV, its launching and its first birthday. I have neither documented nor undocumented situations in which I have socialized with Bojan Jovanovski. I personally considered and still believe that the existence of a new medium that has gathered the founders of Macedonian journalism, such as Aleksandar Chomovski, Aco Kabranov, Borjan Jovanovski, Gordana Duvnjak, Sasho Ordanovski, Jadranka Kostova, is positive for us. When I have been invited to events related to the existence of the media, I have attended because I believe that pluralism in the media space can contribute to better informing the public. Otherwise, generally, after hearing speculation about all kinds of sources of funding of various media – websites or televisions, that they are financed by foreign countries or funds that the previous government pumped out of the budget, and then repaid through foreign companies and the like, I think what What happened with the violent shutting down of A1TV by the previous government is something that must never happen again. The authorities can investigate the origin of the money, but not all activities must be at the expense of freedom of information. Right now, while giving this interview to your newspaper, I must tell you that I neither know, nor am obliged to know who your boss is, or the sources that are funding your paper.