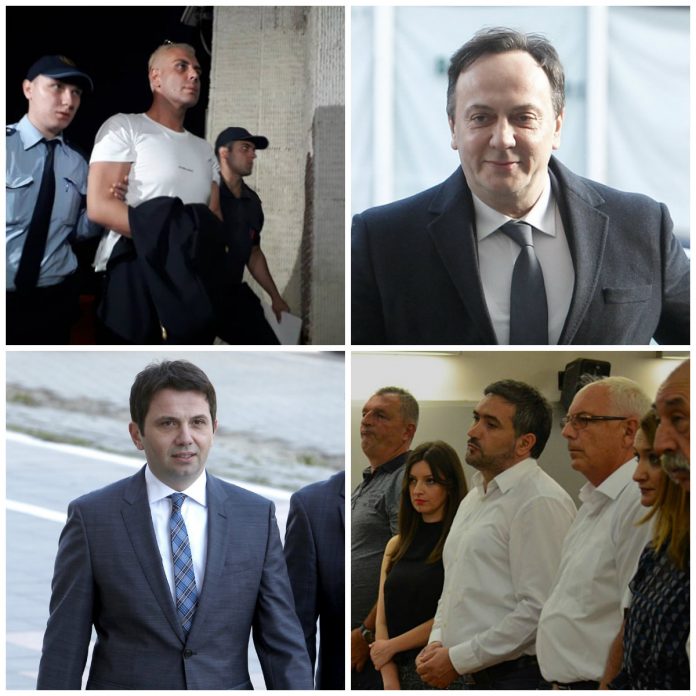 All defendants who could not get pregnant became ill. This joke that is constantly shared on social media explains the health state of the famous names of the political elite that are supposed to go to prison, or are already in prison. The latest defendant to be admitted to hospital is the main suspect in the “Racket” case, Bojan Jovanovski known to the public as Boki 13. Yesterday afternoon, escorted by the police, he was taken to the Emergency Center in the Mother Teresa Clinic complex for a check-up, that is, a preparation for an already scheduled second surgery. Although this second surgery was supposed to be done in a private hospital that has been linked to Orce Kamchev, Boki personally requested to be examined in a state-owned hospital and have his surgery there.
The director of the Skopje prison in Shutka, Esad Rahic, says that Boki 13, as a detainee, has the right to ask for approval for a medical check-up. If the chack-up cannot be done in a state-owned hospital, the court will decide whether Jovanovski can be examined in a private hospital, where he should be operated on. Public speculation is that Jovanovski has had gastric bypass surgery in a private hospital that is linked to Kamchev, the businessman from whom Jovanovski extorted money. The private hospital is suing Jovanovski because he has not paid for the first surgery, therefore, there is a possibility that his second surgery will be done on state costs.
Former Minister of Transport and Communications Mile Janakieski was treated in a private hospital, who was detained for illegal sale of state land, a case opened by the Prosecutor’s Office for organized crime and corruption. Although his lawyers claimed that Janakieski had to have an urgent heart surgery, he was taken back to the Detention Jail Skopje after his medical examination. According to prison information, Janakieski’s health state is stable, he has had medical tests, but no surgeries.
Businessman Sead Kochan got sick before going to prison, as well. A few days before July 17, the date set for Kocan to begin serving his prison sentence, he was admitted to a private hospital and delivered medical documentation to the court requesting his sentence to be postponed. A judge for the execution of sanctions reviewed the documentation and rejected his request, but he also appealed to the Criminal Council, which should now make a final decision whether to postpone the serving of prison sentence of four years and eight months to the businessman.
The Criminal Council should also decide on the former director of the UBK Sasho Mijalkov whether he will get his passport back or not, which Mijalkov asked for because he, allegedly, had an appointment for esophageal surgery abroad. His defense team claims to have a document from the Clinic stating that such surgeries cannot be performed in North Macedonia.
According to our information, Mijalkov was not examined at the Clinic for Gastroenterology in Skopje, although his counseling team on June 8 asked for a response from the clinic whether there is a method to solve Mijalkov’s problems with his stomach and esophagus. However, the Clinic claims that it did not have a patient under that name and that it did not give a council opinion for treatment abroad. The clinic only responded to the question whether such a procedure can be done at their clinic, but explained that in order to do such a procedure, the clinic first needed to make an assessment whether that procedure was really necessary.
“There is no council opinion, there is an opinion whether this procedure is done here. In order to get any specific opinion about a particular person, the clinic’s rule is that the person should be examined, evaluated at the clinic, and then the expert council decides on the need for any further treatment,” the Clinic told Nezavisen Vesnik/Independent Daily newspaper.
Fatime Fetai, the special prosecutor who led the “Titanic 2” case that cost Mijalkov his passport, gave a negative opinion because unofficially, there is nothing in his medical documents about an urgent surgery that needs to be performed out of Macedonia. However, the final decision on whether Mijalkov’s passport will be returned will be made by the court.
A few months ago, the passport was returned to businessman Orce Kamchev so that he could attend a board of directors, and the public found out about this only after seeing him celebrating the victory with Skopje’s handball players in Cologne. The SPO also returned the passport to Cvetan Pandeleski, who is also under investigation for the “Empire” case, for a medical treatment abroad.For now, all suspects are available to the prosecuting authorities. Former Interior Minister Gordana Jankuloska, although she has a final court verdict, did not go to jail. First, she postponed her prison sentence due to her newborn baby, and now the execution of the sentence is on hold, while the Supreme Court is reconsidering its first-instance verdict.
Medical documentation also saved the accused for Martin Neshkovski’s murder. Igor Spasov has been out of prison for over a year now, instead of serving his 14 years of prison sentence in the Idrizovo Prison.
“Sick prisoners are under the Ministry of Health through public health institutions, in the place where the institution is located. They have the same treatment as free citizens. But as there are problems in public healthcare, there are problems for prisoners, as well. The decision whether someone will come out of jail due to illness is made by the judge for the execution of sanctions,” said the Administration for the Execution of Penitentiary Sanctions.