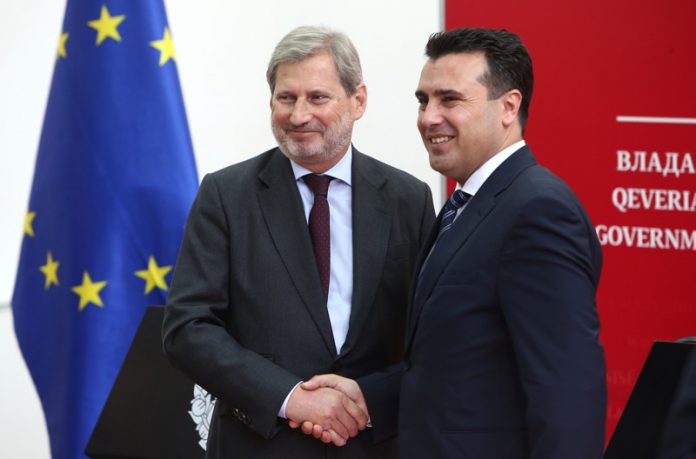 “We are still working on getting both states to negotiate,” Hahn told the paper. “But it is no secret the mood among the member states for North Macedonia is simply better.

“Both countries have met the requirements set by EU member states. That’s why we gave a recommendation for both countries. But North Macedonia has achieved not only the required reforms but also the historic Prespa Agreement and the Friendship Treaty with Bulgaria.

“For Albania, unfortunately, problems are coming to the foreground, such as that the opposition is not in Parliament, that the government has difficulties in maintaining dialogue, and that there is an impeachment procedure against the President.”

According to Hahn, North Macedonia’s government set an excellent example and made efforts to involve the opposition. He recalls he met the opposition leader and appealed to him to be constructive.

“They [North Macedonia] were able to resolve a decades-old political dispute. And there’s a great deal of political courage because this decision was associated with high personal and political risk.

“Of course, this also applies to the Greek side, but especially to North Macedonia, where the opposition has been against the agreement. In the beginning, only 20 percent of the population supported the Prespa Agreement, and that it has now been implemented is the outcome of the government’s leadership. This must also be recognized and rewarded accordingly.

“It was also an incentive for the region. When we signed the Prespa Agreement a year ago, there was momentum to reach an agreement between Serbia and Kosovo. Unfortunately, this positive development has been halted by the introduction of the 100-percent tariffs on Serbian goods in Kosovo. The solution of the Serbia-Kosovo conflict is central to the development of the entire region,” Hahn says.

Hahn’s interviewer notes that, except for North Macedonia, which made efforts to curb its aggressive nationalist rhetoric towards its neighbors, the region was still rife with nationalism and hate speech.

“Yes, and that’s why it’s so important that North Macedonia be rewarded for all these efforts,” Hahn says. “Because the other governments in the region know very well that the path of Northern Macedonia is right.

“In this respect, the politicians in northern Macedonia are a trendsetting example. So, if North Macedonia gets the go-ahead for opening accession negotiations in October, which I expect to happen, then I hope this will have a positive impact on the entire region.”

“The example of North Macedonia shows that this ‘state capture’ can be overcome as the ruling party has committed to an inclusive approach and taken measures to separate state and party interests.

“We start and finish the accession negotiations with each country by opening Chapters 23 and 24 on justice and security. So there can be no accession unless the criteria set out in these chapters, such as the rule of law, media freedom, fundamental rights, and independent justice, are met,” Hahn says.

Asked if he’s disappointed in the Special Prosecutor, who resigned amid allegations of corruption, Hahn says he doesn’t comment on any ongoing proceedings but hopes the investigation is independent and comprehensive.

“The fact the investigation started immediately is a sign the judiciary is working,” Hahn says.

“The government’s approach of integrating the Special Prosecutor’s Office into the public prosecution as its own independent department seems to be a good approach, and I hope the law will be adopted as soon as possible.”

Hahn, 61, who has served as European Commissioner since 2014, says he’d like to continue contributing to enlargement and neighborhood policy. He says he talked with Ursula von der Leyen, although not about his own appointment.

“I said that I would like to stay in foreign affairs because in the meantime I’ve had expertise that hardly anyone has had at the European level,” Hahn says. “No one else has been in the Balkans for so long. I have made the Western Balkans a focal point of my work precisely because this region is of great strategic interest to the EU. And it is not just the expertise in the Western Balkans that’s important, but also values such as experience, networking, and readiness to get things done,” said Hahn.