About 60.000 Greeks gathered yesterday in Thessaloniki for the protest paid and organized by the diaspora and the right-wing organizations in the country, in order to demand from the government in Athens to not accept a name that includes the word “Macedonia” in the negotiations with our country. More people showed up at the protest than expected, but less than the one held in 1992 on the same occasion and was attended by about a million Greeks, which is the best indicator of how much the name dispute has lost significance in the neighboring country. The protest was filled with Greek flags and flags with the sun from Vergina, slogans such as “Macedonia is Greek” were shouted, signs with messages “Macedonia was, is and will be Greek”, “Remove your hands from Macedonia”, “The name is our soul “and such were carried. The protest, according to the estimates, was also very traditional, more precisely there were participants who, according to how they were dressed and symbolized, resembled the “Tvrdokorni” organization in Macedonia.

The message that Macedonia is Greek was the focus of all those who addressed the audience. Some of the organizers said that the one who gave up the name Macedonia would be a national traitor. Although the Greek Church did not formally support the protest, there were metropolitans from northern Greece, and the Metropolitan Anthimos of Thessaloniki also addressed the gathering. 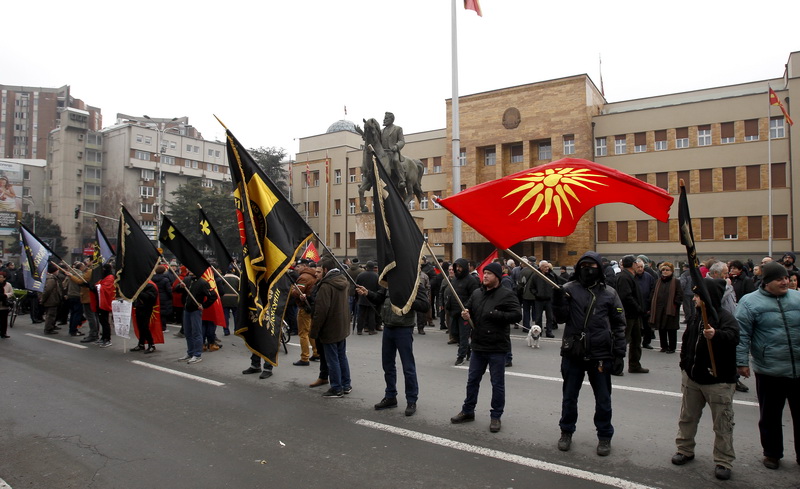 Almost at the same time, there was a counter-protest of leftist and anarchist organizations, but the turnout there was very small. The messages they sent through their posters were that they were against all nationalism, that their homeland was the whole country and that they would not shed a drop of blood for names and interstate conflicts. According to local media, there was a small incident between groups when anarchists with bottles and stones attacked a group of protesters who were flocking to the protest with Greek flags 500 buses were provided for the participants of the big protest, which came organized from all parts of Greece. And the political parties that are part of the Greek parliament, Union of Centralists and Golden Dawn, officially announced that they will participate in the protest.

Before the protest began, the newspaper “Ethnos” published the entire interview with Prime Minister Alexis Tsipras, who, due to the misunderstanding of his statement’s context on the Macedonian nation, has sparked reactions in Macedonia, thus jeopardizing negotiations on the name dispute. In an interview, Tsipras said that Athens was looking for a name that would apply to internal, bilateral and for use in the UN, stressing that if there is an opportunity to resolve the dispute, it would be national stupidity not to use it. According to him, after the political change in our country, he sees a government that it is determined to take steps, but it remains to be proven in practice.

Regarding today’s demonstrations in Thessaloniki, the Greek Prime Minister responded that he respects the sensitivity of his compatriots from northern Greece, stressing that he is half Macedonian, because his mother was born and raised in the Greek district of Macedonia, from the parents of refugees from eastern Thrace. But he adds that national interests are not defended by protests, but with negotiating ability, with international alliances, with set goals and sobriety.

– For 25 years, our neighbors have been recognized by many countries under the name Republic of Macedonia. We fight everywhere for them to be called FYROM, that is, with the complex name that contains the term Macedonia, but without any determinant that would prevent the appropriation of both geography and history. So, if there is a possibility for a solution that will remove these negative facts that were imposed in 1992, then it will be national stupidity not to use it – explains the Greek Prime Minister.

Alexis Tsipras in an interview with “Ethnos” says that the name dispute is not an internal issue, but European and international, and once again emphasizes that for the official Athens the main theme is irredentism.
– If we want to find a viable solution, we need to look for a name, but also a wider framework for a treaty that will not leave room for irredentism and historical inaccurate demands. We need both sides to approach the problem realistically and with wisdom. We should not leave room for confrontation between the two peoples because the things that unite them are more than those who separate them – says Tsipras.
The Greek Prime Minister is deeply convinced that a solution that would be of national interest would be voted with a majority of deputies and commented that Kammenos will not become Samaras, which indirectly means that the leader of the Independent Greeks will not create problems in the Greek government.

The Greek prime minister for “Ethnos” said that a Macedonian nation never existed in ancient times, as there was no nation of Athenians or Spartans, and it is not absurd that the term Macedonia be included in a composite name, with a geographical or time determinant that will apply to all, so that it will be clear that no one demands territories or history of other nations.