The excavators from Vodno should be removed until a well-established and mutually acceptable solution for the route of the gas pipeline to Gostivar is passed, the environmentalists from the Government demanded yesterday. They alarmed that construction machines are once again cutting trees on the ridge, where about 200 meters of forest have been usurped. They demanded the machines to be completely dislocated, because they suspect that all ways, hidden from the eyes of the public, are being used for the field work to continue. They do not know at this moment on which route the machines work, whether the originally determined or the shortened route, announced by Deputy Prime Minister for Economic Affairs Koco Angjusev during his last visit to Vodno.

Seventeen citizen associations, who participated in the Coordination Body, together with representatives of several ministries and state institutions and the City of Skopje, once again urged the Government to publicly announce the decision allowing the construction of the gas pipeline to continue on the southern route. They appealed to the City of Skopje, the state and city environmental inspectorate and the public company Parks and Greenery, as the most directly affected, to publicize their views on the pipeline route. Otherwise, say ecologists, they will consider that the government has made a decision on its own.

“MEP, although it has a building permit, does not have a work permit in a protected area. The environmental impact assessment for this project was made back in 2011, and since then the situation has changed a lot. The assessment is very general and it is strange that it is accepted and approved by the Ministry of Environment. The document does not apply to work in a protected area, nor does it specify the quantities of forest that will be cut with these activities on Vodno, or what types of trees enter those quantities. For these reasons, we are demanding a new assessment of the impacts on the environment, especially for the protected area of ​​Vodno,” says Tatjana Stojanovska from” I Love Vodno “.

They say that before taking such a serious step on the mountain, all the risks must be identified in order not to repeat the devastating consequences that left the construction of the road to the ‘Sun City’.

“The main reasons for choosing the southern route are the time and financial aspects. But these aspects cannot be more important than the degradation of our natural wealth. A serious analysis must be made of whether the route cannot be moved to the northern part of the city,” they say. 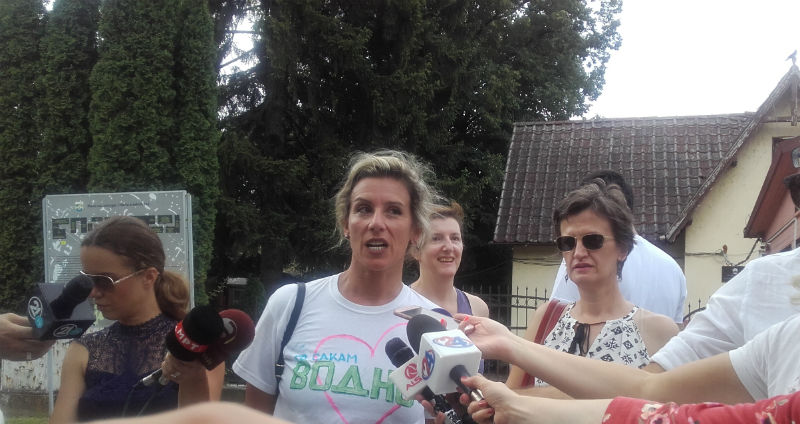 The Government yesterday informed that at this moment Vodno is undergoing only preparatory activities for redesigning the route in order to provide a new route that will provide maximum environmental protection.

“There are no construction activities on Vodno, and the mechanization has been present on the site for four months. In the next period, activities are planned in the areas where no foreseen alteration of the route, ie areas where there is no endangerment of the environment, as stated in the announcement.
Defining a completely new route for this pipeline, according to the Government, is not possible, as it will bring several times bigger problems and damages for the state and the citizens: losing time for the realization of the pipeline, legal issues with land expropriation, loss of the loan with payment to additional large interest rates, serious delay in the implementation of the environmental project pipeline, and thus encouraging further heating with firewood, instead of gas, which endangers the environment.

“MEP prepared a proposal for a new route, which significantly reduces the scope of the wood mass of Vodno, with the new proposal, the scope of intervention on wood mass decreases from 3,000 cubic meters to about 1,400 cubic meters. Additionally, the route is reduced from 25 to 10 meters wide and avoiding parts where there is a thick wood mass, the Government points out, adding that as a compensation of the damaged vegetation, a new, in several times bigger quantities will be planted, forming of new protection areas from Vodno to Matka, and the southern side will also be reforested, reads the government statement.

Under the new MEP proposal, the shortened route is scheduled to move along an existing path, which will be widened several meters in the left and right side. The gas pipeline should pass through the south side of Vodno, which in large part is not forested. It should go to the top of Vodno from Sopiste on the south side, and then move down to Matka.