VMRO-DPMNE refuses to respond to the letter sent by the excluded Saso Mijalkov to the party leadership. The estimates in the “White Palace” are that any further interference into the quarrel with the man they consider the main culprit for the division in the Parliament will bring only harm, especially as it was clearly known who is who, as well as what he worked on over the past years.

Probably they are the only ones who know what exactly is happening between President Hristijan Mickoski and cousins ​​Mijalkov and Nikola Gruevski, because different sources from and around the party are circling the media. There is no doubt that Mickoski won last year’s Congress in Valandovo, thanks to the person who “managed and ruled” with the party for a whole decade, therefore remains the dilemma on where things went wrong over the past ten months, more precisely after the referendum, when, according to our information, was the last meeting between Mijalkov and Mickoski.

The cousins ​​brought Mickoski to the leadership helm

It is a publicly known that the cousins ​​openly supported Mickoski as a successor of Gruevski at the party’s headquarters. For this reason, all the other candidates (Ilija Dimovski, Antonio Milososki, Filip Petrovski, Nikola Popovski, Nikola Todorov etc.) were very angry, so together with some of the prominent members of VMRO-DPMNE they demanded for the postponement of the Valandovo Congress for the purpose of acquiring fair conditions for competing. That did not happen, so Mickoski, who was Gruevski’s adviser while he was at the helm of the government, won without competition, and since then speculation began to circle the public that he would be just an “extended arm” of the cousins. The former party leader was given the post of honorary president, although it was ironically commented that Ljubco Georgievski appointed Gruevski as his successor, and received an honorary post, but later was kicked out of the party.
The reactions among the membership that the new leader is not their autochthonic product, that is, its primary task will be to protect its mentors from criminal prosecution, has not slowed down. In VMRO-DPMNE, they were careful how the information about the closeness between them came out, and soon news “broke” that Mickoski and Gruevski were fighting, which resulted in the former banning the latter to interfere with the running of the party.

“Mickoski has announced from the very start that he will lead the party independently and he proves this today. Of course, at the beginning it took time to grasp the threads and see who is honest and who is in VMRO-DPMNE out of personal interest. Once it slowly surfaced, it was much easier for him to make the moves to consolidate the party. Membership has long demanded it,” Mickoski’s supporters said.

It should be noted that a good part of the people who are now seated in the executive and the central committee were associated with the old leadership. They all raised their hands to exclude Mijalkov from the party, while for Gruevski there was no evidence that he lobbied for constitutional changes. Later, members of the municipal committees of VMRO in Skopje accepted the sharp measures of the leadership without a single objection.

However, party sources briefed that Mickoski and Mijalkov were regularly in touch, and that they even had a meeting right after the referendum. The information coming out of the outcome is diametrically opposite. According to some, the two planned the strategy on how to pass the agreement with Greece, and everyone should be clean (VMRO to prove itself as an uncompromising party, and Mijalkov to solve the problem with the SPO), while, according to others, it was precisely at that time that the quarrel that spilled the last drop occurred. 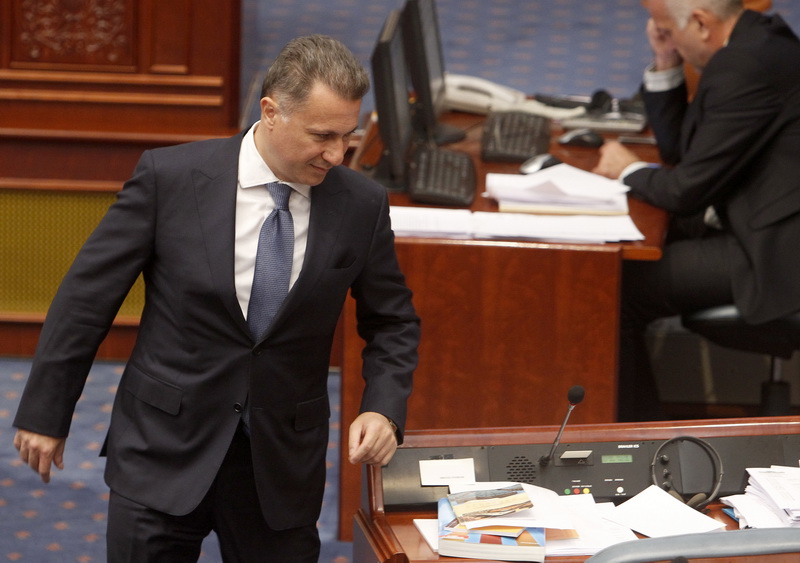 In fact, the VMRO membership this time openly points out that the MPs were the target of blackmail and threats, as well as attempts to bribe a “high-ranking former official, who is still very powerful these days”, but never shared any evidence.

“Knowing that the accusation that got me kicked out of the party is untrue, I decided to let a few days pass, for all members to see that the leadership will not present any evidence against me. The lies that were against me were fabricated for personal interest. I publicly call you to present evidence to the organs of the party and the public for the accusations due to which I was formally excluded from the party. Instead of cowardly placing false accusations, show the evidence that I forced someone to do something or I tried to bribe them,” Mijalkov wrote in his letter to Mickoski.

The ‘chief” directly asked the party leader why, if he wanted to defend the name, he did not stand firmly behind that cause with everyday protests and attacked him because “someone” promised that VMRO would not block the process for resolving the name, but would only express disagreement. He accused him of cutting a deal with the SPO to be removed from the procedure and secretly supported the name change so that he could come to power with a clean slate, unburdened to resolve such a process. He notes that the rumors about the criminal wealth of the family Mijalkov do not hold water, because Mickoski with his professor’s salary of 500 euros managed to ge to several hydroelectric power plants, precisely during the rule of VMRO-DPMNE.

It is speculated that Mijalkov, apart from Mickoski, also ended his collaboration with Gruevski. The coming days are expected with uncertainty to see whether the observer would succeed to save himself from prison sentence, abandoned by his cousin and the new leadership.