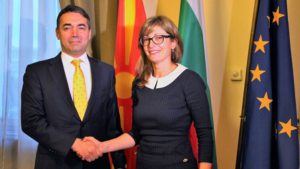 The Bulgarian – North Macedonian joint intergovernmental commission on trade, economic co-operation will hold its first meeting in Skopje on March 6 and 7 2019, ten years after it was set up.

This emerged after talks in Sofia on February 25 between North Macedonia’s Foreign Minister Nikola Dimitrov and his host and counterpart Ekaterina Zakharieva.

Dimitrov’s visit is taking place less than a week after Bulgaria’s National Assembly voted unanimously to approve the ratification of North Macedonia’s Nato accession protocol, becoming one of the first Nato member states to do so.

The North Macedonian foreign minister said that it was in the genuine interest of his country to implement the bilateral good-neighbourliness treaty with Bulgaria.

The treaty was signed in 2017 and approved by the legislatures in Sofia and Skopje in January 2018, as a move to end years of difficulties in relations between the two countries, including over issues of history and identity.

Dimitrov said that with the signing of the treaty in 2017, his country had opened a new page in its history.

“We are determined to write it with your support,” he told Zakharieva.

Zaharieva thanked Dimitrov for his speech on February 6, at the signing in Brussels by permanent representatives to Nato of North Macedonia’s accession protocol, in which Dimitrov expressed thanks to the Bulgarian people and the prime minister for the support and example that Bulgaria had provided about resolving disputes in the Balkans.

The signing of the treaty was just the beginning, Zakharieva said.

“Let us not stop now with our efforts at rapprochement and not allow policies from the 19th century to stand in the way of our common future with the Republic of Northern Macedonia,” Zakharieva said.

Zakharieva outlined several tasks of immediacy for both countries.

“It is important to maintain the pace of work of the Joint Multidisciplinary Expert Commission on Historical and Educational Issues,” she said.

“Let’s build such a friendship that no storm can destroy it,” Zakharieva said.

She described the meeting scheduled for March of the joint intergovernmental commission on trade and economic co-operation as a positive development, emphasising that this was the commission’s first meeting since its inception 10 years ago.

Greater economic and infrastructure connections with the Republic of North Macedonia should also be pursued, she said.

“We cannot travel the 208 km to Skopje in four hours,” Zakharieva said. “This is the way of rapprochement – to correct the historic injustice by building the missing infrastructure between our countries,” she said.