Deputy PM for Economic Affairs Koco Angjusev told Tuesday’s press conference in the Government that the increase in industrial production by 12.1 percent in June 2018 compared to May 2017 and growth of average monthly salary in May show that Government’s economic policies are good and yield results in the long run.

Economy is measured by numbers, and not by politicizing. Industrial production increase of 12.1 percent is highest growth recorded in recent period. This shows that the measures taken by the Government are good and are on the long run, and confirmation for this is the growth of industry by 5% in the first six months of 2018 compared to same period last year as well as growth of 7.1% increase of average monthly salary in May, which now amounts MKD 24.500, Angjusev said, adding that also exports increased by 14.1 percent in period from January to May 2018. 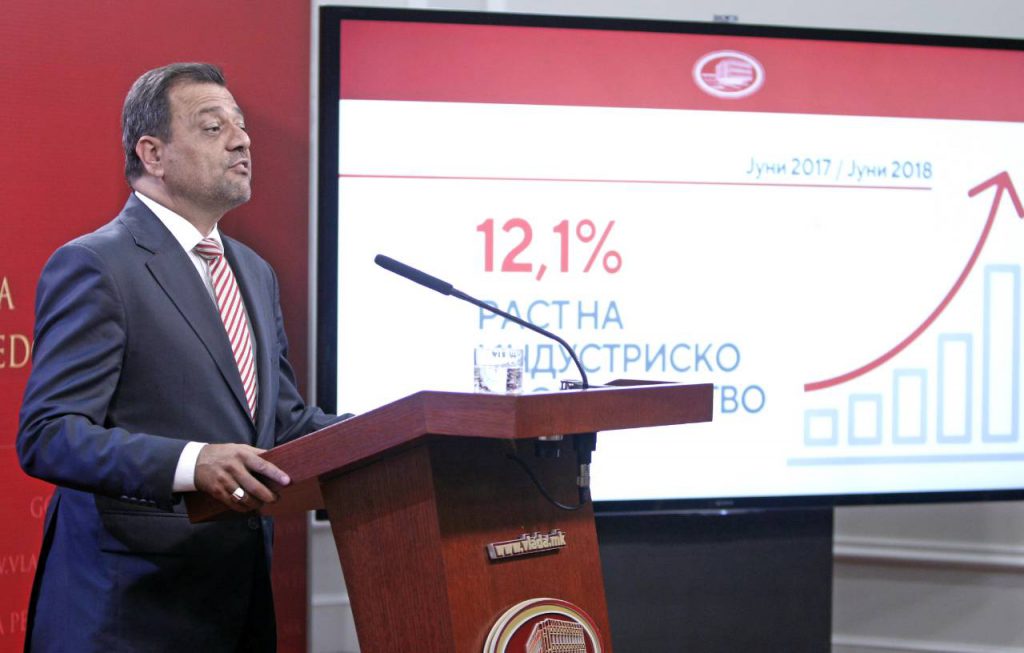 It is necessary citizens to use a little more patience and numbers will appear at the end, he said.

Asked if he expects the planned percentage of the capital investments to be realized, Angjusev said although there is a slight slowdown in realization of the first six months, but added that he is optimistic and believes that 90 percent of the planned investments will be realized by year-end.

“Slight slowdown is due to the fact that it is necessary to bring the projects to a normal technical level so that we do not have unnecessary annexes, said Angjusev, adding that the realization of capital investments among state companies MEPSO, ELEM, Public Enterprise for State Roads is much higher.”

Angjusev does not expect that the referendum will significantly affect the realization of capital investments, because it is projected to cost EUR 3.5 million, which is less than 1 percent of the planned EUR 400 million for capital investments.

“All political developments and the referendum negatively affect the economy, but I consider that it will not significantly affect the country’s economic growth,” Angjusev said.

He also underlined that the referendum is organised aimed at Macedonia to move forwards in Euro-Atlantic integration and it means greater investments in the country and economic growth, based on the experience of all countries that have joined the EU and NATO.