At least 25 police officers were injured and seven people arrested, police report in Athens over the mass protests against the Prespa Agreement with the Republic of Macedonia.

Demonstrators threw rocks, flares, firebombs, paint and other objects at riot police who responded with repeated volleys of tear gas. Some protesters jumped over a fence and tried to scale the steps, but officers chased them back down. One man draped in a Greek flag attacked police with a large stick, while others swung big flags on wooden poles and struck officers.

People attending the rally said large clouds of tear gas led many to abandon the protest. The square in front of parliament had nearly emptied out by early evening, though small groups of protesters continued to clashed with officers. Some protesters also attacked photographers, injuring four, one of whom was hospitalized and also had his camera stolen.

Greece’s parliament is expected to start a debate Monday on ratifying the deal and vote on it by Friday. Macedonia’s parliament has already approved it, agreeing that the country would go by the name North Macedonia.

Macedonia and Greece reached the agreement in June to end a decades-long dispute over Macedonia’s name, which Greece says harbours territorial claims on its northern province of the same name.

Protesters are against the deal because they believe that any use of the name Macedonia in the neighbouring country’s name is a usurpation of ancient Greek heritage and implies territorial claims on Greece. 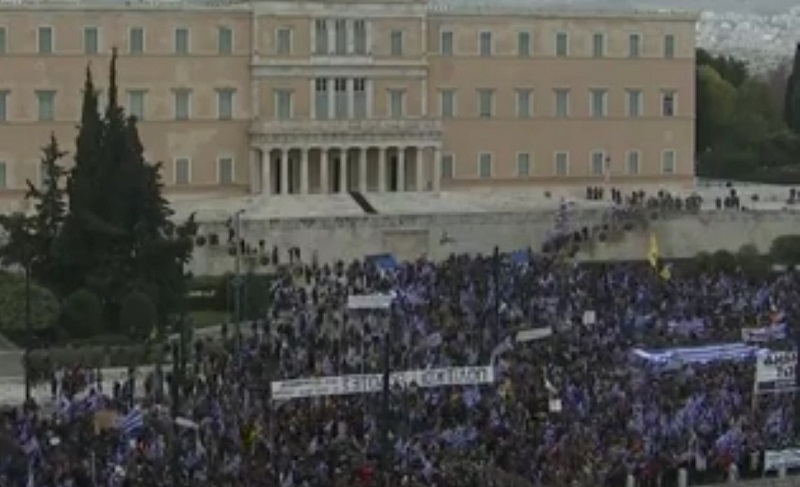 A statement from Prime Minister Alexis Tsipras’ office blamed “extremist elements and members of Golden Dawn” — an extreme-right, anti-immigrant party – for the clashes on Sunday.

“In our democracy, citizens’ free expression is an inalienable right, even for those who want to abolish democracy … It is also the duty and obligation of those of us who do believe not to allow them. Let’s isolate and condemn them,” the statement said.

Police said in a statement that officers had been attacked by “organized groups of individuals with special ferocity, (using) rocks, iron bars, wooden clubs, firebombs, etc. … Police forces acted according to operational plans and orders, showed restraint and professionalism and, using the appropriate methods, repelled the attacks.”

Protest organizers said they hoped to attract more than 600,000 people. Police released an official estimate of 60,000.

While organizers had said about 3,000 buses would travel from northern Greece alone, police said that a total of 327 had arrived from across the country Sunday afternoon.

Among the people who addressed the protest were former conservative Prime Minister Antonis Samaras, a member of the Mount Athos monastic community and a Greek-American former politician, Chris Spirou, once a member of New Hampshire’s House of Representatives.