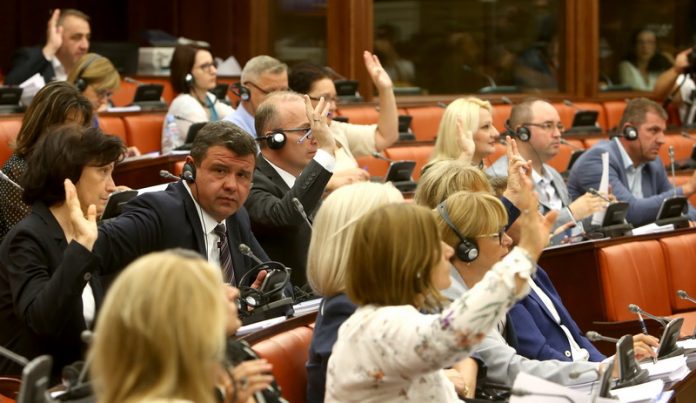 The government accepted four of the twenty amendments submitted by VMRO-DPMNE on the first day of parliamentary debate on the prosecution draft-law. The Social Democrats and the DUI have agreed to allocate 0.4% of the budget for the new Prosecution Office for Organized Crime and Corruption, that is, the regular prosecutor’s office. In addition, the new public prosecutor will also have to pay damages if someday it turns out that he abused his position, and will be legally obliged to be open to the public.
However, the four amendments are only one-fifth of the objections of the main opposition party. VMRO-DPMNE says key issues have yet to be discussed: the status of the cases opened by the SPO, the future of other Special Prosecutors, and the name of the new chief of the newly-formed Prosecutor’s Office, which the opposition wants to propose, and not let Vilma Ruskovska be the one. What’s new is that VMRO-DPMNE proposes that the new chief might not even be a prosecutor, but he/she could be a professor.
Almost fifty amendments to the law proposed by the government have been submitted to the parliamentary Committee on European Affairs led by President Artan Grubi. Half of them are coming from the opposition, but it is interesting that both SDSM and DUI have submitted amendments to the law. Ali Ahmeti’s party has objections to the use of the Albanian language, as well as to make decisions in the Council of Prosecutors according to Badinter’s majority. SDSM, meanwhile, says the adjustments they made after the law was drafted were aimed at not granting amnesty – that is, for everyone involved in crime to be held accountable.
“One of the amendments on which we immediately agreed with the opposition is about the number of days of annual leave. The bill stated that they were entitled to 30 working days. We reacted that prosecutors should be given days off according to the law, according to the seniority that the opposition has accepted”, SDSM commented.

The government and the opposition immediately rejected the proposal for appointing a foreigner as the head of the newly-formed prosecutor’s office.
The session on European affairs lasted for a few minutes, as Grubi needed to read the agenda, and say how many amendments had been submitted, and give the parties room to agree before the law is handed to lawmakers. According to parliament sources, the session will resume on Monday, with the government and the opposition having a full weekend available. These next two days, the Parliament will be discussing changes in government (the appointment of Nina Angelovska as Minister of Finance) which is the perfect alibi for political entities to find a compromise on the issue on which the date of negotiations with the European Union may depend. The ruling and opposition working groups will meet again today.
Meanwhile, the Council of Public Prosecutors, with nine votes in favor and none against, decided on Wednesday that the conditions for launching a procedure for the dismissal of Special Prosecutor Katica Janeva, who is in detention as a suspect in the “Racket” case, have been met. After the session, council president Kole Shteriev said that a report would be drawn up and forwarded to Parliament, which should continue the procedure for dismissal of Janeva.
“In order to do so, the Council should draw up a report with an established factual situation and submit it to the Parliament, which, in accordance with its powers, will continue the procedure. Since we are limited in reporting, the report will contain enough data that is further detrimental to the Parliament in the further procedure”, Shteriev said.
According to Shteriev, it is the first time that the Council of Public Prosecutors is facing such a situation in which the head of the Public Prosecutor’s Office has been ordered detention. Prosecutors of organized crime and corruption have suspected Janeva of abusing her official position and authority and provided suspect Orce Kamchev in the “Empire” case, with the change to come out of detention and get a temporary passport.
The chairman of the Committee on Elections and Appointment Issues Ilija Dimovski says it is good that the Council has resisted pressure from various centers of power.
“I hope that by the end of the whole procedure all bodies called upon to act will not allow political interests to invalidate legal provisions that are precise and clear,” Dimovski says.
He says the report lists three basic qualifications, according to which Janeva performed her job illegally, recklessly and unprofessionally. “Once the procedure is completed in the parent committee, the process is transferred to the Parliament. Janeva’s dismissal requires a two-thirds majority in parliament, as well as the Badinter majority”, Dimovski explains.
A two-thirds majority is also needed to pass the new prosecution law, but the government does not currently have it, so the government insists on a deal with the opposition. Otherwise, the government said they had a plan B. VMRO-DPMNE responded that in such a case, the new law would only apply until the change of government.